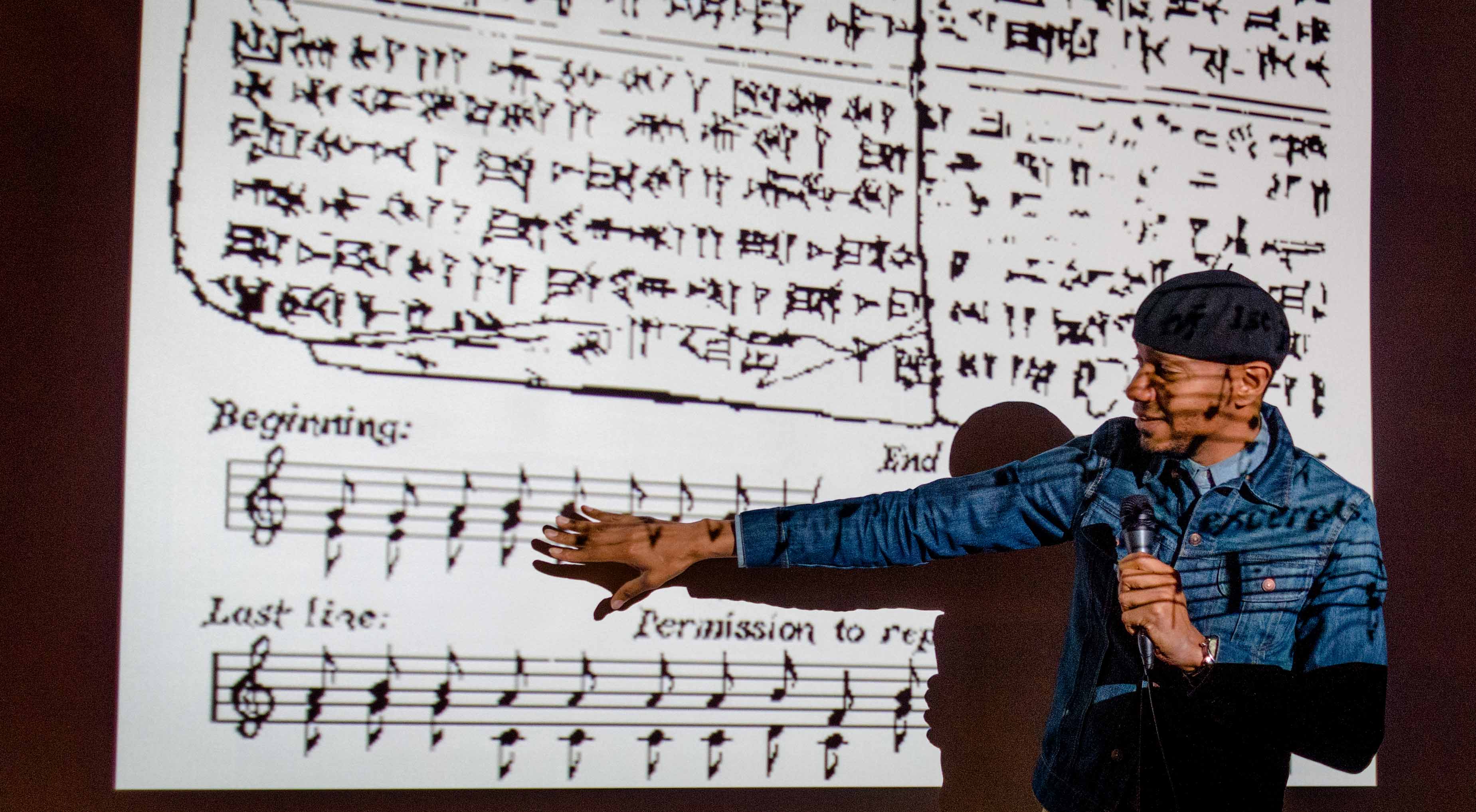 On August 5, 2008 a new app called I Am Rich appeared in Apple’s App Store. The app, created by Armin Heinrich, cost $999.99 and was a “work of art with no hidden function at all.” Instead, the app’s icon, a glowing red gem, was nothing more than a status symbol that a user could proudly display on a phone or tablet. When the app was activated the following mantra appeared: “I am rich / I deserve it / I am good, / healthy & / successful.”

The I Am Rich app is the perfect example of conspicuous consumption if ever there was one. As Paul D. Miller (aka DJ Spooky) writes in the introduction to his latest book, The Imaginary App (co-edited by Svitlana Matviyenko and published by MIT Press), Apple removed I Am Rich from the App Store after 24 hours, but not before it had generated thousands of dollars in sales. 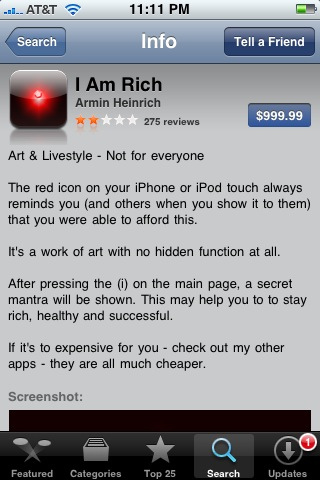 The philosophical questions raised by this functionless app, as both a consumer product and art project, is what interests Miller most. “The exponential growth of apps has unleashed a huge wave of creativity,” Miller says. “The question ‘Why?’ The answer: ‘Why Not?’ The Imaginary App says, ‘Let us see how that would apply to apps.’ Every time you touch an app, you are basically just touching a metaphor, a conduit into an operating system linked to more metaphors layered on metaphors about the unfolding equations defining the date you see on the screen in front of you.”

The Imaginary App sets out to explore what is both “possible and plausible” today. As Miller explains, we are living in a time when the total number of app downloads (45 billion from Apple’s App Store and 50 billion from Google Android’s Play Store) exceeds the “number of words humanity has generated in its entire existence as a species.”

One of the highlights of the anthology is a section of truly imaginary apps conceptualized by artists, apps like $upermark-it by Matt Fenstermaker, which converts your grocery list into a map showing where each item is located on the shelf in your favorite store, or Telephort by Christoffer Laursen Hald, which moves “the user from point A to point B” through teleportation.

It was ideas such as these that Miller explored at the inaugural Gwarlingo Salon, hosted by Toni Nagy and Wes Aldrich in Dublin, New Hampshire on Saturday, April 4th. And what a kickoff! It was DJ Spooky’s New Hampshire debut with 50+ people from the Monadnock area, Northhampton, Bennington, and Brattleboro turning out.

In addition to discussing some of the concepts in The Imaginary App, Miller also talked about the art of remixing, the connection between app icons and record album design, and copyright clashes in hip-hop culture, he showed us how Google is using drones to map the ocean floor, and introduced us to Hatsune Miku, a Japanese holographic animated projection who is a crowd-sourced, virtual idol with hit songs and sell-out stadium shows (seriously). The presentation was followed by a book signing and a dance party DJ-ed by DJ Spooky himself. 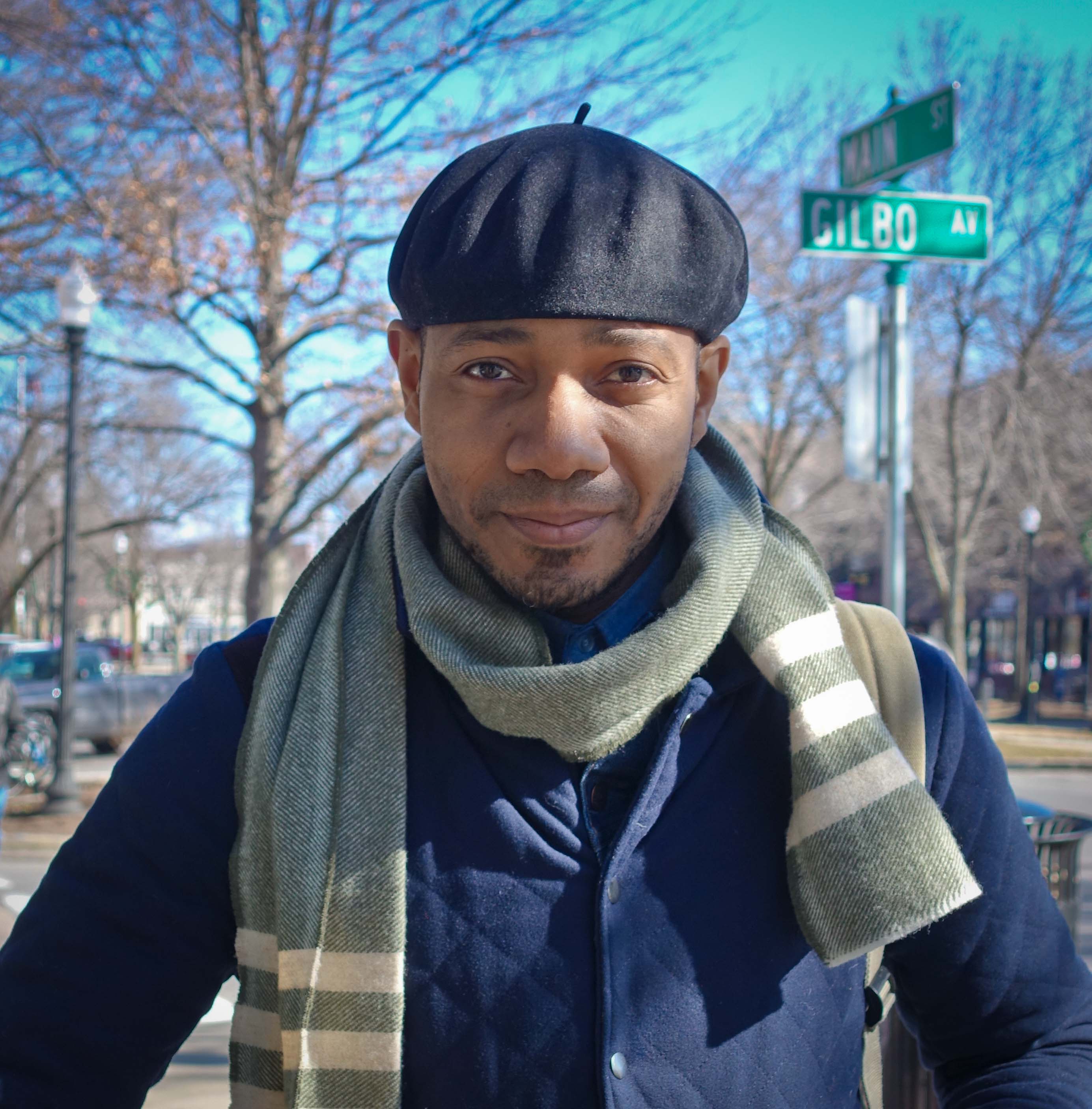 
DJ Spooky has been featured everywhere from Elle to CNN to SyFy. The first artist-in-residence at the Metropolitan Museum of Art, Miller has produced and composed work for Yoko Ono, Thurston Moore, and scores of artists and award-winning films. His art has appeared in the Whitney Biennial; The Venice Biennial for Architecture, the Ludwig Museum in Cologne, Germany, and the Andy Warhol Museum. Miller’s deep interest in reggae and dub has resulted in a series of compilations, remixes and collections of material from the vaults of the legendary Jamaican label, Trojan Records. Other releases include Optometry (2002), a jazz project featuring some of the best players in the downtown NYC jazz scene, and Dubtometry (2003) featuring Lee ‘Scratch’ Perry and Mad Professor. Another of Miller’s collaborations, Drums of Death, features Dave Lombardo of Slayer and Chuck D of Public Enemy.

“It was so refreshing and exciting to be in the rural place where I live experiencing a contemporary art discourse,” one artist wrote the next morning. “Food for the brain!” “Thanks for arranging a fascinating evening,” another salon-goer said via email. “We discussed, debated, and translated DJ Spooky on the way home.” “Thought provoking.” “Amazing and world-class.” “Fun!” “A window into a new world.” “I look forward to more!” Providing “food for the brain” is what Gwarlingo’s salons are all about. To discover new ideas, while having some fun along the way.

Unfortunately, we had limited space for this first event, but if you live in striking distance of the Monadnock region and would like to know about future salons, please email me, message me on Facebook or Twitter, or post a comment below.

A special thanks to Paul D. Miller, Toni Nagy, and Wes Aldrich (of Hug the Dog) for making this salon possible, and kudos to everyone who came out on the holiday weekend. And lastly, thank you Grace Aldrich for all of your help and support!

Here are some highlights from Gwarlingo’s first-ever salon and DJ Spooky’s debut New Hampshire event. You can purchase The Imaginary App from Amazon or directly from MIT Press. 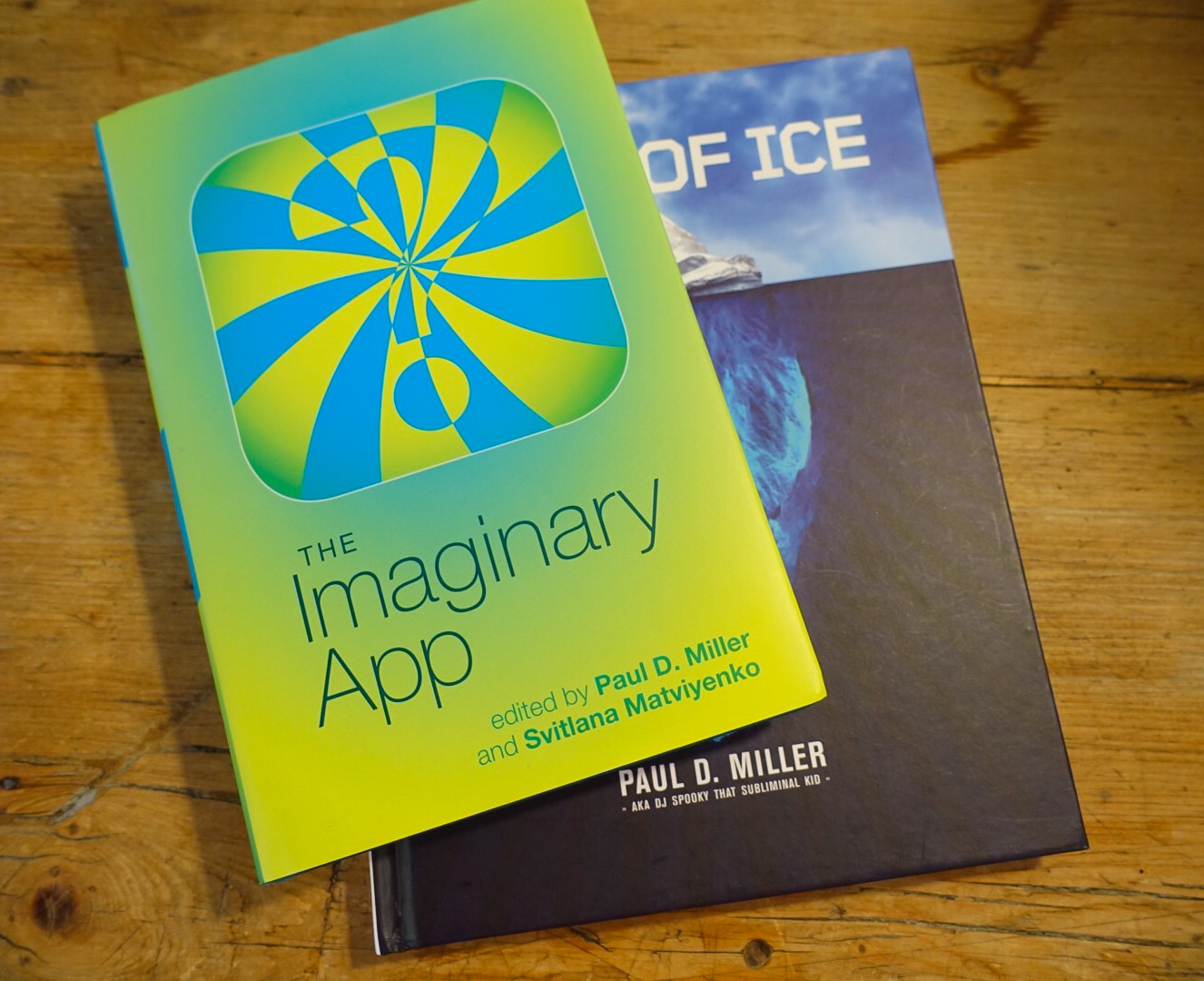 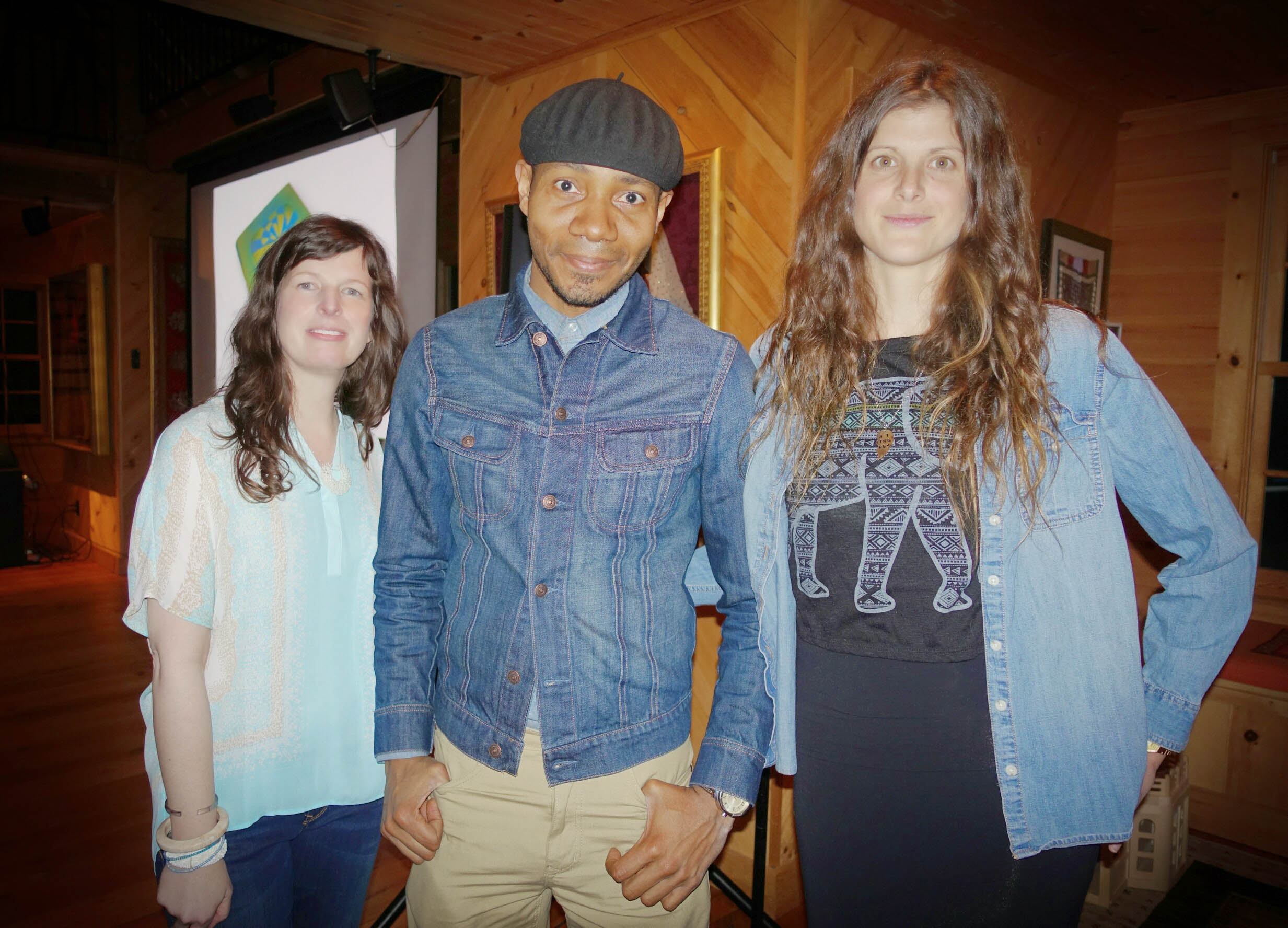 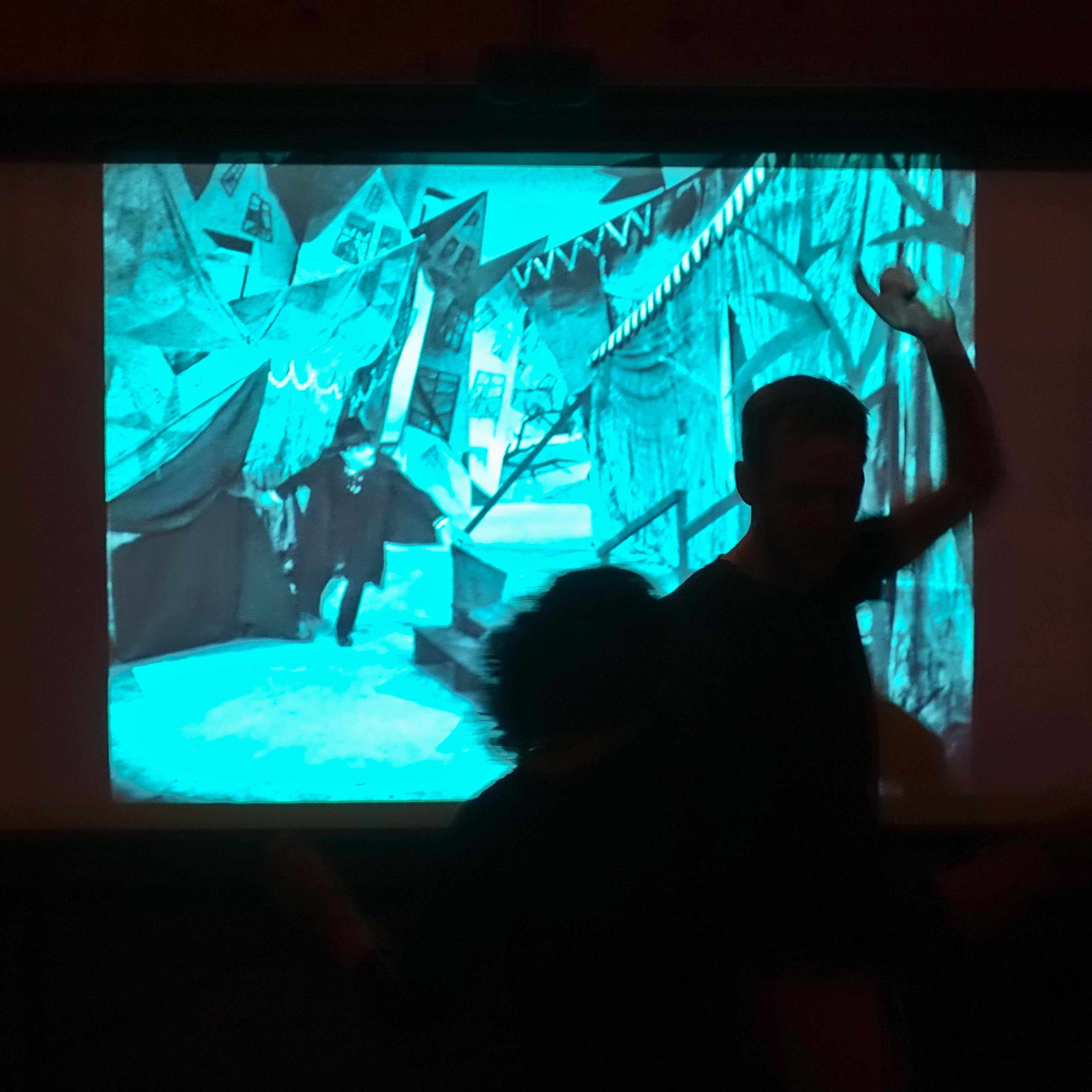 Miller recently wrote a new score for the silent German Expressionist film The Cabinet of Dr. Caligari, which was projected during the dance party (Photo by Michelle Aldredge) 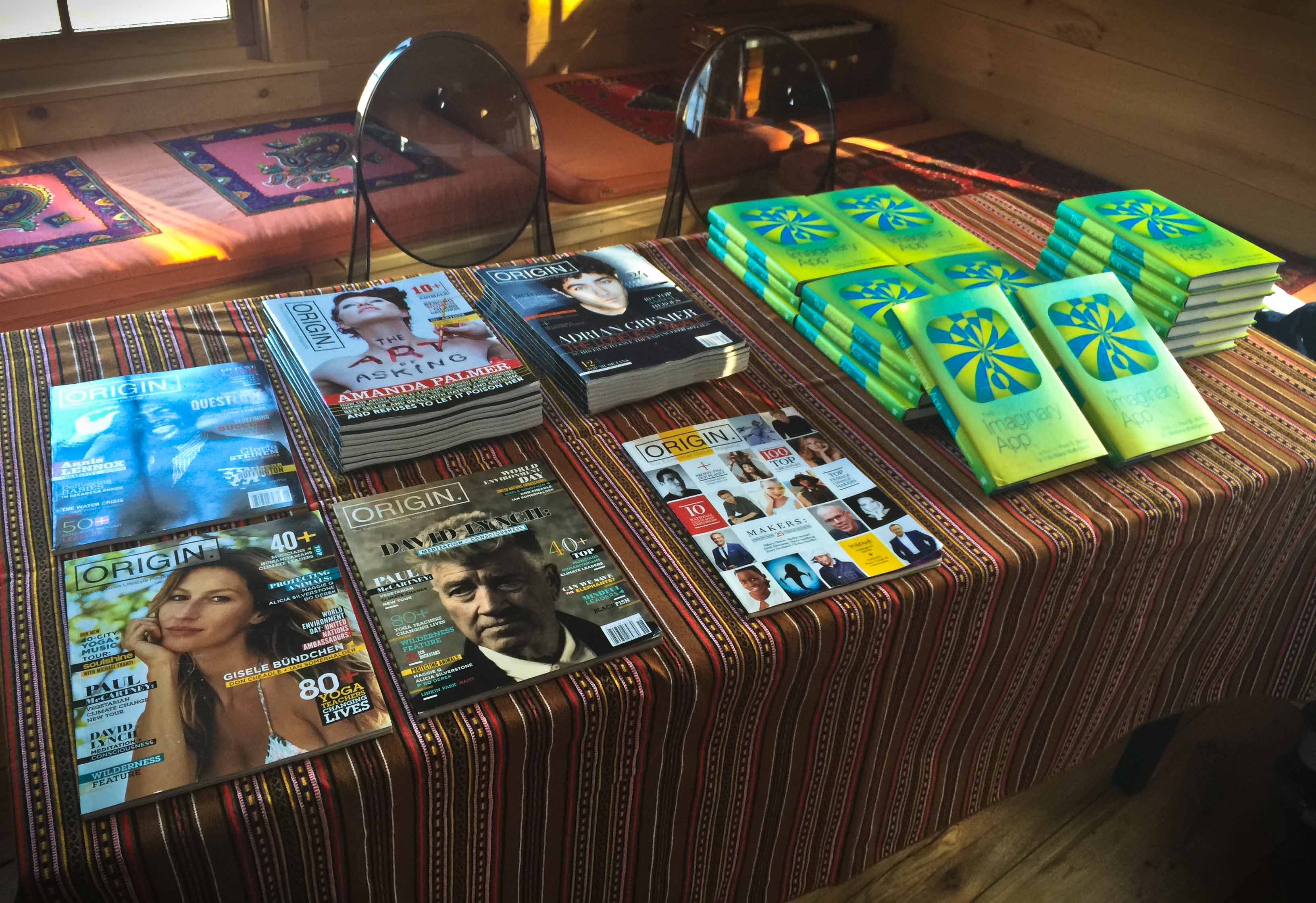 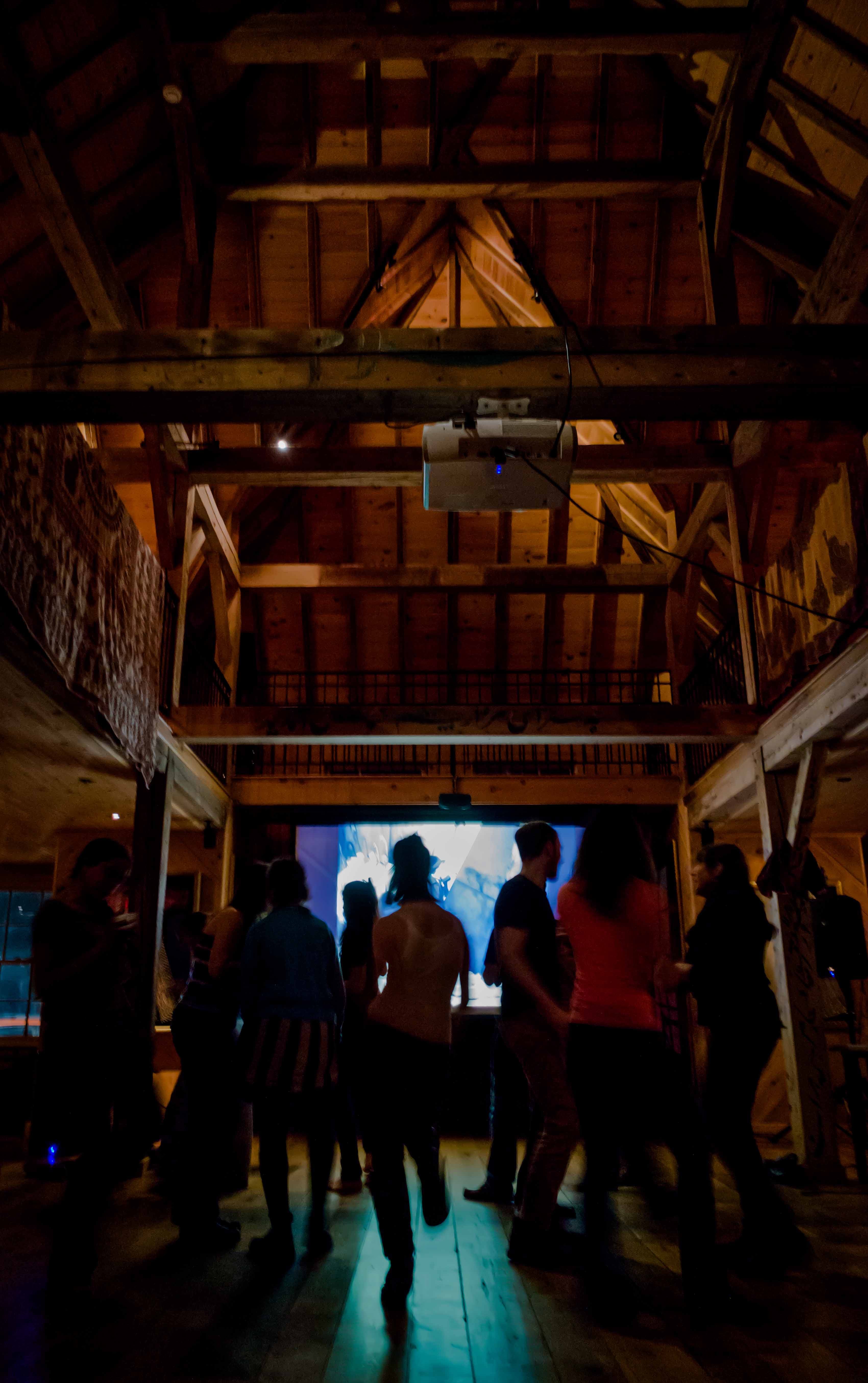 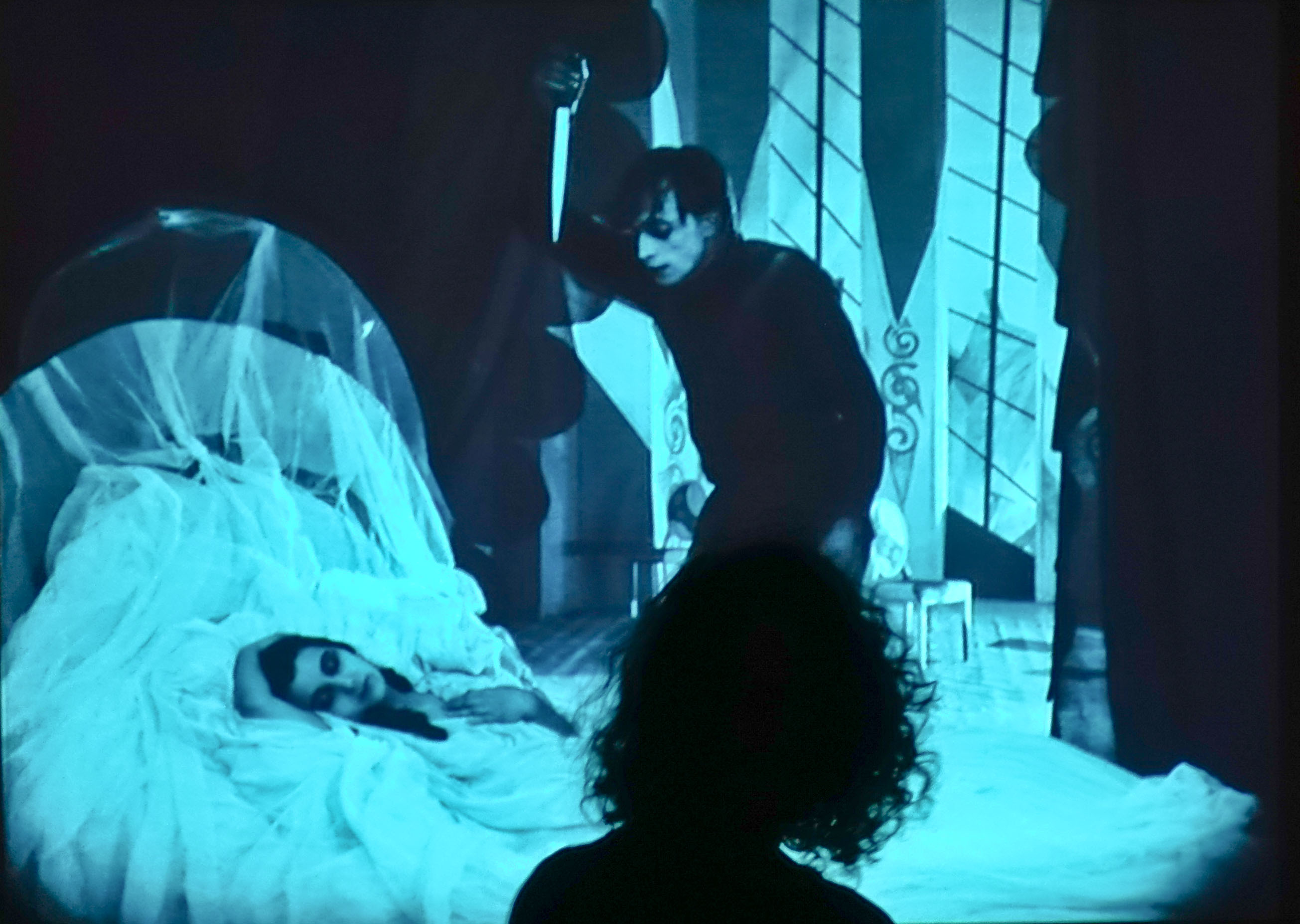 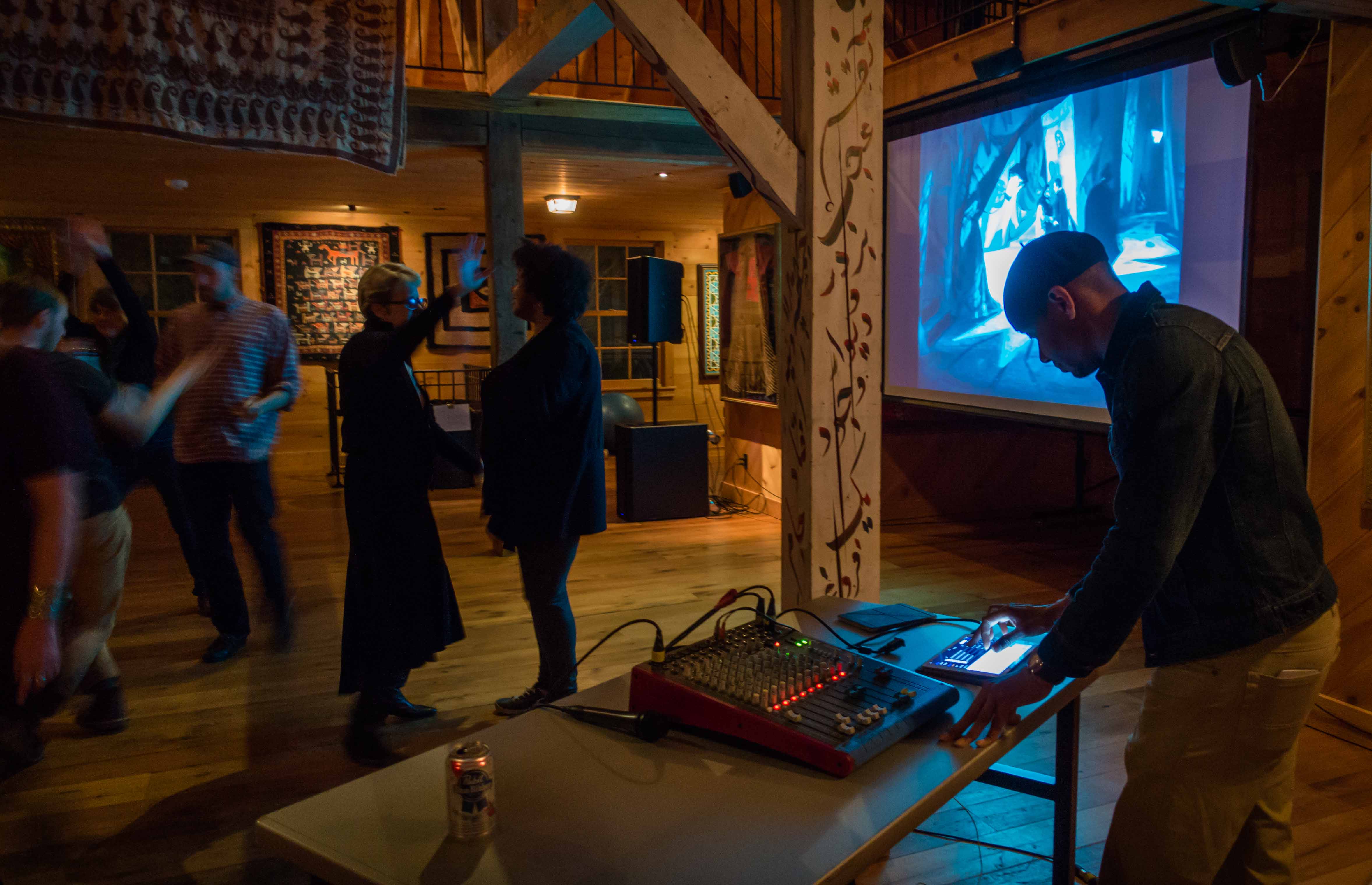 Miller uses his own DJ Spooky App on his iPad to mix music for the salon. The DJ Mixer app has had more than 14 million downloads. (Photo by Michelle Aldredge) 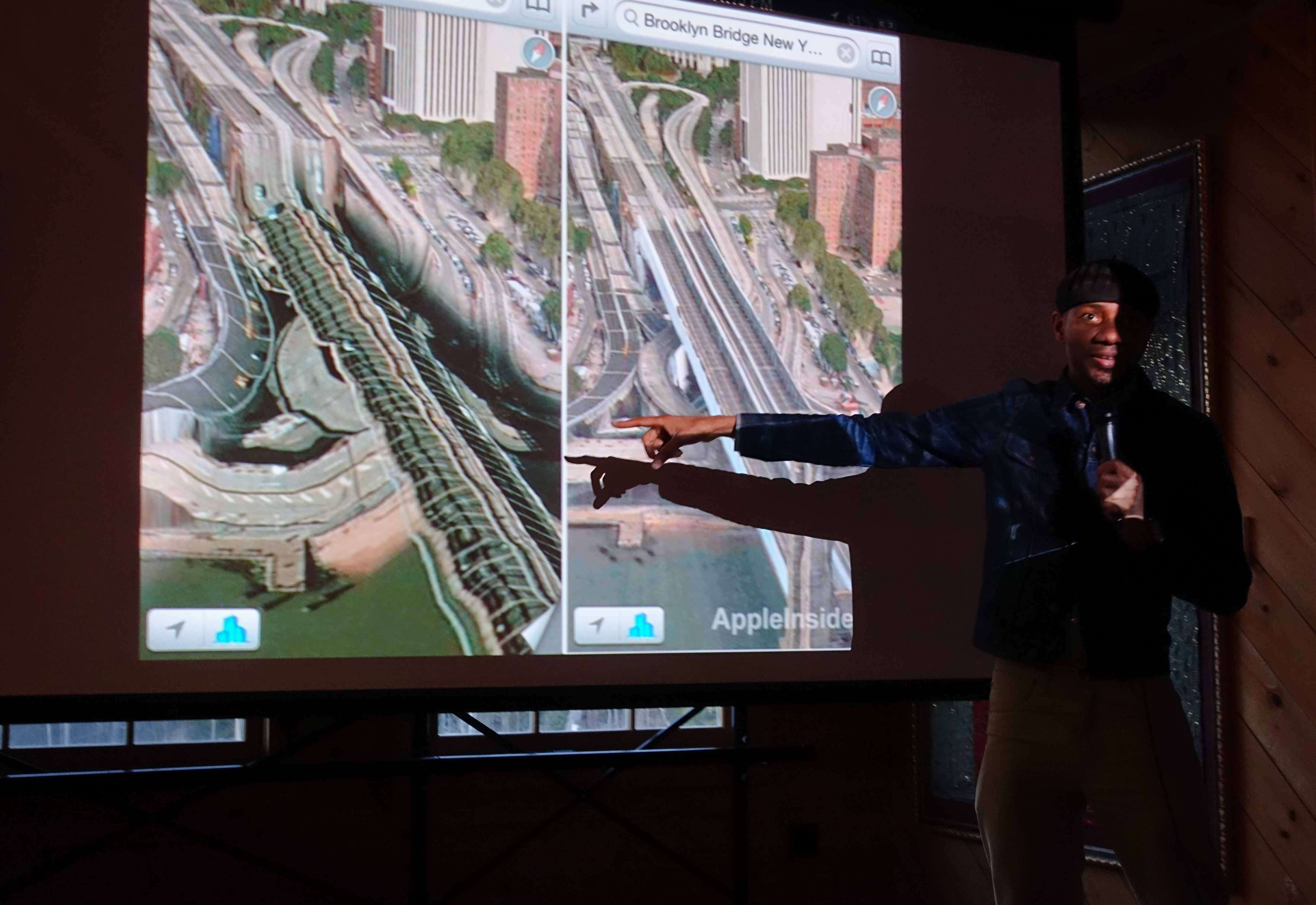 Miller shows us images from the Apple Maps app debacle, in which a glitch transformed locations like the Brooklyn Bridge into artful distortions. (Photo by Michelle Aldredge) 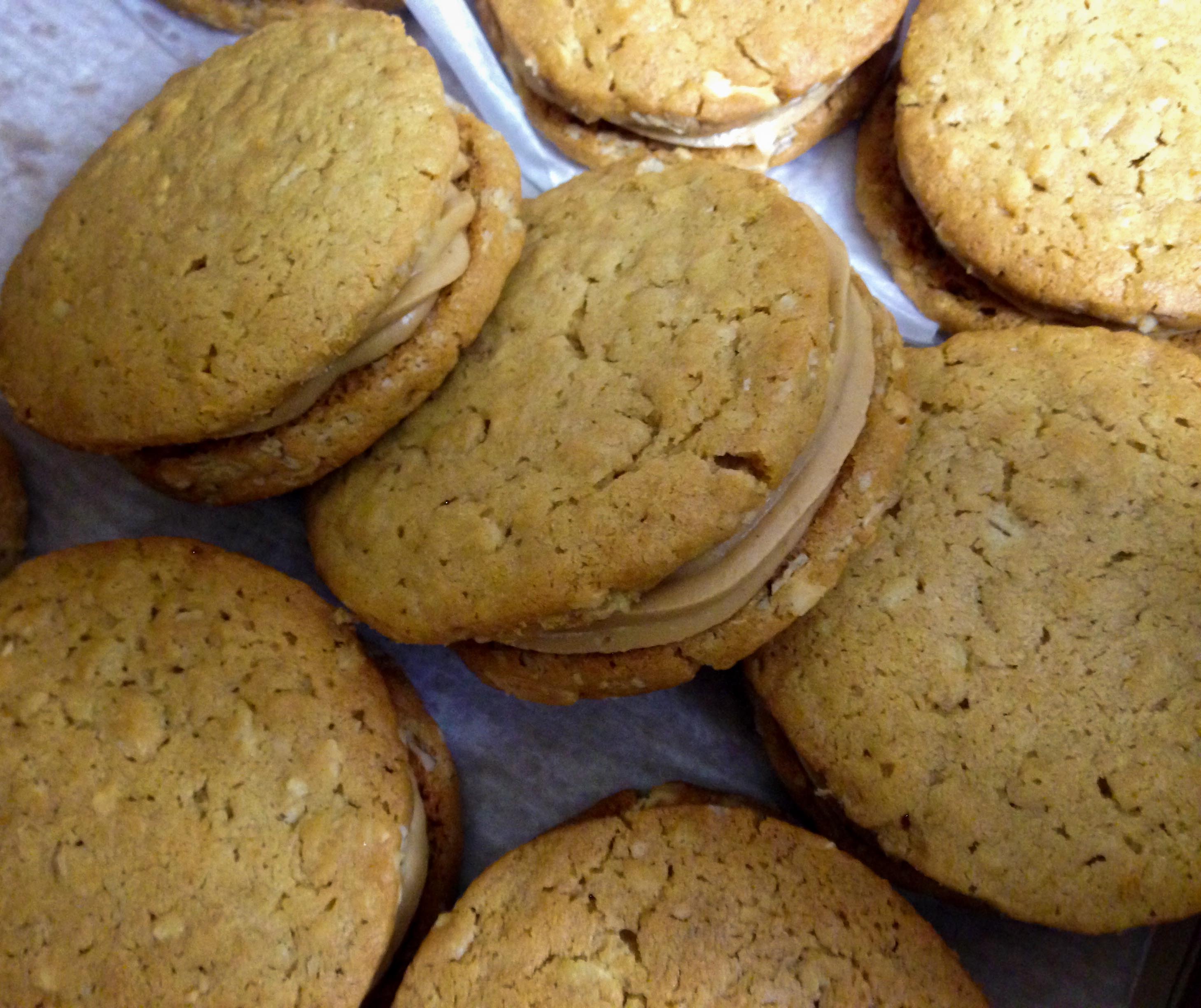 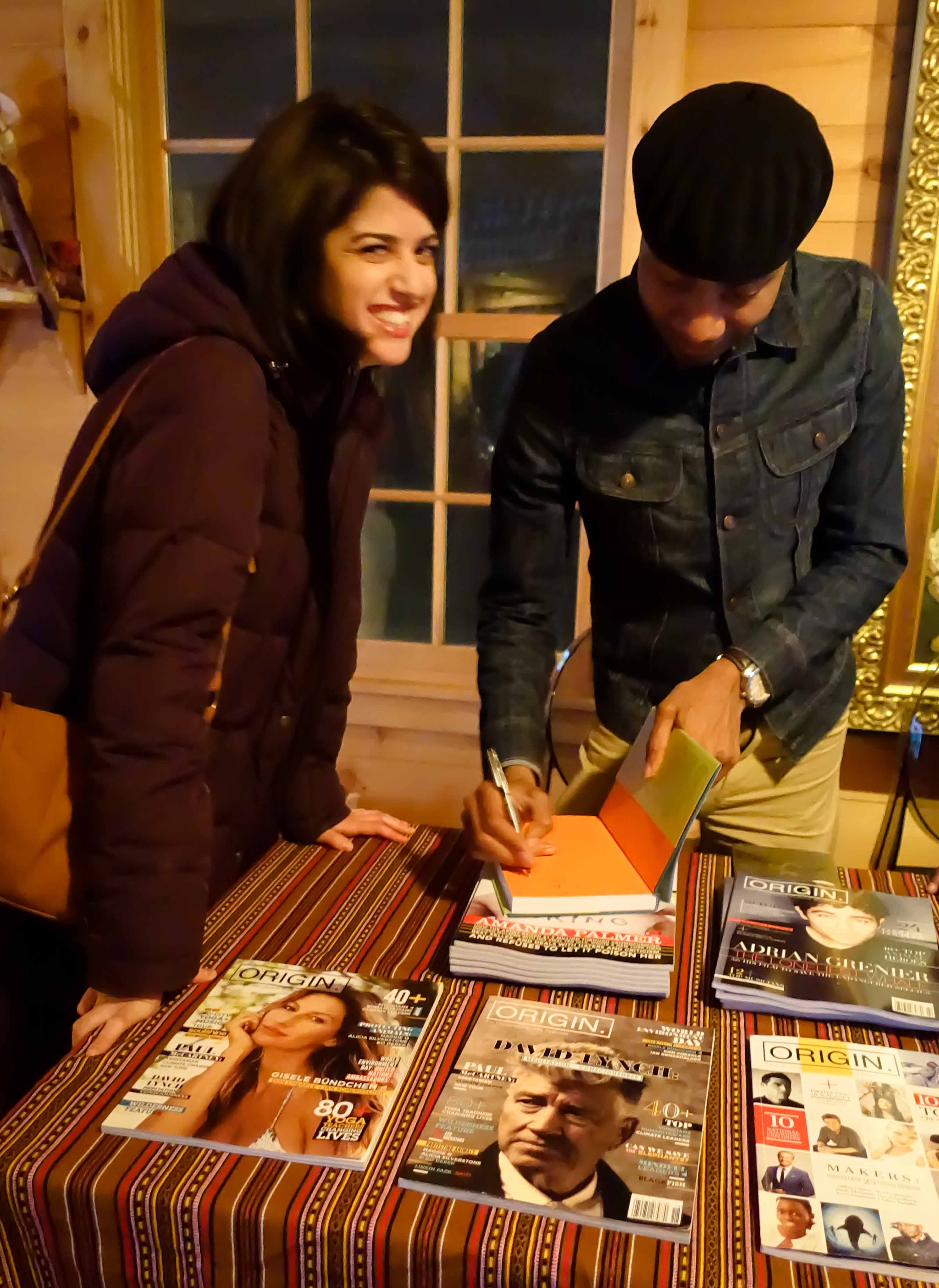 Paul signs a copy of The Imaginary App for Giordana Diaz. (Photo by Michelle Aldredge) 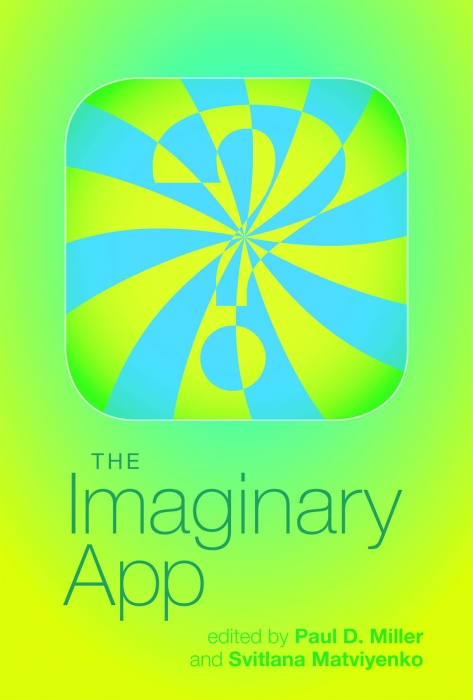 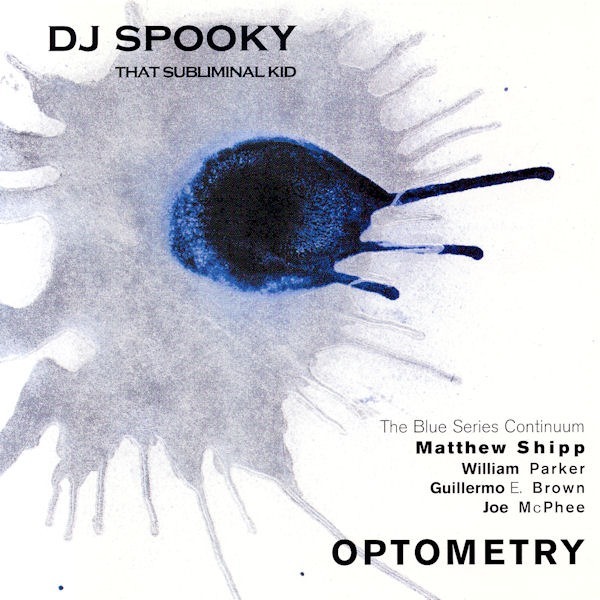 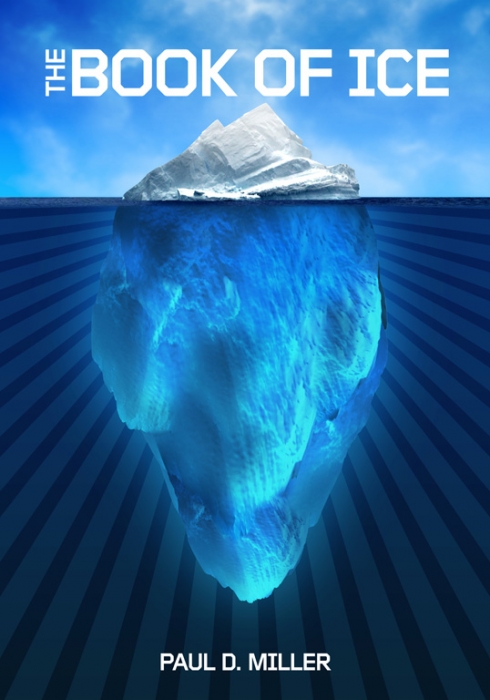