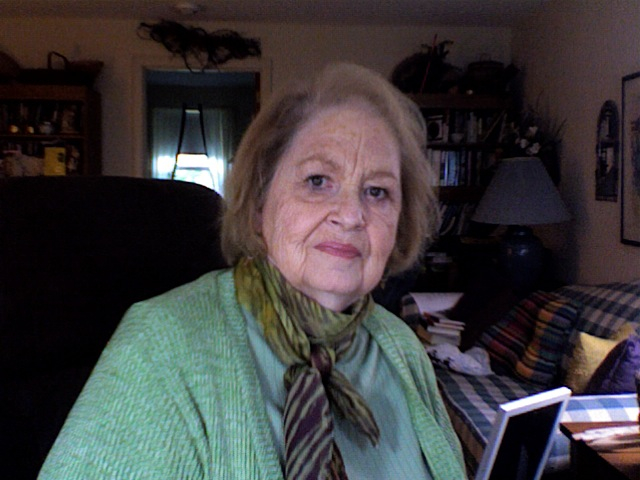 Patricia Fargnoli published her first book of poetry at the age of 62. 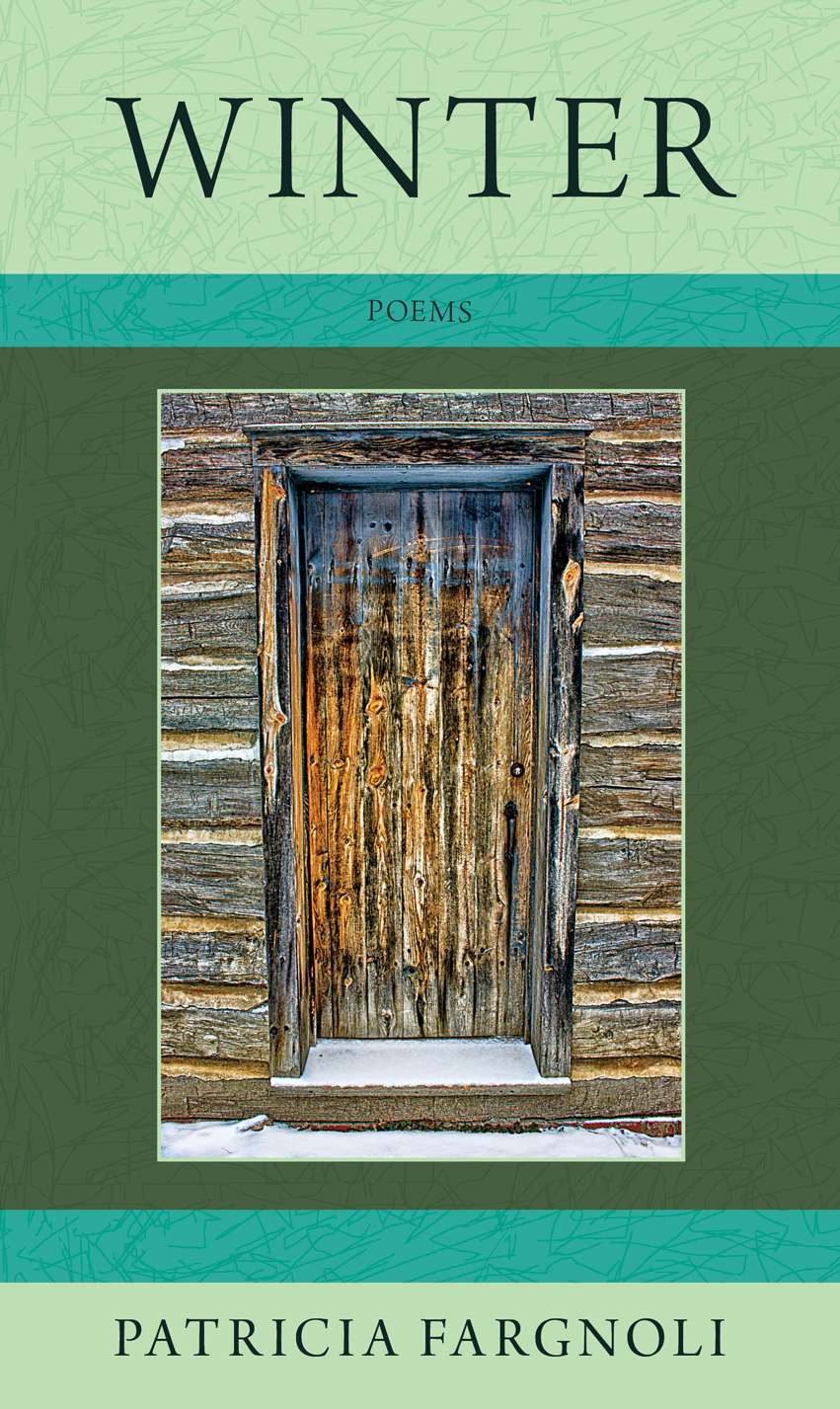 “I began writing poems in high school and had a few (terrible ones) published in the school paper,” Pat explained by email from her home in Walpole, New Hampshire. “And I had taken poetry classes a couple of times in my 20’s at high school Adult Ed programs and the Y, but I didn’t become seriously dedicated to learning the craft of poetry and reading and understanding other poets, until I enrolled in a graduate poetry class taught by Brendan Galvin at Central Connecticut State University. I took that class several years running and met a group of women….7 of them…who later formed a poetry workshop and met regularly to critique each other’s work. I was in my late 30’s at the time I think. But it wasn’t until my 40’s that I began to be published in the journals and not until I was 62 that my first book found a home.”

For many years Fargnoli worked as a clinical social worker, but her story proves that it’s never too late to switch career paths. Today, Pat has five published books to her name. She also served as New Hampshire Poet Laureate from 2006-2009 and has had writing residencies at The Macdowell Colony, Dorset Writer’s Colony, and Wellspring House.

I asked Pat if she hat any advice to share with older readers who are trying to launch an arts or writing career later in life. “Dedication to reading many poets, and to learning all you can about the craft of poetry is absolutely necessary. As is Persistence (note the capital P)….in this competitive poetry world, that is much needed. Just keep on writing and revising and learning and sending out work. It is also very helpful to have a poetry community…others who love poetry and who encourage you and support your work (as you do theirs).”

Fargnoli’s newest poetry collection, Winter, was the perfect Sunday Poem choice for this weekend, as we welcome the Winter Solstice and prepare for Christmas. Happy holidays!

If you have seen the snow
under the lamppost
piled up like a white beaver hat on the picnic table
or somewhere slowly falling
into the brook
to be swallowed by water,
then you have seen beauty
and know it for its transience.
And if you have gone out in the snow
for only the pleasure
of walking barely protected
from the galaxies,
the flakes settling on your parka
like the dust from just-born stars,
the cold waking you
as if from long sleeping,
then you can understand
how, more often than not,
truth is found in silence,
how the natural world comes to you
if you go out to meet it,
its icy ditches filled with dead weeds,
its vacant birdhouses, and dens
full of the sleeping.
But this is the slowed-down season
held fast by darkness
and if no one comes to keep you company
then keep watch over your own solitude.
In that stillness, you will learn
with your whole body
the significance of cold
and the night,
which is otherwise always eluding you.

When Will the Cows Come Home?

When the river freezes over and the pot boils
When the cat leaves the corner, when the tulips leave the bed

Where the village is sleeping, the cows will come to the barn
Swishing their long tails, nodding their heads

If you have been waiting too long, the cows will come for you
If you believe in cows, they will come to your hand

If you hold out sweet grass in the late afternoon’s last hour
From the greener pastures, they will surely come to you

After what has gone around, must come around,
They will come home

Go with the flow of the river, the cows will come home
After your actions have spoken louder than words

The cows will come home

All things come to those who wait
Cometh the hour, cometh the cows

Better late than never, everything in its own good time
The cows will come home

The town’s a ruin.
I think the landscape’s made it so.
Hemmed in on the east:
the steep cliffside of Fall Mountain
glowers like a forehead casting its shadow.
And then the Connecticut River, and the broken
Vilas Bridge, barricaded for years.
Hemmed in on the west: that steep bank
and the hills that block the sunset.
Three times, they’ve tried to bring it back
entrepreneurs calling in architects, artists,
forming committees, renovating whole blocks,
then giving up; energy and money running out.

Go in morning’s snow-encrusted light.
Cross Arch Bridge over the river
and watch the water boiling below the dam
yellow-white and dangerous.
When you get to Main,
(rattle of the freight train passing near)
let zero cold sharpen your cheeks and mind.

Not many books in Books on Village Square.
The clothing store’s long gone
though at This and That
you might buy a mug with a kitten on it.
And the Good Buy’s aisles explode with the used
plastic pocketbooks, dusty pants and blouses.
You could stop into Mountain View Tattoo,
but don’t. Linger instead
before Coyote Moon, its windowful
of necklaces from Africa and China.
Too early for Smokin’ Joe Chili
or a beer at the Hula Cat,

but go to Miss Bellows Falls Diner
for a second breakfast of bagel and bacon.
The smell of grease and maple syrup’s in the air,
the shine of the street’s reflected
in the backwash of the grill,
and some hulk of a guy in a hunter’s vest
at the counter loudly reports
on last night’s town meeting.
When he leaves the place gets quiet.

Outside again. No one’s on the sidewalk.
Perhaps the cold keeps them in?
Or something else?
Then one old man comes from the north,
black overcoat, black stocking hat, tortoise shell cane
he taps on the walk like the Knock Code.
As he nears, he speaks, a low voice
as if you weren’t entirely meant to hear.
And you don’t, but you’re certain
he has some message you must know.

Life’s still here for sure—and history
even where the clock tower says too late, too late
and the abandoned paper mill stares at you
with its glassless eyes.
Where the ramshackle Victorian houses of the mill-rich
have become apartments, or rooming houses for the poor.
It’s in the fossils found on the river bank,
and how you’ll learn
that once, the Abenaki fished for salmon
in these ancient waters,
and how, beneath this street you’re walking on,
hot springs bubble and steam,
how the whole town rests on them. 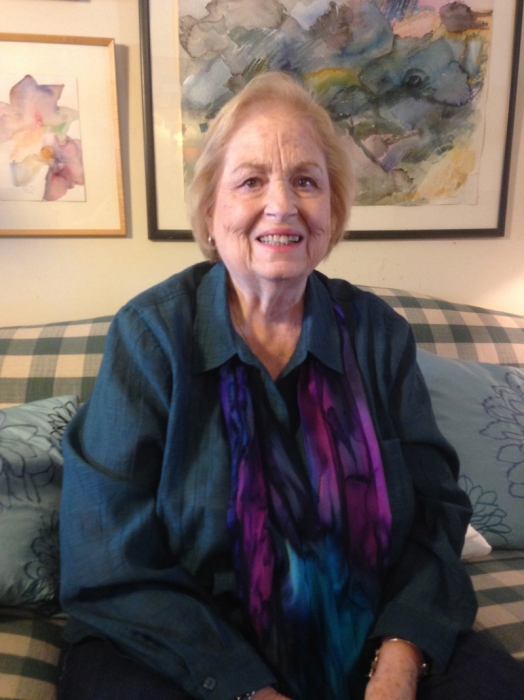 Patricia Fargnoli is the author of seven collections of poetry. Her latest book, Winter, was published by Hobblebush Book, September 2013. Her previous book, Then, Something, Tupelo Press, 2005 won the ForeWord Magazine Silver Poetry Book of the Year Award, co-won the New Hampshire Poetry Club’s Sheila Mooton Prize and was an Honorable Mention for the Erik Hoffer Awards, and a finalist for the New Hampshire Literary Awards.

Duties of the Spirit won the 2005 New Hampshire Jane Kenyon Literary Award for an Outstanding Book of Poetry. Her first book, Necessary Light (Utah State University Press, 1999), published when she was 62, was awarded the 1999 May Swenson Poetry Award judged by Mary Oliver. Her chapbook, Small Songs of Pain (Pecan Grove Press, 2003) is a collection of poems triggered by Chagall’s illustrations of LaFontaine’s fables. In addition she has published two other chapbooks.

Pat, who was the New Hampshire Poet Laureate from 2006-2009 is a retired clinical social worker has been the recipient of a Macdowell Colony fellowship and has been a frequent resident at the Dorset Writer’s Colony and Wellspring House.

A past Associate Editor of The Worcester Review, she has been on the residence faculty of The Frost Place Poetry Festival, and has taught in the Lifelong Learning program of Keene State College and privately. She’s been the recipient of an honorary BFA from The New Hampshire Institute of Arts, has won the Robert Frost Foundation Poetry Award, been a semi-finalist for the Glasgow Book Award and three times a semifinalist for The Discovery The Nation award.

A graduate of Chaffee, ’55, Trinity College, Hartford, Connecticut, The Hartford College for Women, and the UCONN School of Social Work, Pat has worked as a Research Analyst for the State Police, a YWCA program director with adolescents in trouble with the law, as an actuarial analyst and supervisor with Aetna Insurance Company, and most recently, for 10 years prior to her retirement, as a psychotherapist in family service agencies.

To learn more about Patricia and her work, please visit her website.