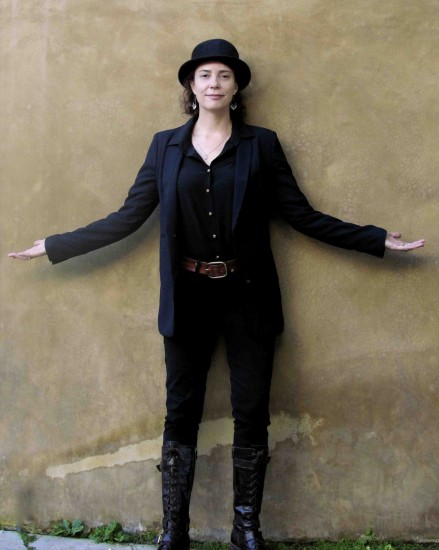 Michelle Bitting was a dancer and chef before devoting herself to poetry. Her collection, Good Friday Kiss, was chosen by Thomas Lux as the winner of the 2007 DeNovo Prize for 1st Book of Poetry.

Michelle lists Dylan Thomas, Sharon Olds, Tony Hoagland, Anne Sexton and Kevin Young as some of the writers who have influenced her most.

“I used to have to write at stoplights and in parking lots because my kids were small, and often, I was driving my son around to his therapies,” Bitting says in an interview with Pirene’s Fountain. “I would get up early, before the family was awake and write or force myself to stay up late. Fortunately, I have larger blocks of time with the kids in school a greater portion of the day. But there are still many scheduling challenges I’m hoping to work out, though for all I know it could get worse!” 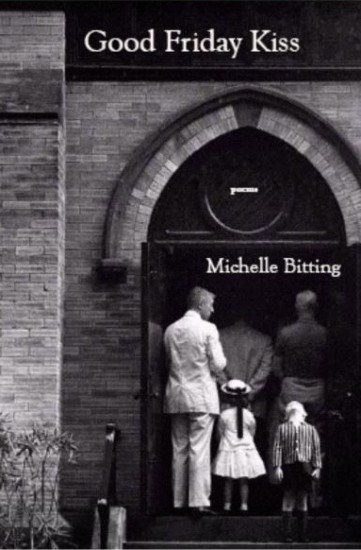 In the same interview, Oliver Lodge asked Bitting about writing and “the muse”:

“I do believe that cultivating poetic awareness in the world, becoming a really excellent listener and watcher, performing the daily push-ups of consciousness is vital and helps prepare the way for synchronicity and visitation. So you have to do the work it takes to stay in shape. And it’s a better way to live in the world anyway–very freeing, enlivening. As far as blocks go, you have to write through them, write badly for a while if necessary. It’s the only way to get to the good stuff.”

The two poems featured here, “Patti Smith” and “In Praise of My Brother, the Painter,” are included in Bitting’s latest collection, Notes to the Beloved. Writer Dorianne Laux says, “A powerful female voice, body, spirit and sensibility inhabits this book…Bitting is at her best here: unbridled, open, aware.”

If you’re in California, there are two upcoming opportunities to hear Michelle read.

At 7 p.m. on Monday, April 8th, she will be participating in a visual arts and poetry event at the UC Davis MIND Institute. The event is free. Click here for more information.

Michelle has also created a series of short “poem films,” which you can peruse on her website.

I want to give Gwarlingo Sunday Poem fans a head’s up…This week I leave for a month-long writing residency in Wyoming. On my way to Wyoming, I’ll be stopping at the Cleveland Institute of Art to give a talk to students on the creative process. Because I’ll be on the road, there will no Sunday Poem next weekend. My bookshelves are bulging with lots of new poetry publications, however, and there are some fabulous poets in the pipeline, so stay tuned.

Have a relaxing Sunday!

In Praise of My Brother, the Painter

How every morning he rose, slave
to the sound, this endless call to make.
Mad hatter, dervish sawyer, a primitive
blur of hands at work: fingers feeding
the dreamiest bolts through needles,
vision’s machinery. In the photo where
he stands, fists on hips—defiant, electric
in his Bowery studio, splotched jeans
and boots, the clouds of white gesso
a kind of palette couture—so satisfied
his look: Je suis arrive, Asshole...And
this is how I want to remember him.
Not what a note left like that means.
Not the slow descent, the pills or piles
of soiled laundry. Not the dog left barking
in the kitchen, the bowl with enough grain
to last. No, I want the beauty, even
his cursive, the swirling tints
of parting thought, the art itself: Dear Sister,
if I could survive this long, you will flourish.

(after the premiere of “Dream of Life”)

On the street outside The Aero Theatre,
two women puzzle
under the late summer stars,
dumbstruck in their Loreal lips
and pastel sweaters
by the unconventional allure
of the Godmother of Punk.
Where is the beauty,
they are wondering, about
her mannish mug,
the razor chin
and dingy teeth,
her unshaved pits,
the way she stomps around the stage
in heavy black boots,
her faded peace sign t-shirt
drenched with rock star sweat.
What is it about her,
blindfolded, arms raised,
clapping to the hellfire
heavens as the audience belts
the soaring refrain:
G-l-o-r-i-a… Glooooooria!
like some ecstatic shaman,
whiskers of white spittle
sprouting down her chin.
She’s spewing Rimbaud,
Ginsberg, Baudelaire,
a long silver cross
slung across her chest,
as the airborne audience
howls and stamps its collective feet,
the wings of her scraggly hair
flapping open and shut
around her urgent, transfixed face.
Singer or saint? Like me,
these ladies want to know,
as they fumble for their keys,
yakking away as cars buzz past
and the red marquee fizzles out.
They want to know
but there are no answers,
only the rush
of being baptized
for two cinematic hours
in the golden showers
of a factory girl from Jersey
who moved to New York City,
opened her cowboy mouth cave
and felt it ripen,
burst like a grape
in the cosmopolitan sun.
Don’t you wish you wrote
those wild, edgy songs,
trashed the Chelsea Hotel
with Sam Shepard,
CBGB’s and going platinum
only to take the money
and run to raise two kids
in the suburbs of Detroit?
In your fifties you re-emerge,
reinvent yourself,
rock ‘n rolling the world stage
from Seattle to Berlin.
And when you’re not
chanting for crowds,
inhaling a microphone
or fondling the pebbly contents
of an ancient Persian urn
filled with Mapplethorpe’s ashes,
you are tracking Blake’s ghost
through the cemeteries, parks,
and urinals of Paris,
every place his bony,
misunderstood ass
is known to have squatted
and scribbled something beautiful
while taking an ordinary,
everyday, entirely human piss. 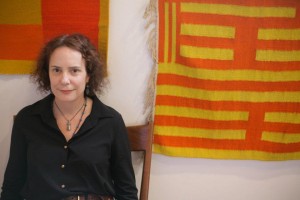 Michelle Bitting grew up in Los Angeles next to the Pacific Ocean. She studied and performed theater, dance and music before turning her full attention to creative writing. Her work is published or forthcoming in The American Poetry Review, Prairie Schooner, Narrative, Rattle, Nimrod, River Styx, Crab Orchard Review, diode, Linebreak, the L.A. Weekly and others. Poems have appeared on Poetry Daily and as the Weekly Feature on Verse Daily.

Thomas Lux chose her full-length manuscript, Good Friday Kiss, as the winner of the DeNovo First Book Award and C & R Press published it in 2008. Her book Notes to the Beloved, won the 2011 Sacramento Poetry Center Award and was published in 2012. Michelle has won the Beyond Baroque Foundation Award, the Virginia Brendemuehl Award and Glimmer Train Poetry Open. She has also been a finalist for the Poets & Writers California Exchange contest and Rona Jaffe Foundation Awards.

Michelle has taught poetry in the U.C.L.A. Extension Writer’s Program, at Twin Towers prison with a grant from Poets & Writers Magazine and is proud to be an active California Poet in the Schools. She holds an MFA in Poetry from Pacific University, Oregon and recently commenced work on a PhD in Mythological Studies at Pacifica Graduate Institute.

She lives in Los Angeles with her husband, actor Phil Abrams, and their two teenage children. You can learn more about Michelle by visiting her website. You can also connect with her on Facebook. 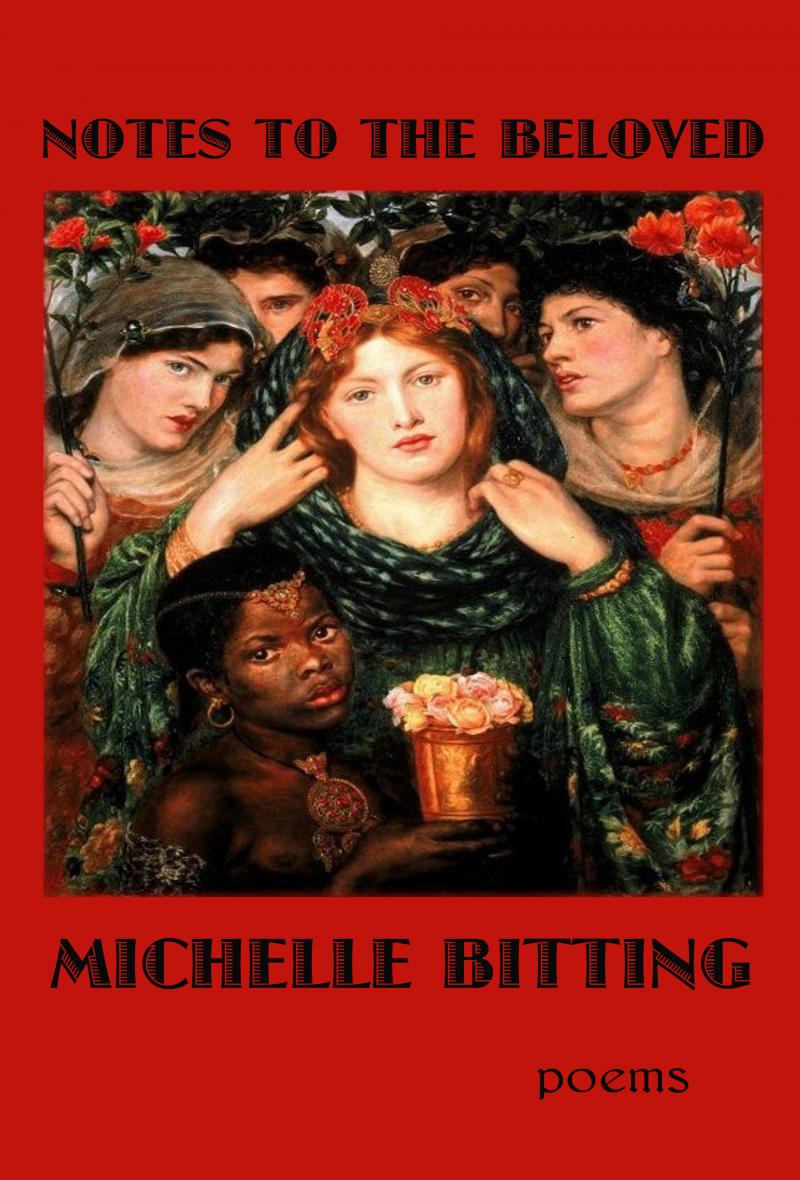 Thanks to all of the readers who have contributed to the Gwarlingo Membership Drive. Instead of selling out to advertisers, I’m “selling out” to my readers instead! 110+ Gwarlingo readers have contributed so far and $10,900 of the $15,000 goal has been raised. If you haven’t donated yet, you can check out my video and all of the member rewards, including some limited-edition artwork, here on the Gwarlingo site.

All poems © Michelle Bitting. All Rights Reserved. These poems appear in Notes to the Beloved (Sacramento Poetry Center Press, 2011) and were reprinted with permission from the author.