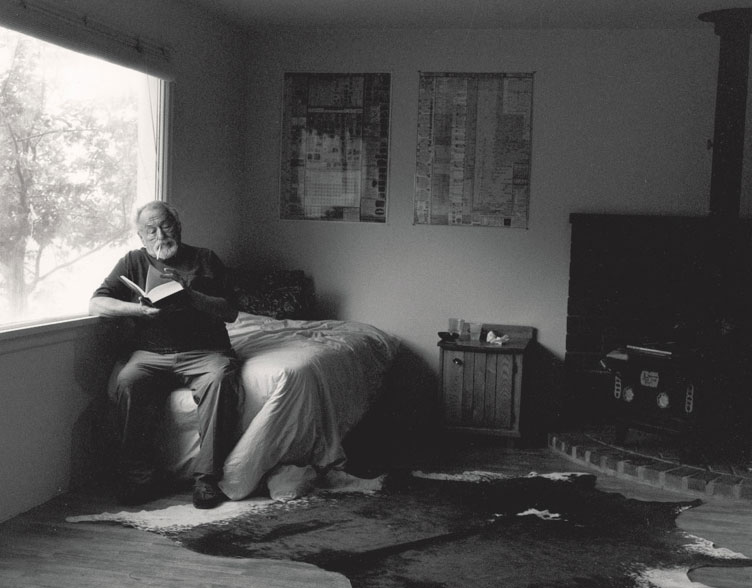 What a pleasure to have writer Jim Harrison re-launching Gwarlingo’s Sunday Poem series this weekend.

Harrison’s poetry, fiction, and essays pack a visceral punch. His writing is steeped in the senses, in nature, and the American landscape’s violent history of bloodshed. (If you haven’t read his 87-page masterpiece, Legends of the Fall, put it on your reading list).

Harrison has an uncanny ability to express the connections (and tensions) between past and present, nature and humans, the body and the mind, wildness and civilization (“The danger of civilization,” Harrison says, “is that you will piss away your life on nonsense”).  He is frequently compared to Hemingway, but largely because he hunts, fishes, and writes about the outdoors. Harrison’s writing is more empathetic and audacious (Faulkner may be a closer comparison).

Harrison’s voice is muscular, passionate, (and occasionally politically incorrect), but it is always authentic and compassionate. As readers, we have no doubt that we’re in the hands of a writer who embraces life in all its messy glory. Whether he is writing about a tiny insect, food, fishing, a Mexican gang lord, or a love affair, Harrison makes us feel every pang of passion, guilt, hunger, and sadness. 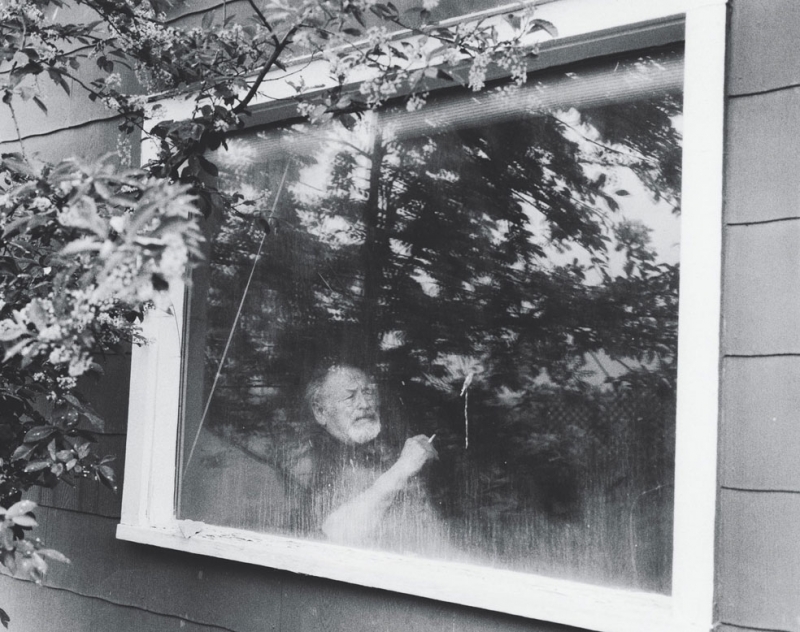 “Nature is slow,” Jim Harrison says. “That’s how I saw so much—because I was out there all the time.” (Photo by Kurt Markus via outsideonline.com)

He is particularly genius at imagining the lives of others, and not only human “others.” “To forget the self is to become one with ten thousand things,” Harrison once told Casey Walker in an interview. “You have to think of reality in terms as an aggregate of the perceptions of all creatures. You look at the bear but the bear is looking at you, and you better consider the bear looking at you. He isn’t something to just put a fucking collar on, you know?” 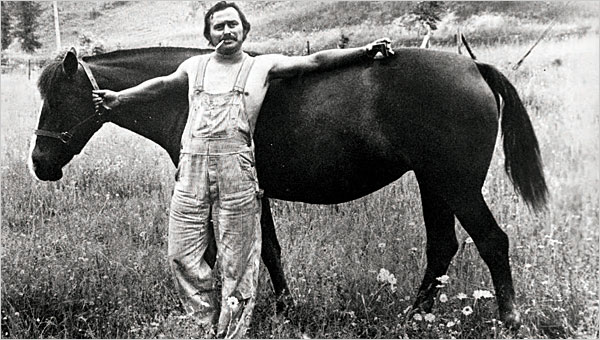 As you can see, Harrison is also very funny. He can ponder profound questions of life and death, but he relishes smaller conundrums too (Questions like where did all of the chicken thighs go?) “Chicken breasts are the moral equivalent of a TV commercial,” Harrison writes in “What Have We Done with the Thighs” from Just Before Dark: Collected Nonfiction.

Sex, food, and death are Jim Harrison’s holy trinity, but in his most recent poetry collection, Songs of Unreason, (which will soon be published in paperback by Copper Canyon Press), it is death and fragility that consume the author.

In the poem “A Part of My History,” the narrator takes a train from Seville to Granada to visit the mountainside where Frederico Garcia Lorca was murdered. (Harrison’s affection for Lorca’s writing runs deep.) He tries to stay in Lorca’s hotel room, but becomes frightened and moves. During the flight home, through Chicago, he becomes ill, thinks he is dying, and is taken to a hospital in an ambulance. After seven hours in ER, he returns home: “At dawn I flew to Montana and barely recognized our dog.” Harrison writes. “My advice is, do not try to inhabit another’s soul. You have your own.”

Songs of Unreason is a memorable mix of short lyrics, lively narratives, and interconnected suites. The collection’s longest piece, for which the book is named, is printed stanza-per-verso-page. Its short stanzas are woven throughout the collection and skillfully placed beside the longer narrative poems. (Four of the 67 stanzas of the poem are included below, along with four longer works.)

While Harrison may be best-known for his fiction and essays, poetry is a central passion.  In the Introduction to The Shape of the Journey (Copper Canyon Press, 1998), a collection drawn from his first eight books of poetry, he writes: “This book is the portion of my life that means the most to me….in poetry our motives are utterly similar to those who made cave paintings or petroglyphs, so that studying your own work of the past is to ruminate over artifacts, each one a signal, a remnant of a knot of perceptions that brings back to life who and what you were at that time, the past texture of what has to be termed as your ‘soul life.’”

I hope you enjoy these poems by Jim Harrison as much as I have. It’s good to be back. Have a relaxing Sunday. 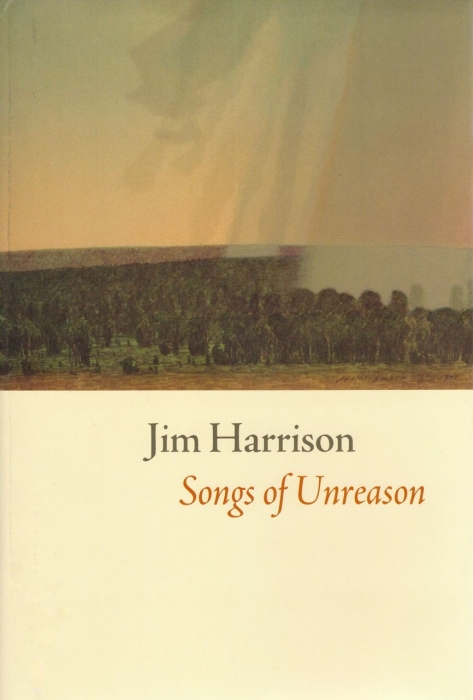 I am uniquely privileged to be alive
or so they say. I have asked others
who are unsure, especially the man with three
kids who’s being foreclosed next month.
One daughter says she isn’t leaving the farm,
they can pry her out with tractor
and chain. Mother needs heart surgery
but there is no insurance. A lifetime of cooking
with pork fat. My friend Sam has made
five hundred bucks in 40 years
of writing poetry. He has applied for 120
grants but so have 50,000 others. Sam keeps
strict track. The fact is he’s not very good.
Back to the girl on the farm. She’s been
keeping records of all the wildflowers
on the never-tilled land down the road,
a 40-acre clearing where they’ve bloomed
since the glaciers. She picks wild strawberries
with a young female bear who eats them. She’s being
taken from the eastern Upper Peninsula down
to Lansing where Dad has a job in a
bottling plant. She won’t survive the move.

I felt a little bad about the nasty earwig
that drowned in my nighttime glass of water,
lying prone at the bottom like a shipwrecked mariner.
There was guilt about the moth who died
when she showered with me, possibly a female.
They communicate through wing vibrations.
I was careful when sticking a letter
in our rural mailbox, waiting for a fly to escape,
not wanting her to be trapped there in the darkness.
Out here in the country many insects invade our lives
and many die in my nightcap, floating and deranged.
On the way to town to buy wine and a chicken
I stopped from 70 mph to pick up
a wounded dragonfly fluttering on the yellow line.
I’ve read that some insects live only for minutes,
as we do in our implacable geologic time.

The man eating lamb’s tongue salad
rarely thinks of the lamb.
The oral surgeon jerking twenty teeth out
in a day still makes marinara sauce.
The German sorting baby shoes at Treblinka
writes his wife and children frequently.
The woman loves her husband, drops two kids
at day care, makes passionate love
to an old boyfriend at the Best Western.
We are parts. What part are you now?
The shit of the world has to be taken
care of every day. You have to choose
your part after you take care of the shit.
I’ve chosen birds and fish, the creatures
whose logic I wish to learn and live.

I’m trying to create an option for all
these doors in life. You’re inside
or out, outside or in. Of late, doors
have failed us more than the two-party system
or marriages comprising only one person.
We’ve been fooled into thousands of dualisms
which the Buddha says is a bad idea.
Nature has portals rather than doors.
There are two vast cottonwoods near a creek
and when I walk between them I shiver.
Winding through my field of seventy-seven
large white pine stumps from about 1903
I take various paths depending on spirit.
The sky is a door never closed to us.
The sun and moon aren’t doorknobs.
Dersu Uzala slept outside for forty-five years.
When he finally moved inside he died.

From Songs of Unreason

When young I read that during the Philippine War
we shot six hundred Indians in a wide pit. It didn’t seem fair.
During my entire life I’ve been helpless
in this matter. I even dream about it.


I left this mangy little
three-legged bear two big fish
on a stump. He ate them at night
and at dawn slept like a god
leaning against the stump
in a chorus of birds.


The fly on the window is not a distant crow
in the sky. We’re forced into these decisions.
People are forever marrying the wrong people
and the children of the world suffer.
Their dreams hang in the skies out of reach. 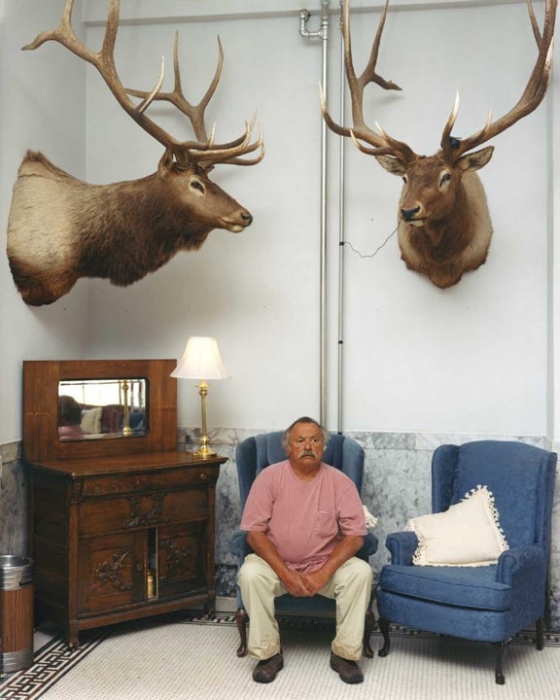 Jim Harrison has spent much of his life in Michigan on a farm near where he was born. His connection to rural landscapes is evident in his free-verse, imagistic poetry, which often explores human and animal drives set against an unforgiving natural world. Noting the poetry’s relation to Hemingway’s prose style in a review of Harrison’s Selected & New Poems 1961–1981, poet and critic Richard Tillinghast declared in the New York Times that “Mr. Harrison has few equals as a writer on outdoor life, the traditional heritage and proving ground of the American male.”

Educated at Michigan State University, Harrison taught briefly at SUNY Stony Brook. After the publication of his first collection of poetry, Plain Song (1965), he returned to Michigan, where he worked as a freelance journalist and laborer until he began to earn a living from his writing.

Harrison has published more than a dozen collections of poetry and has also built a reputation as a fiction writer, publishing numerous novels and collections. His book Legends of the Fall (1979), received considerable critical acclaim and was made into a 1995 feature film. Harrison has written several screenplays for Warner Bros. and other studios.

Harrison has been poetry editor of The Nation and co-editor of Sumac. He wrote a food column, “The Raw and the Cooked,” for Esquire magazine, and his collection of essays, Just Before Dark (1991), includes some of his food writing along with literary and nature essays.