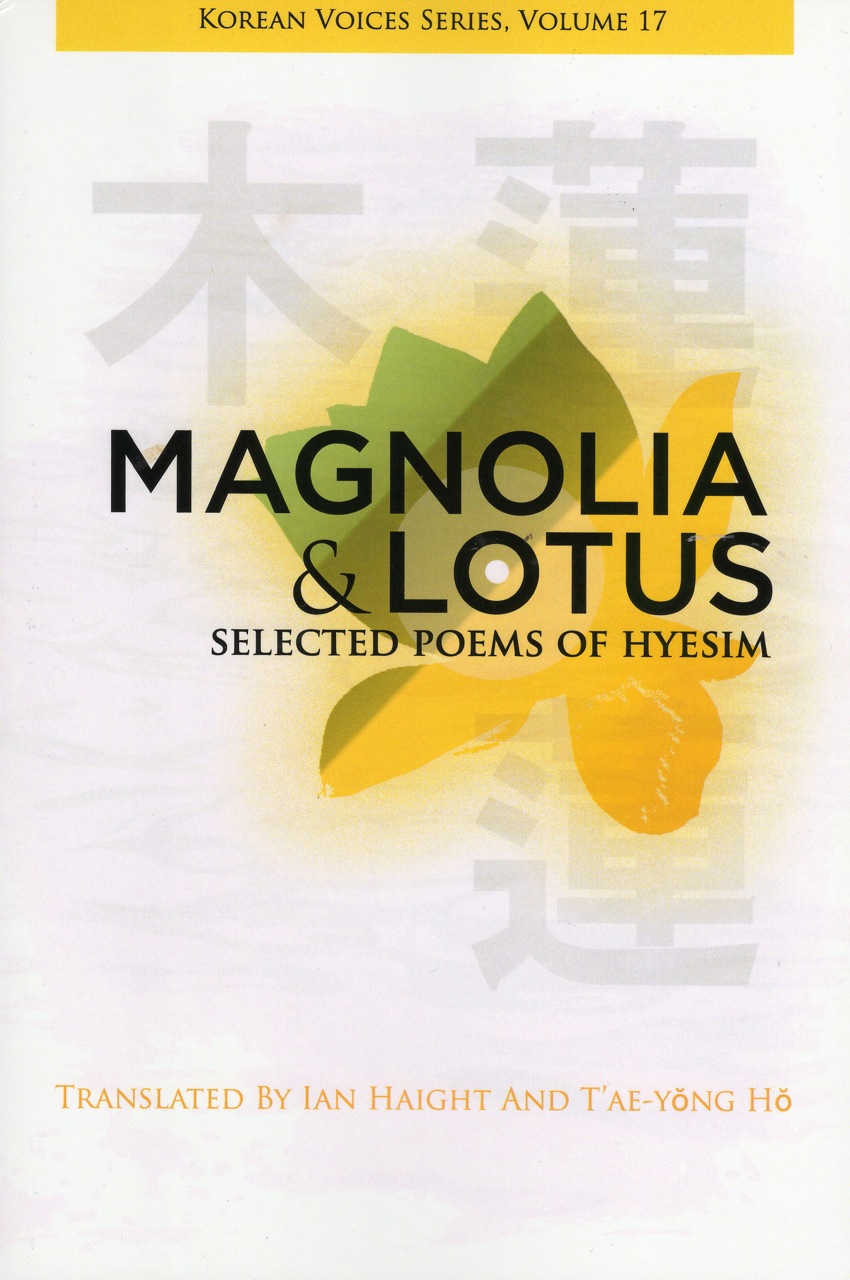 Chin’gak Kuksa Hyesim was the first Zen Master dedicated to poetry in Korea. As translator Ian Haight explains in his introduction to Magnolia and Lotus: Selected Poems of Hyesim (White Pine Press, 2012), the tradition of Zen Buddhist poetry begins with his writing.

Translating poetry by a revered monk of Korean antiquity has its challenges. Very little is known about Hyesim’s life as a recluse. We do know that he opted to study Confucianism and Buddhism over pursuing a career, which suggests that he came from a family of good social position. After only three years of studying under the influential monk Pojo Kusa Chinul, he was named a Master.

When Master Chinul died five years later in 1210, Hyesim was made Chief Abbot by Royal Order. He received the title Zen Master and Grand Zen Master from King Kojong, and was given a golden robe by the general of the king’s army, an honor bestowed on only the most highly respected monks.

Magnolia and Lotus is drawn from the only known book of Hyseim’s poetry, Poems by Muuija, a transcript kept in the archives of the University of Kumasawa in Japan. Translators Ian Haight and T’ae-Yong Ho worked from an original Chinese manuscript, also using Korean language scholarship and translations for reference and context.

The book is an important text in Korean letters. It is only the second collection of poetry by a Buddhist Master in Korea, and the poems, though often about Buddhism, are not only about this theme. Hyesim also writes about friendship, departure, and what it means to be Chief Abbot at a temple. “One can easily find a common thread of humanity throughout Hyesim’s writing,” explains Haight.

Here is the title poem from the collection…

Magnolia, the Lotus of Trees

“I like this poem for a number of reasons and, at the translator’s ever-present risk of presumption, believe it captures the voice of Hyesim,” says Haight.

There resides so much Buddhism in these four simple lines: the non-judgmental doubting of what is observed, and how shifting perspective reveals different possibilities in assumptions; the idea of the blossoms themselves—both lotus flowers and magnolias as representations of wisdom, beauty, truth, and enlightenment; the appreciative acceptance of not knowing what a flower is because its fixed form cannot be determined, and how this understanding could be applied to everything comprehended by the mind; finally, a penetrating recognition: that there is nothing to compare with the singularity of what is observed—everything under the sun has uniqueness. A train of thought that is simultaneously paradoxical and circular couched in deceptive simplicity—yes, this poem feels very Buddhist. The poems in this collection present a world observed with reverence and admiration by a monk who lived more than 700 years ago. It feels natural to identify the collection as a unified voice of Hyesim.

“Plantain” is one of my favorite poems in Magnolia & Lotus and is a good example of how Hyesim uses nature to contemplate the ideal. The simplicity of this poem avoids sentimentality in favor of expressing a deeper truth: that art can’t always improve upon reality. Certain things, such as plantains, are perfect just as they are.

In other pieces, the poet focuses on various objects. Hyesim believed that an individual who was free of illusion could perceive the beauty, truth, and the abstract qualities of an object through poems that prompted clarity and understanding.

Hyesim’s writing embraces paradox, as well—paradox ”between large and small, material reality and emptiness, nothingness and fullness, and existence and non-existence.”

His language also works on multiple levels. According to Haight, the description of “boiling tea,” to give one example, can also be seen as a metaphor for meditation.

“The poems in this book are built around an imagined life of Hyesim and his purpose for writing poems,” says Haight.

What did Hyesim experience in meditation? How did his wisdom grow with progressive enlightenment? What did he place importance on in life; as a monk; as an early founder of Korea’s largest Buddhist sect, the Chogye Order? If he eventually relinquished this position, what did he then do? What were his thoughts in his final years? Each of the translated poems, attentive to the nuances of Hyesim’s Buddhist and Confucian background as well as the landscape of Korea, posits the point of view of Hyesim, his voice, and his time. My hope is that this collection—utilizing metaphor, rhythmic language and imagery—invites a reader into relaxed companionship with Hyesim and his life.

Bridging the gap of time and culture can make it challenging to understand all of the layers of meaning contained in these short poems, and yet there is much to appreciate about the language, simplicity, and ideas in these works.

At the center of Hyesim’s poetry is the notion of awareness. Language, sound, nature, art, and the acknowledgement of life’s paradoxes can be aids to clarity and human consciousness. The Buddhist idea of letting go of attachments and seeing the world as it truly is is the central theme in Hyesim’s writing. “Their bedrock is thusness,” writes the poet Jane Hirshfield, “their images’ beauty is pellucid and new, their view without limit.” I agree with writer Chase Twichell: “there’s not a single opaque word in the book.” These poems “might have been written yesterday or tomorrow, and anywhere.”

Because the clearing of the mind was of central importance to Hyesim, it seems ridiculous to over-intellectualize or struggle too much with the cultural divide while reading. As Haight himself argues, out of respect for awareness, it is probably best to let these poems speak for themselves. 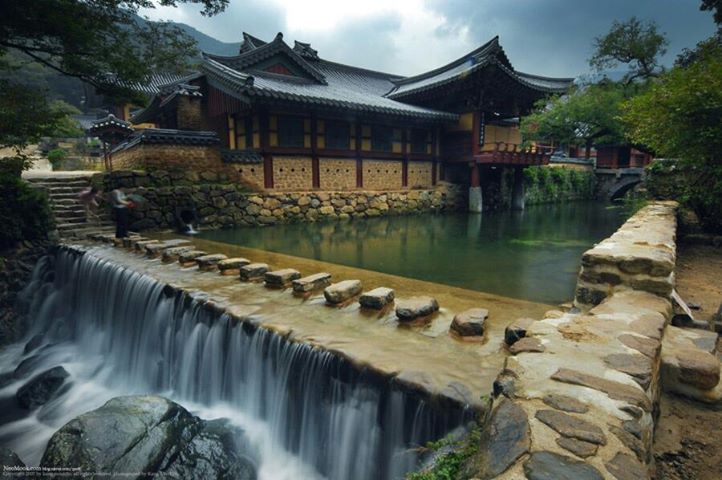 A plantain is an unlit
green candle of beeswax

the spread leaves, a vernal coat’s sleeves
desiring to dance.

is better
than my comparisons.

as there is no lake, my single moon
recedes from view.

Do not dismiss the moon tonight
just because you believe

it will set in the west, rise again tomorrow
in the east.

A year passes suddenly, swift as a river—
my hair grays with the solemnity of age every day.
Even this one body I do not possess—
let it be. What can I know beyond my mind?

Patiently Dreaming, a Buddhist Layman
Asks for a Poem About the Pasture Cow

Put to Pasture on a family’s field,
a cow watches other cows drink water.
Sometimes this cow tries to eat a little grass—
held by a nose ring, her head cannot move.

As days pass, the cow grows accustomed to this—
after years, the cow accepts it as natural
In an eternity, the cow never yearns for freedom—
how many years does it take to accept the habit of a yoke?

Listening to Rain in My Hermitage

Who enjoys galloping
a road in rain?

In my hermitage, I sit in comfort—
the weather need not be clear.

Once rain ends, I can begin
my lazy excursion—

calmly, I listen near the eaves
to falling water.

No wind, no rippling:
the surface, reflecting all, fills my eyes.
What need is there for so many words?
Observing one another is enough.

It has a node, distinct from ordinary grass—
in late autumn, the node matures, grows well-defined.
Solitary, content to be called a reed,
it does not need to be understood by people.

Wind, fragrant from the unfolding petals—
the stems glitter as sunlight brightens.
The flower thrives near rivers and lakes—
finding this blossom, one’s brow relaxes.

Sending Tea with an Answer to a Question

I sit long in meditation, tire in the overlong night—
considering boiling tea, I feel endless gratitude.
Clouds of confusion disappear after one cup—
snow blankets my bones. My ten thousand burdens end. 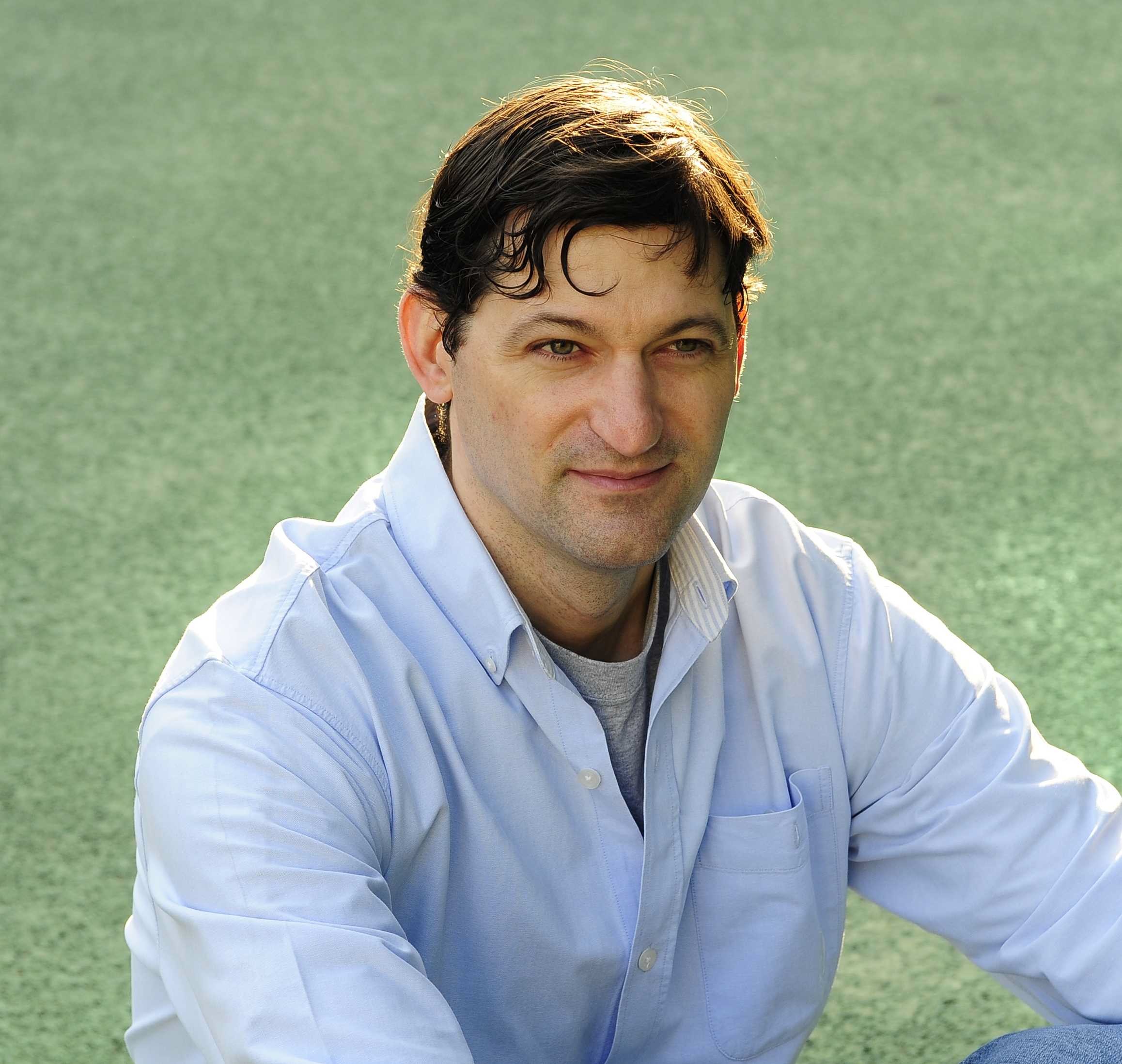 Ian Haight was a co-organizer and translator for the UN’s global poetry readings held annually in Pusan, Korea, from 2002-2004. He has been awarded five translation grants from the Daesan Foundation, Korea Literature Translation Institute, and Baroboin Buddhist Foundation for the translation, editing, promotion, and publication of Korean literature. Ian is the editor of Zen Questions and Answers from Korea (2010), and along with T’aeyong Ho, the translator of Borderland Roads: The Selected Poems of Ho Kyun (Korean Voices) both from White Pine Press. Ian’s translations, essays, poems, and interviews have appeared in Prairie Schooner, Writer’s Chronicle, Quarterly West and Hyundae Buddhist News, among many other publications. For more information, please visit his website. 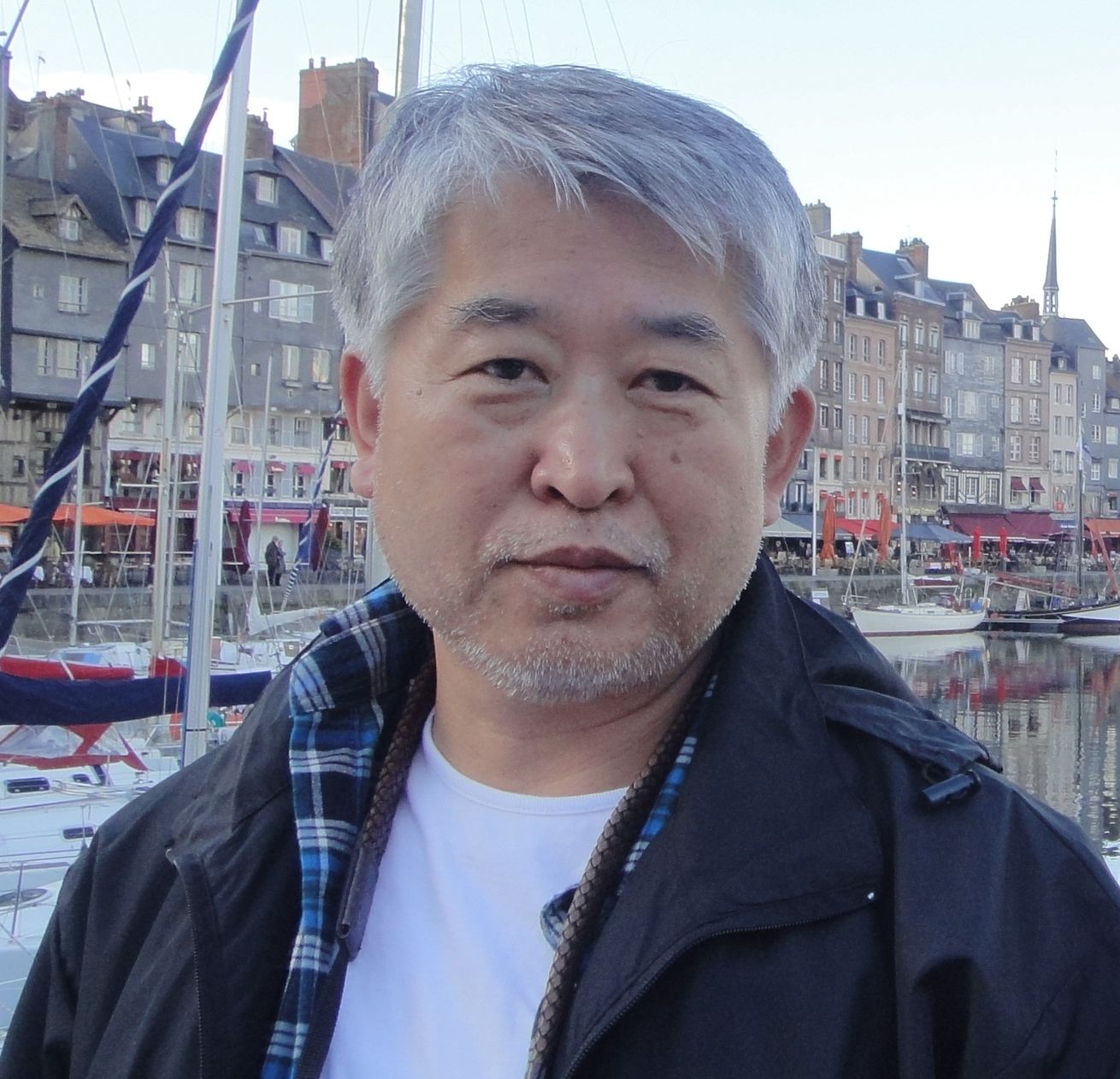 T’ae-yong Ho has been awarded translation grants from the Daesan Foundation and Korea Literature Translation Institute. With Ian Haight, he is the co-translator of Borderland Roads: Selected Poems of Hŏ Kyun and Magnolia and Lotus: Selected Poems of Hyesim. Working from the original classical Chinese, T’ae-yong’s translations of Korean poetry have appeared in Runes, New Orleans Review, and the Atlanta Review.

Thanks to all of the readers who have contributed to the Gwarlingo Membership Drive. Instead of selling out to advertisers, I’m “selling out” to my readers instead! 132+ Gwarlingo readers have contributed so far and $12,200 of the $15,000 goal has been raised. If you haven’t donated yet, you can check out my video and all of the member rewards, including some limited-edition artwork, here on the Gwarlingo site.

All translations © Ian Haight and T’ae-yong Ho. All Rights Reserved. These poems appear in Magnolia & Lotus (White Pine Press, 2012) and were reprinted with permission from the authors and White Pine Press.