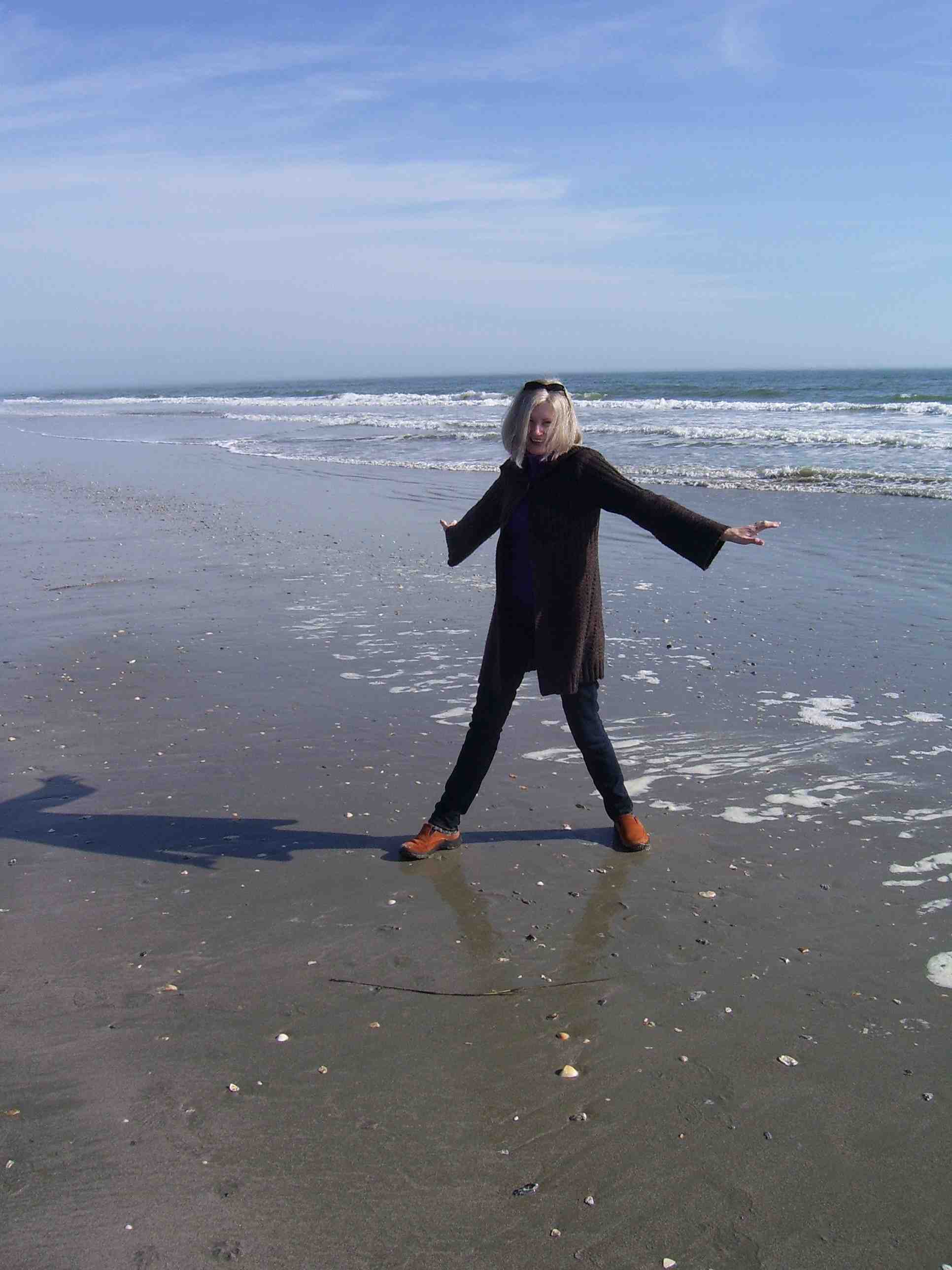 The poems in Beth Copeland’s Transcendental Telemarketer evoke a range of emotions and places. They’re colorful and playful, but also rich in meaning.

Copeland writes about the Atomic Bomb Museum in Nagasaki, Hokusai’s “great wave,” and Japanese typhoons, but also Buddhist scrolls, Christian morals, and Afghanistan. Her poem “Russian Dolls” is cleverly shaped just like Russian nesting dolls, with long sentences stacked upon short ones, and the stanzas growing ever bottom-heavy. There is Southern musicality in her voice, as well as a sly sense of humor.

Copeland now lives in North Carolina, but she has lived all over the world. “Multicultural influences are reflected in the artistic vision of my work,” Copeland writes. “As a child I lived in Japan, India, and the United States, and my poems incorporate themes and sensibilities of both the East and the West, as well as an exile’s longing for a homeland. My poems…serve as maps through the past and into the future, and document my journey through landscapes both familiar and foreign, visible and invisible, literal and metaphorical.”

Best of all, Copeland’s poetry is continually surprising. It is refreshing to see the poem “My Life as a Slut” next to works about atomic war, motherhood, childhood whippings, and a clever piece title “Zin Zen” about soaking in a hot bath with a glass of zinfandel. I say “refreshing” because these poems are very real and never use humor or multicultural influence as mere window dressing. Copeland opts for range and diversity of style, tone, and theme over a single-minded poetic voice. While reading Transcendental Telemarketer , we sense that we’re witnessing many different facets of a rich, complex life.

But Copeland never takes things too serious. Her intelligent humor is evident in poems like “Boolean Operators: Marriage”…

“With names linked by AND the search ends:
Sun and moon, his and hers, wife and husband…

The search expands with yours OR mine.
Mars or Venus misaligned.

Refine the search to exclude all others.
Spouses, NOT lovers…”

Today, I have four poems from Copeland’s Transcendental Telemarketer to share with you. Enjoy your Sunday! 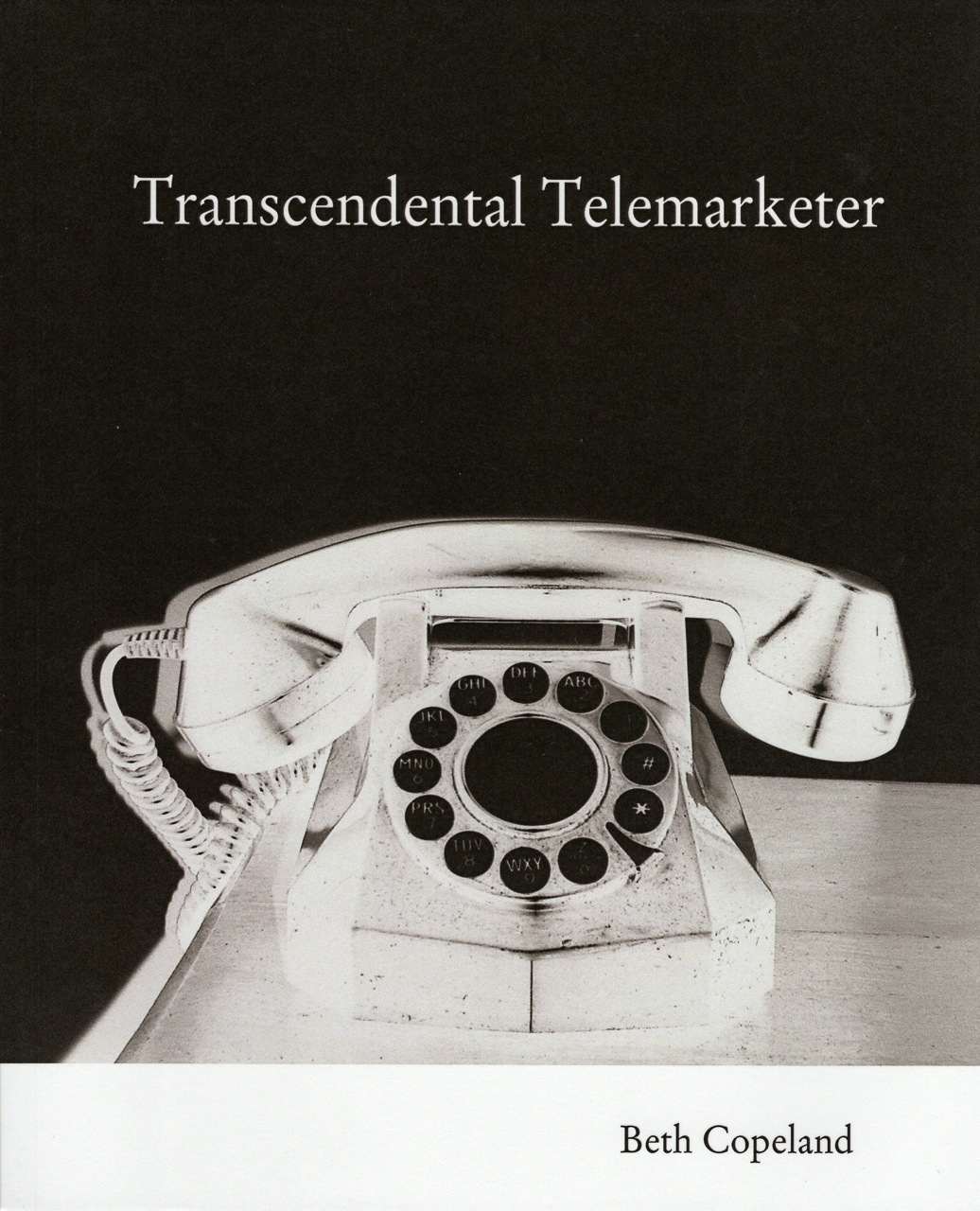 It was like catching a cold.
If he coughed without covering his mouth,
if he sneezed, you could have his baby,
or so I believed

at the age of nine when I read the chapter
on reproduction in a medical text. I knew the facts
of life had nothing to do with storks and bees,
but I couldn’t figure out the mechanics

of sex, that tab A had to be inserted
into slot B like the cardboard figures cut
from the Rice Krispies box that always fell
apart when I tried to put them together.

Conception was a kind of weather
or photosynthesis: as leaves absorb sunlight
and turn green, I thought a man’s floating spores
could penetrate a woman’s pores,

that they could be on opposite sides of the room
just looking at each other or looking out the window.
One could be reading the newspaper and the other
playing Heart and Soul on the piano

when, WHAM, BAM, sperm and egg collide
and nine months later she becomes a mother.
I thought the microscopic sperm
could pass like germs from unwashed hands

contaminate a door knob, spoon or drinking glass,
or as Casper
floated through brick walls
on Saturday morning cartoons, believing

a wife could receive her husband’s seed
like milkweed sown from the pod,
that every birth was a miracle, a gift from God,
that all you need is love.

I stole another woman’s only scarf—
No, I didn’t. I stole the line above to lead to the next
line, swiped like the challis scarf

lost in a church parking lot.
It was black with a blue-and-white geometric print
like tiny Turkish tiles.

One Sunday I looked up from prayer
and an old woman in the pew in front me
was wearing my scarf!

Because it had been given to me
by someone I loved, I couldn’t let it pass,
so after church, I said, “You’re wearing

my scarf,” and she said, “Someone found it
and said it looked like mine,” adding insult to injury
since I didn’t think my beautiful scarf

looked like it would belong to
a woman wearing Hush Puppy shoes and a Brillo-pad
hairdo. “But it’s not yours,” I said.

“It’s mine,” so she took it off,
handing it over as if she were giving me a gift
when the scarf had been mine to begin with.

I still wear it, especially
on cold mornings when I need to wrap something warm
and familiar around my neck.

That happened many years ago
when I still went to church and still believed
I was lost and needed God to find me.

Like Tara, Tibetan mother of all buddhas, born
from Avalokiteshvara’s teardrop, with a third eye

Frida Kahlo’s witchy black eyebrows,
with stigmata-like peepholes in her palms and soles,

“You’re not sick,” they scold, waving airport-scanning-wand
hands over cool, unbeaded brows. “Get out of bed.

You didn’t finish your homework, did you?
That’s the real reason you don’t want to go to school.”

sneaking in past curfew, with hawk eyes that stalk
skulking culprits like eerie eyes in museum portraits

that are always watching you no matter what
covert corner of the room you move to;

to search the night sky for his lost children.
By the time the eye returned, Ra had grown another eyeball

in its socket, so he stuck the wandering eye in the center
of his forehead where it rules the universe as the Sun.

“Paradise is exactly where you are right now … only much, much better.”
—Laurie Anderson

We slept for hours, waking whenever we felt like it,
baking bread in the morning, kneading dough into loaves,

sharing the ritual of coffee and the newspaper,
drinking wine the color of sunlight

as we soaked in the hot tub under a dome of stars.

We tried to identify lizards and birds—the green anole
with its watermelon-colored dewlap puffing in and out,

the indigo bunting hovering at the feeder with turquoise wings
that are really black, but in paradise we see what we want to see

through the feathers of belief
where black is blue, the color of bliss, not grief. 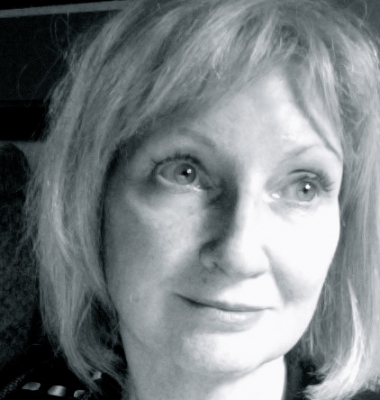 Her first book Traveling through Glass received the 1999 Bright Hill Press Poetry book Award. Two of her poems have been nominated for a Pushcart Prize. Copeland is an English instructor at Methodist University in Fayetteville. She lives with her husband Phil Rech in a log cabin in Gibson, North Carolina.

For more information about Beth and her writing, please visit her website.

All poems © Beth Copeland. All Rights Reserved. These poems appear in Transcendental Telemarketer (BlazeVOX books, 2012) and were reprinted with permission from the author.