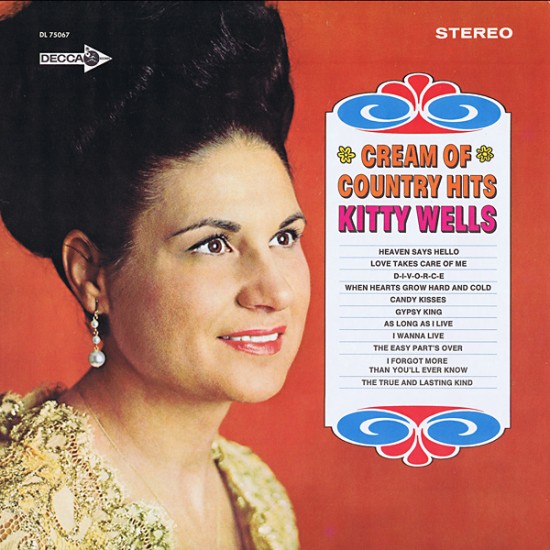 Country music legend Kitty Wells died Monday at her home in Madison, Tennessee, after suffering complications from a stroke. She was 92.

The music of Kitty Wells and other country artists played frequently on the turntable in our Georgia house. My grandmother, who grew up on a farm in the North Georgia mountains as one of twelve children, was raised on the sounds of Mother Maybelle and The Carter Family. Music was an integral part of the church services she attended, and my grandmother (who is still living) always loved to belt out hymns on Sunday mornings in an off-key whine reminiscent of both Mother Maybelle and Wells. When I hear the gospel-tinged moan of Kitty Wells today, it still feels like home to me. 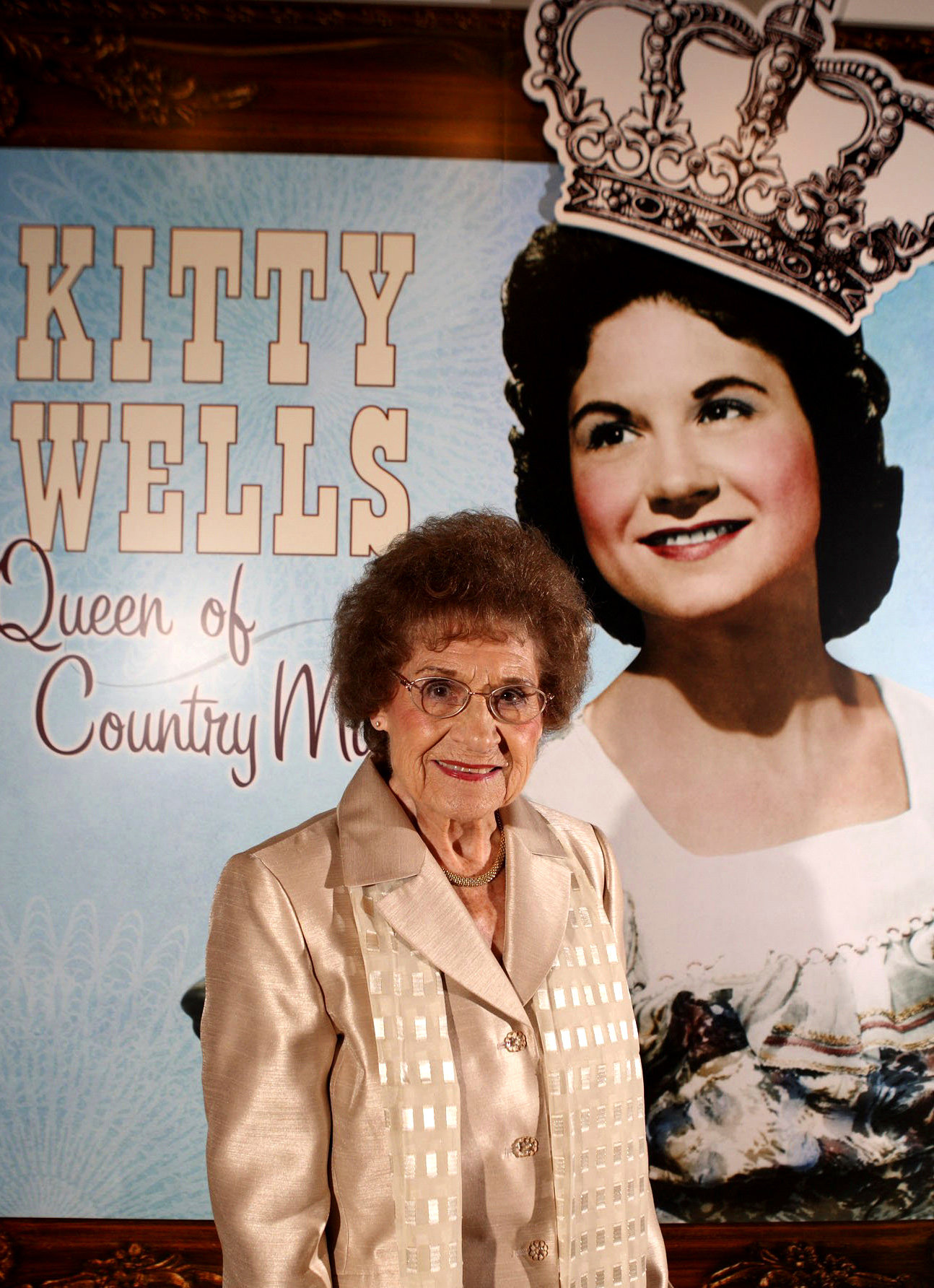 Without Wells, it’s possible that a young Loretta Webb born into poverty in Butcher Hollow, Kentucky, and married at the ripe age of 15, never would have found the courage to teach herself to play a $17 Harmony Guitar or to write songs like “Coal Miner’s Daughter,” “The Pill,” “One’s on the Way,” or “Rated X.”  (Photo courtesy the Associated Press)

From where we sit today, it’s easy to forget how important Wells was to country music. Before Mother Maybelle and Kitty Wells, country music was very much a man’s world. Singers like Hank Williams, Merle Haggard, George Jones, Hank Thompson, and Ernest Tubb emerged from a conservative, working class life obsessed with both sin and salvation. There was poverty, drinking, hard living, followed by the usual Sunday morning repentance. The female characters who inhabit these country music songs were often portrayed as either “angels” or “whores.”

Take Hank Thompson’s number one hit “The Wild Side of Life” (see video below), which tells the story of a woman shirking her domestic duties in pursuit of a wild, night life. “Wild Side” co-writer William Warren based the song on a young woman he once met — a honky tonk angel, as it were — who “found the glitter of the gay night life too hard to resist.” In his book The Grand Ole Opry History of Country Music Paul Kingsbury writes that the song appealed to people who “thought the world was going to hell and that faithless women deserved a good deal of the blame.”

Until Mother Maybelle and Kitty Wells, the female perspective was notably absent from commercial country music. One has to look to Appalachian, Scotch-Irish, and New England folk tunes to find female singers and writers “telling it like it is.” (One of my favorite examples is this Vermont folk tune “Single Again,” which was collected and recorded by legendary song catcher Margaret MacArthur and recently re-recorded by Margaret MacArthur’s granddaughter Robin and her husband Tyler Gibbons.) 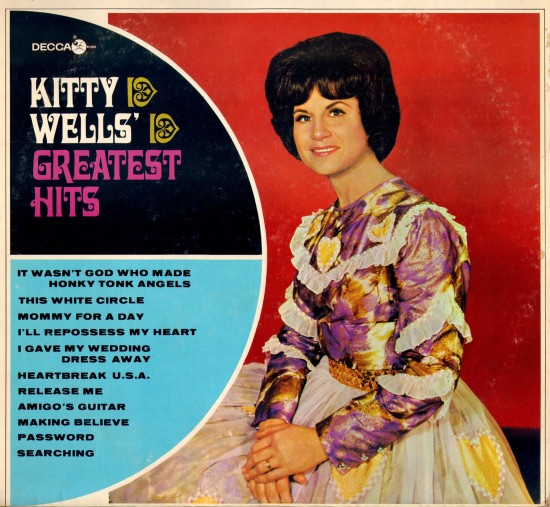 Kitty Wells’ “It Wasn’t God Who Made Honky Tonk Angels” was the perfect comeback song to Hank Thompson’s “Wild Side.” It should be noted that the tune wasn’t written by Wells herself, but by J.D. “Jay” Miller, but it was Wells who made it a success. It became the first number one Billboard country hit for a solo female artist, which was in and of itself, a major breakthrough. Here is Bill Friskics-Warren writing in The New York Times:

Ms. Wells was an unlikely and unassuming pioneer. When she recorded “It Wasn’t God Who Made Honky Tonk Angels,” she was a 33-year-old wife and mother intending to retire from the business to devote herself to her family full time. The only reason she made the record, she told the weekly newspaper Nashville Scene in 1999, was to collect the union-scale wage ($125) that the session would bring.

“I wasn’t expecting it to make a hit,” she said. “I just thought it was another song.”

But Ms. Wells’s record proved to be much more than just “another song.” It was a rejoinder to Hank Thompson’s No. 1 hit “Wild Side of Life,” a brooding lament in which the singer blames a woman he picks up in a bar for breaking up his marriage, and it became her signature song.

“Honky Tonk Angels” resonated with women who had been outraged by Mr. Thompson’s record, which called into question their morals and their increasing social and sexual freedom. At a time when divorce rates were rising and sexual mores changing in postwar America, the song, with lyrics by J. D. Miller, resounded like a protofeminist anthem.

“As I sit here tonight, the jukebox playin’/The tune about the wild side of life,” Ms. Wells sings, she reflects on married men pretending to be single and causing “many a good girl to go wrong.” She continues:

It’s not true that only you men feel the same

From the start most every heart that’s ever broken

Was because there always was a man to blame.

The NBC radio network banned Ms. Wells’s record, deeming it “suggestive,” and officials at the Grand Ole Opry would not at first let her perform it on their show. The Opry eventually relented, in part because of the song’s popularity and Ms. Wells’s nonthreatening image. 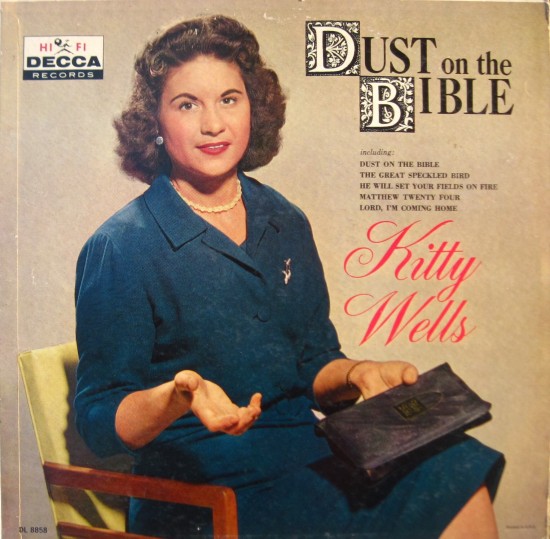 It was the remarkable Kitty Wells who paved the way for singers like Loretta Lynn, Dolly Parton, Patsy Cline, and Tammy Wynette, whose popular songs defied the typical stereotype of being submissive to men and putting up with their philandering ways.

Without Wells, it’s possible that a young Loretta Webb, born into poverty in Butcher Hollow, Kentucky, and married at the ripe age of 15, never would have found the courage to teach herself to play a $17 Harmony Guitar or to write songs like “Coal Miner’s Daughter,” “The Pill,” “One’s on the Way,” or “Rated X.” Like Wells, the conservative country music community was slow to embrace Loretta Lynn’s frank songs about sexuality, and often refused to play them on the radio, but both Lynn and Wells found widespread commercial success — a testament to the fact that their voices were appreciated by listeners, if not by the male dominated music business.

Here’s Kitty Wells performing her #1 hit at the Grand Ole Opry. I love this video for the way it captures commercial country music at this moment in history. Everything about the set, band, and television production plays it safe — it’s conservative, white, and non-threatening. The real innovation here is Kitty Wells herself, the woman who voiced an alternative point of view and made it possible for the groundbreaking female voices that followed in her footsteps.

(Note: If you’re reading this article in an email, please click here to watch the videos.)