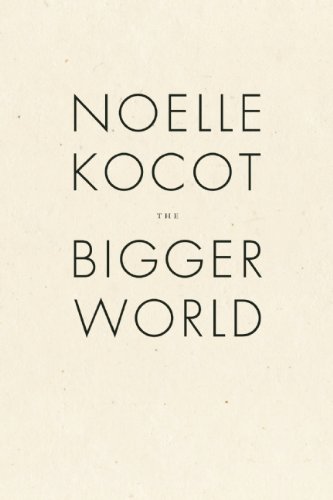 Noelle Kocot’s latest book of poetry, The Bigger World, is a collection of  character sketches. Told in a straightforward, surreal style—one that recalls folktales, ancient myths, and fairytales—Kocot has stripped each piece down to its essentials. These short, accessible poems are funny, moving, and sometimes absurd, but always entertaining.

“I wrote these poems in fifty days,” Noelle explained in an interview with the Rumpus Poetry Book Club. “It was a grueling process, because I had stopped writing at that point about my husband’s death. It was a purifying experience, in which I was psychologically processing a whole lot of stuff, and letting a whole lot go.”

The original working title was Gnomon, after a concept in James Joyce’s Dubliners, where people were incomplete, like a missing piece of a shape in geometry. “I titled it The Bigger World because it was an exit from Sunny Wednesday, my previous book, which concerned my husband Damon’s death. Frankly, I needed to get out into the bigger world myself, so it is a hope, an expectation.”

Noelle says that she is always writing poetry, “consciously or not, 24/7,” but that her first love is music. “I started out playing musical instruments, listening to all kinds of music, and then I married a great composer/pianist, and had access to so much great music.” Sonic Youth, Xenakis, Beethoven, Debussy, and Coltrane are some of her favorites. “I love music. It flows DIRECTLY into the affective sense. Poetry does not.”

When the Rumpus Poetry Book Club asked her to share some advice for young writers, Noelle offered this guidance:

“Keep writing no matter what. Never let ANYONE push you down. I went to a VIOLENT graduate program, but instead of getting discouraged, I wrote more, and I threw it in their faces. Write out of spite. Write out of love. Just keep going, and don’t let this world system take you down. Get your reading in young, because you are going to be busier as you get older and not have enough time to read. Live without worrying about money—skim the bottom. It’s the best way to be a writer.”

Here are two of my favorite poems from The Bigger World—“Fugue” and “Marie.” Thanks to Wave Books, Matthew Zapruder, and Noelle Kocot for sharing these poems with Gwarlingo. Enjoy your weekend!

A flash of sudden joy
From the solar plexus
Where fear usually resides,
She knew she’d be okay.
“There is no other life
Apart from this one,” she
Said to no one in particular.
The building gleamed
In the midday rain.  The cats
Ate their turkey dinner.  She
Screened phone call after
Phone call.  A wild loneliness
Descended like a flock of
Robins drained of their red.
Nothing seemed to matter
Anymore, not the past with
Its ax of granite nor the future
With its watery punctuation,
But the moment, yes the moment,
She was forced into it like
So much dough between
The fingers.  “God bless us all,”
She said aloud to everyone and no one.
There is no other life.

She was the one who noticed
The first forsythias bursting
From their sacs outside her house.
Her brown curls were thinner
Than in the pictures
Taken just a few months before
Beside the horses in the shows,
The moss-grown houses
Of her ancestors, the rising
Shoots of their tombstones.
They talked about her chemo,
The nights she spends throwing up
While her husband sleeps
In front of the T.V.
She assures Donna he means well
When he gathers pamphlet
Upon pamphlet on the myths
Of nausea that tell how the sickness
From the treatments can be eased.
She shows Donna more photographs,
This time of her youngest son’s wedding.
The baby is coming in July.
In the pictures it is a small snowdrift
Under his wife’s white dress.
At the end of their talk,
An old deacon comes to the door.
The week before, he gave her
A statue of St. Patrick.  She
Can tell by the chips in the saint’s
Green robe that it is a family heirloom.
She wants to give it back.
But no, he won’t take it.
He has come to give her Communion,
Which she takes daily now.
So Donna tells her they’ll see each other
Again and she smiles.
Fifty years old, kids gone,
Cradling stiff laughter in her arms,
She smiles at her, as if to say,
A mother of death is still a mother. 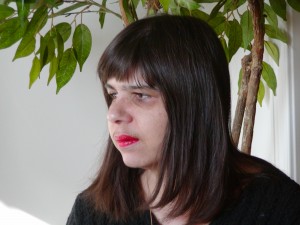 Noelle Kocot is the author of five books of poetry, most recently, Poem for the End of Time and Other Poems (Wave Books, 2006), Sunny Wednesday (Wave, 2009) and The Bigger World (Wave, 2011). Kocot has also translated a book of poems by the French poet Tristan Corbiere, Poet by Default (Wave, 2011).  She is the recipient of numerous awards, including those from The Academy of American Poets, The National Endowment for the Arts, The American Poetry Review and The Fund for Poetry.  Born and raised in Brooklyn, she now lives in New Jersey and teaches writing in New York.

“Fugue” and  “Marie” appear in The Bigger World. Copyright © 2011 Noelle Kocot. Used by permission of Wave Books. All rights reserved.