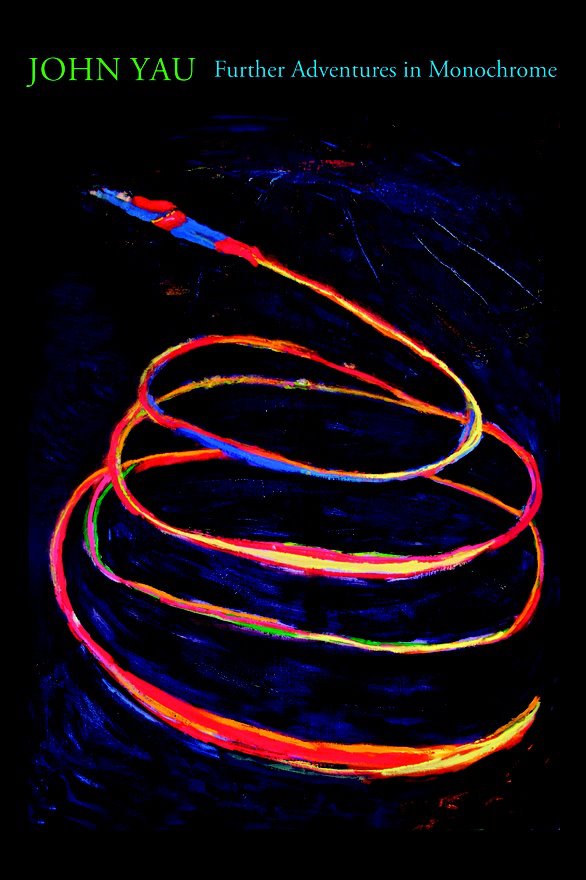 Poet, art critic, and curator John Yau was born in Lynn, Massachusetts to Chinese emigrants. Like a painter obsessed with the physicality of paint, Yau takes pleasure in words as words. His poetry is playful, surprising, and pushes the limits of language. “I do not speculate about ceaseless wonders,” Yau writes. “I go out and see if I might/ Find another remote and insubstantial form.”

Yau is also a noted art critic and curator, who has published many works of art criticism. His passion for visual art permeates his latest poetry collection Further Adventures in Monochrome. Yau not only creates a poetic dialogue with artists like John Cage, Yves Klein, and Andy Warhol, but he also employs a collage technique in his poetry, much like the Surrealists and Pop Artists.

Though Yau is using words to convey his vision, his poetry is both visual and aural. It’s this interplay between language, sound, and image that allows Yau’s poetry to be both deep and mischievous. Further Adventures in Monochrome is multidimensional in every sense of the term. Reading a poem by John Yau is not unlike the process of looking at a sculpture in a gallery—the work is best appreciated when approached from different directions: above, below, in the round.

The Poetry Foundation writes, Yau “has won acclaim for his poetry’s attentiveness to visual culture and linguistic surface. In poems that frequently pun, trope, and play with the English language, Yau offers complicated, sometimes competing versions of the legacy of his dual heritages—as Chinese, American, poet, and artist.”

One of my favorite poems in Yau’s new collection is the title poem, “Further Adventures in Monochrome.” The fifteen-part poem investigates the life, art, and ideas of French artist Yves Klein, sometimes in the voice of the artist himself. What follows is an excerpt from “Further Adventures in Monochrome”—three sections of the poem that beautifully capture John Yau’s startling imagination. 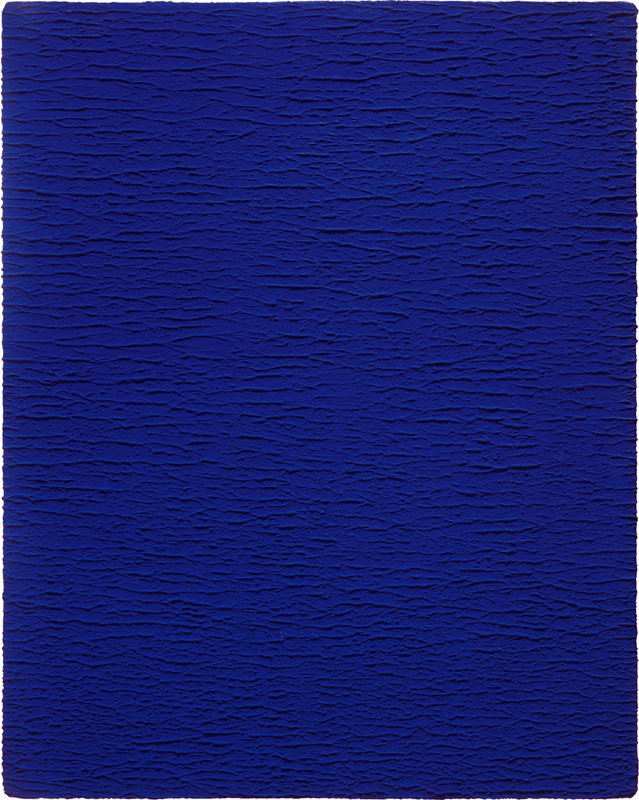 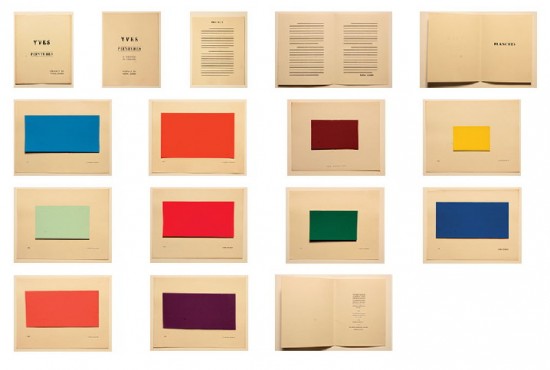 from Further Adventures in Monochrome

Everything exists to end up in a book, Stephane Mallarme

Nothing exists except in a book, which is the imagination, Yves Klein

In 1954, with the help of my aunt, I published two books, Yves
Peintures and Haguenault Peintures. They documented the paintings
I wanted to preserve in the impossible, the only domain we should
long for. The preface for each book was made of thick black lines,
rather than words, which links the books to Mallarme: An insinuation
simple        in the silence. The purported author of the prefaces was Claude
Pascal (or Pascal Claude). His name links him to the philosopher
who wrote: “Contradiction is not a sign of falsity, nor the lack of
contradiction a sign of truth.” It is said that you can’t have it both
ways, but they are wrong. The infinite sky shows us this with every sun
shower.

Each book has ten tipped-in color plates. In Yves Peintures, each plate is
signed “Yves” and the name of a city in the lower right hand corner.
It might be where I made these paintings made of colored paper.
Isn’t that what happens to a painting when it is put in a book?
It becomes a piece of colored paper. So why not show that?

Each tipped-in plate is a piece of colored paper pointing to a
monochromatic painting that never existed, except in the mind’s eye.
(Isn’t this the only eye with which one sees?)

To make love is to be neither abstract nor literal.

To argue over whether the paintings existed or not is to miss the point.
It is like arguing over how many angels can dance on the head of a
pin when everyone knows that infinity is not a number, but a feeling,
at once overwhelming and elusive, impossible to grasp and equally
impossible to avoid.  Just try sitting alone in a bath for an hour with no
one in the next room.

Walt Whitman embraced multitudes and sang the body electric. But to
embrace infinity knowing that it will embrace you (and that it begins
to do so long before you arrived in this quadrant) is the song I want
to sing—its single note followed by a silence of equal length, a silence
that, as John Cage whispered, can never be silent.

That the paintings did not exist should have sent you
on the road to the impossible.
Where would you turn if you could not see them?
I wanted you to see what could not be seen,
to glimpse that fact, to be touched by something small and vast,
and know that you are somewhere between them,
moving in both directions at the same time.

What I wanted from art was impossible. It is what every artist wants. If
you settle for the possible, then your failure is ordinary, although, in a
few cases, spectacular.  I didn’t want what was there for the taking, the
images of things that could be named. I didn’t want to add names to
the vocabulary.

I rejected the ordinary and the extraordinary, because those are rungs
one learns how to climb. I do not need a ladder to reach the sky.

I rejected all of the tried and true ways because I wanted to attain
a state that exceeded the dimensions by which we are bound to the
earth. “Never anyone but you,” the poet wrote, “despite stars and
loneliness. Despite the trees mutilated at nightfall. Never anyone but
you will follow her path, which is mine. The further you go the bigger
your shadow gets.” In a place where there are no shadows because
there are no bodies, I wanted my shadow to embrace me; I wanted to
dissolve in it its cold, sweet embrace. I wanted to dwell in the everlasting
impossible. This is why I am a realist, which is different from being a
New Realist. I am not a New Realist, but a timeless one, Why? Because
I believe in miracles.  Therefore it should not come as a surprise that
I do not consider myself an artist of the avant-garde. Anyone can be
toilet trained. Look around you, and you will see that nearly everyone
is toilet trained. Only artists who are toilet trained can have their work
in a museum. Having work in a museum is not why I became an
artist. I became an artist because I wanted what art couldn’t give me: I
wanted to be immersed in what I could not experience: The impossible. 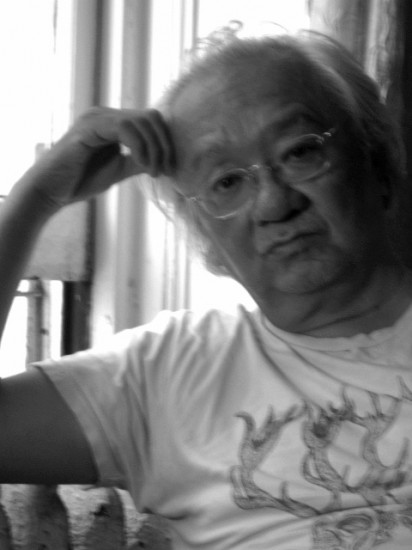 John Yau has published more than two-dozen books of poetry, fiction, and criticism. Recent publications include Further Adventures in Monochrome (2012), Nicholas Krushenick: A Survey (2011),  A Thing Among Things: The Art of Jasper Johns (2009), and The Passionate Spectator: Essays on Art and Poetry (2006). In 1999, he started Black Square Editions, a small press devoted to poetry, fiction, essays, and translation. The recipient of fellowships from National Endowment for the Arts fellowship, Ingram-Merrill Foundation, New York Foundation of the Arts and the John Simon Guggenheim Foundation, he teaches in the Visual Arts program at Mason Gross School of the Arts (Rutgers University). He was the arts editor for the The Brooklyn Rail (2006 -2011), but left to start the online magazine Hyperallergic Weekend Edition with three other writers. He and his family live in New York.

You can read other poems by John Yau online at Mascara Review, Narrative Magazine, and Connotation Press. 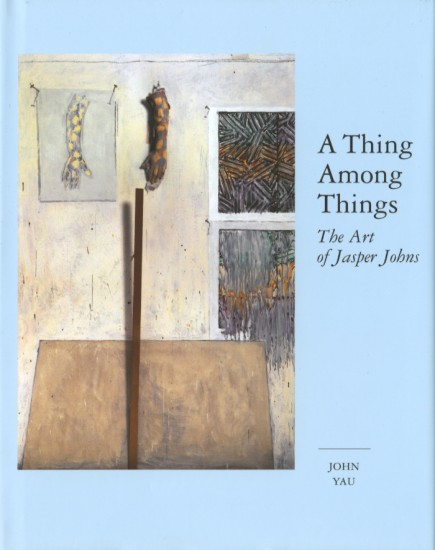