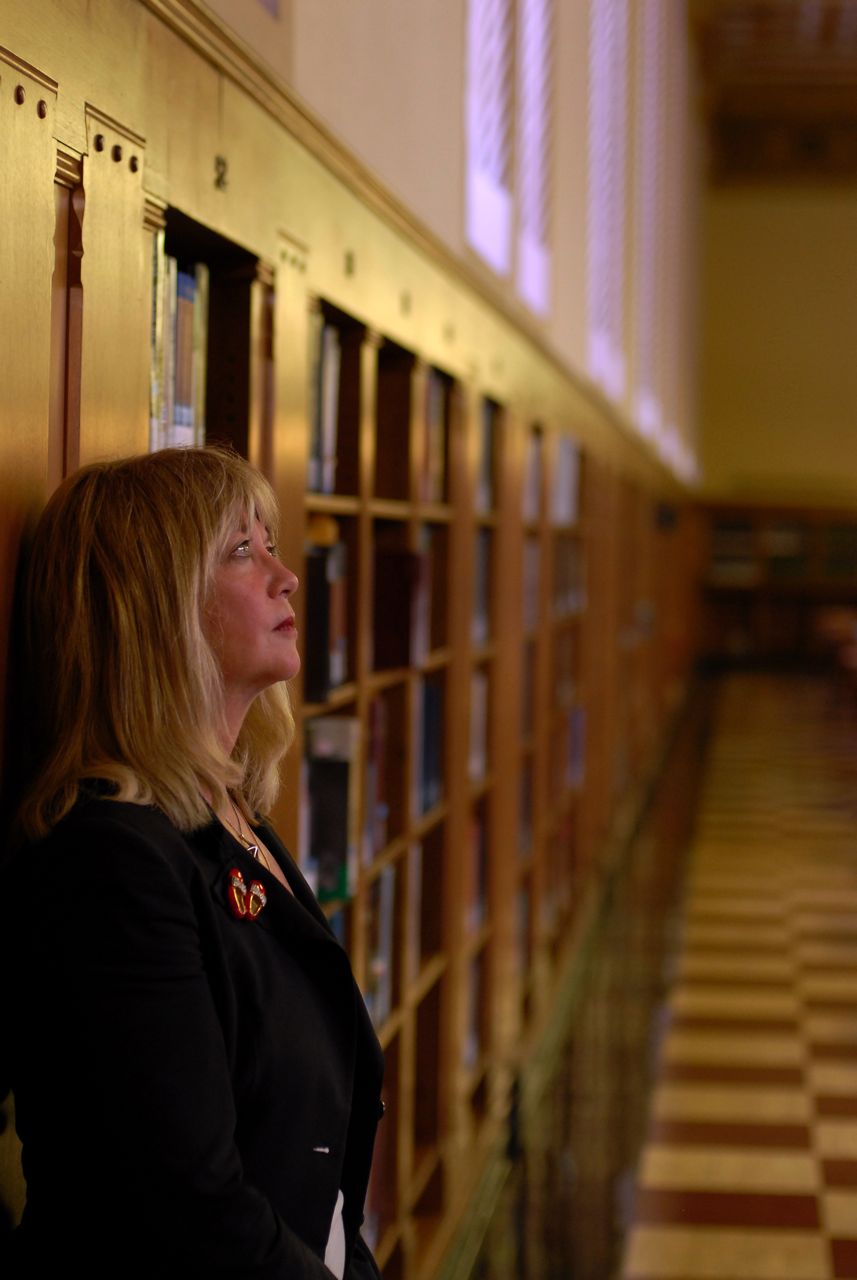 Gangsta language – A is for Apple, only.

Dreamy I-Pod lullaby, off-key. Next up: 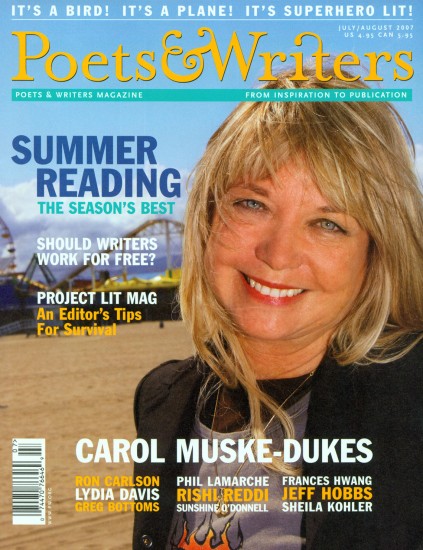 Carol Muske-Dukes is a professor at the University of Southern California and a former Poet Laureate of California. She is also a co-editor of two anthologies and an author of eight books of poetry, four novels, and two essay collections.

Known for her sharp portraiture and strong imagery, Muske-Dukes drew on her own experiences teaching in a women’s prison for the bestselling Channeling Mark Twain (Random House, 2008); in 1972, she created Free Space, a creative writing program at the Women’s House of Detention on Riker’s Island. Her other novels are Life After Death (Random House, 2001), Saving St. Germ (Penguin, 1993) and Dear Digby (Viking, 1989). 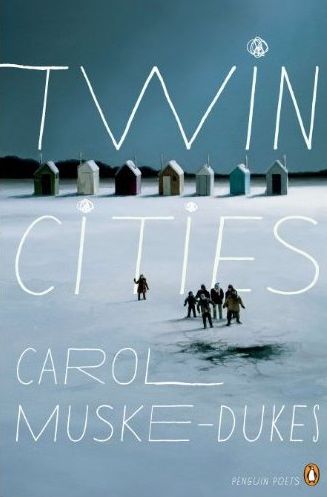 Carol’s 2002 collection of essays entitled Married to the Icepick Killer, A Poet in Hollywood, which humorously and insightfully describes her encounters with Hollywood following her marriage to the actor David Coleman Dukes, is comprised of essays and reviews from the New York Times Book Review, the New York Times Magazine, and essays from the Los Angeles Times Book Review, where she was poetry columnist for years. Her collection of reviews and critical essays, Women and Poetry: Truth, Autobiography and the Shape of the Self was published in the “Poets on Poetry” series of the University of Michigan Press, 1997.

Many of her collections have been “New York Times Most Notable Books” or listed in the current year’s “Best Books.”

She has been a critic for the New York Times Book Review and the LA Times Book Review, and now writes a regular column for the Huffington Post. Her work appears everywhere from the The New Yorker and Slate, to The Paris Review and L.A. Magazine, and she is anthologized widely, including in Best American Poems, 100 Great Poems by Women, two anniversary issues of Best American Poetry, 2012, and many others. 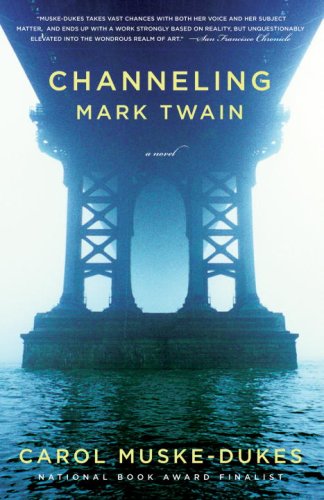 A careful writer who balances rhetorical precision with a unique manner of relating personal experience, Muske-Dukes has discovered, in the words of one critic, how to “reach past anecdote.” Essayist Duane Ackerson noted of Muske-Dukes’ verse that, “while well-anchored in daily life,

[it] moves far beyond to become a meditation on philosophical concerns like the nature of time and the value of life. This carefully achieved scope contributes much of what is powerful and persuasive in her work.”

Muske-Dukes published her first story at age eleven and began writing poetry at an even earlier age. “But I was fairly unconscious about the power of words and what it meant to have the power to use them until I came to New York in 1971,” she explained to Contemporary Authors. After becoming involved in several writing workshops, including Free Space, she “began to hear the dialogue between craft and sentiment, form and feeling.” Still she considers herself to be primarily a visual poet: “images come…easily to me, imagistic phrases litter my poems. I feel very close to painters, our processes are similar.” 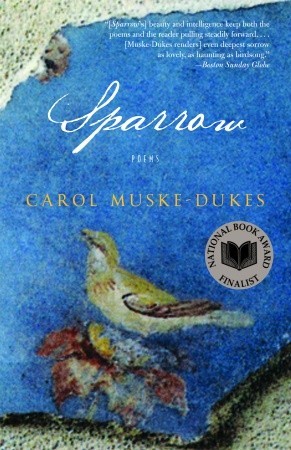 The difference between “seeing” and “hearing” her writing is one of the distinctions Muske-Dukes finds between her poetry and her prose. “The problem for me is ‘hearing’ what I write—that’s why it was so refreshing for me to write [my first novel]. I found a voice, I trusted it, I let it speak. Beyond time and how time happens in a poem or a story, the relationship between eye and ear forms the difference for me between poetry and prose. In prose, the reader listens, the reader is being told a story, she hears, then sees—in poems, the reader sees aurally, the eye and ear become one.”

With the same precision that she composes her poetry, Muske-Dukes extracts real meaning from the images created by the words in each of her novels, and her wide variety of subjects demonstrate her broad learning and interests. “As many writers have said before me,” she told Contemporary Authors, “I didn’t choose my subjects, they chose me. I was ‘given’ a set of themes early in life and they’ve obsessed me and continue to do so.”

Muske-Dukes is professor of English and Creative Writing and founding Director of the PhD Program in Literature and Creative Writing at the University of Southern California. She has also taught in the MFA programs at Columbia, UVA, UC Irvine, and the Iowa Writers Workshop. She also works with the teen literacy project  GET LIT: Words Ignite. She has received many awards and honors, including a Guggenheim fellowship, a National Endowment for the Arts fellowship, a 2012 Barnes & Noble Writer for Writers award, an Ingram-Merrill, the Witter Bynner award from the Library of Congress, the Castagnola award from the Poetry Society of America and several Pushcart Prizes.

Her daughter Annie holds an advanced degree in molecular biology and works as a research scientist. On November 13, 2008, Governor Schwarzenegger appointed Carol as California’s Poet Laureate.

To learn more about Carol Muske-Dukes and her work, please visit her website. You can also connect with her on Facebook. 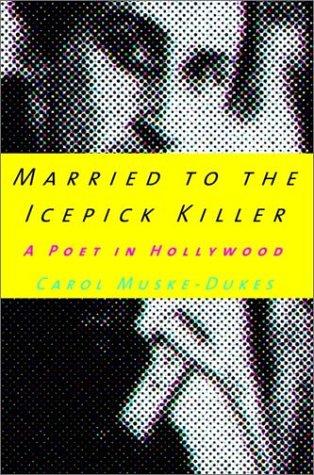 This poem originally appeared in Plume, an online poetry journal. Edited by Daniel Lawless, Plume is publishing work by some of the finest contemporary poets writing today. You can sign up for the Plume newsletter here or follow Plume on Facebook. Thanks to Carol Muske-Dukes and Daniel Lawless for permission to reprint this poem.

“Home-Boys: Baby & Me (a Sapphic)” appears in Twin Cities published by Penguin. Copyright © 2011 Carol Muske-Dukes. Used by permission of the author. All rights reserved. Biography courtesy Carol Muske-Dukes and The Poetry Foundation.