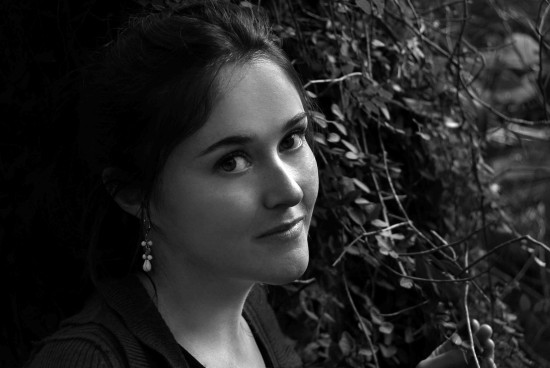 Rhyme is tricky business for a contemporary poet. In an environment where free-verse dominates, how can a writer make a traditional technique like rhyme meaningful and innovative, and not simply a hollow, reactionary gesture against the status-quo?

Poet Caitlin Doyle has been exploring this question through highly original poems steeped both in meaning and musicality. Whether she is constructing in free verse or in more traditional forms, Doyle’s surprising creations use “sound as a doorway to sense.”

Caitlin explained her views on rhyme and meter in a recent email exchange:

It’s not uncommon to encounter the rhyme-is-dead edict, the argument that rhyme is out of tune with contemporary ears. But how do you explain the fact that, looking back on years of jumbled history lessons, the clearest piece of knowledge that rises to my mind is this: In 1492, Columbus sailed the ocean blue? How do you explain the fact that children still chant ring around the rosy, pocket full of posies at recess? Or that no one in my family can drop an Alka-Seltzer into water without singing plop, plop, fizz, fizz, oh what a relief it is? Rhyme has long infiltrated every aspect of human discourse, from how we teach the young (an apple a day keeps the doctor away) to how we sell ideas, products, and even politicians to one another (Tippecanoe and Tyler, too).

In the beginning was the rhyme, both at the inception of human life when pre-literate people used rhyme to pass on oral history and at the start of our own individual lives; lullabies, nursery rhymes, jump-rope songs, commercial jingles. I have spent the past several years writing my way forward to get back to that beginning, the sustaining sonic pleasure of the first time I encountered Robert Louis Stevenson questioning the wind: O you that are so strong and cold, / O blower, are young or old? / Are you a beast of field and tree, / or just a stronger child than me?

Doyle’s poetry hovers in this surprising place between music and meaning. She is always aware of the larger effect of her poems, but no small detail escapes her notice. Her ability to balance content and form, humor and seriousness, seems effortless.

“For me, the ideal reader is a person who apprehends a poem’s meaning primarily through its music,” says Doyle. “I often imagine this reader as likely to be somebody who had stirring experiences with language in childhood and adolescence, who connected with the hypnotic pull of words as a young person long before learning to approach poetry with an eye toward dissection. Essentially, my ideal reader is an individual who, somewhere along the way, learned to experience language as a form of enchantment beyond full analysis.” 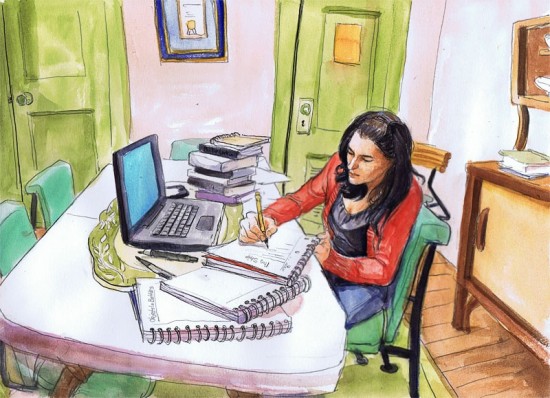 A drawing of Caitlin Doyle by artist Thomas Thorspecken

Doyle’s poems are serious and complex, but also witty and playful, and it’s this tension that makes her writing so innovative. Although she is skilled at using rhyme, meter, and the traditional formal elements of English-language poetry, she also has a facility for free verse and can’t be categorized as a strict “formalist.”

Most poetry lovers, myself included, aren’t much interested in polemical debates about the moral or political implications of choosing one stylistic approach over another. People who relish poems want to read work that compels their ears, minds, and hearts, and they don’t tend to believe that a single aesthetic mode is intrinsically superior in achieving those ends. When it comes to infusing a poem with aural resonance, rhyme and meter don’t possess greater or lesser power than alliteration, skillful modulation of line-lengths, assonance, or any other tools a poet might use.

The poems included here are a wonderful introduction to Caitlin Doyle’s unique voice. I hesitate to use the word “gothic” to describe Doyle’s style, and yet that is the word that kept arising while reading a selection of her work. Although she is a poet and not a fiction writer, she shares Flannery O’Connor and Faulkner’s Southern-gothic flair for unsettling (sometimes comic) domestic scenes. The Brontë sisters, Isak Dinesen’s tales, and Christina Rossetti’s “Goblin Market” also spring to mind, for in Doyle’s modern-day rhymes, there are most certainly goblins lurking in the forest and madwomen hiding in the attic.

While she has been published widely in journals and received a number of prestigious fellowships, Doyle has not yet published her first book. Let’s hope we won’t have to wait too much longer for a Caitlin Doyle collection to appear in print.

I wanted to be one of his props, a thing
that made the sound of other things – an umbrella
pushed open and closed: birds’ wings.
A coconut shell, one half
in each of his hands – galloping,
galloping. I set up his microphone stands
and he made the crackle of fire
with a ball of cellophane,
poured salt on a tinfoil sheet for rain.
The sound of skin on skin – two pieces of paper he slid
against each other. I wanted to be the words
on the paper. I wanted to be what I heard
in the mixing studio as I layered and looped
his tracks. I play them back:
my body the strip of steel he shook for thunder,
the feather he held to the spinning bike wheel
for a hummingbird’s hum, the fine-toothed comb
on which he plucked the crickets’ song. The real
sound isn’t always the best,
he said, when I asked why not go outside
and record the wind – and when I held
the microphone to my chest what it amplified was less
like a heartbeat than the one he made
when he wrapped
the microphone in felt and gently tapped
it against a bass drum, again and again.

The stone dolls, excavated from a tomb,
are eyeless, armless, heavy for a child

to hold. Not like the dolls that lined the room
my sister and I shared, their bodies light

and bendable, their eyelids mobile, hair
so real it tangled with our own at night.

And while we were asleep they came to life.
We never pressed our cheeks to death like girls

who played with stone dolls did. The doctor’s knife
could not have caught my sister more off-guard

or left me less alone; I had my dolls.
Though, soon, they lay on tables in the yard

with price tags. Even then they looked alive,
survivors with no sickness to survive.

The Breakfast in Heidelberg Series

I. Breakfast in Heidelberg

There are as many years in you as witches in a coven,
devil’s dozen, number of steps to the noose, no use
to rub a rabbit’s foot or knock on wood,
you’ve had one too many birthdays than you should

twelve years they served Chedorlaomer        and the thirteenth they rebelled

so you learned to read from the book your father
held before the fire but the thirteenth psalm proved him a liar
and in your heart you said the multiplication tables
must go higher        and then you began to bleed. Old dress filling with new need!

There are as many years in you as petals on a black-eyed sue,
seats at the last supper, spades in a deck;   no sense to hang
a cross around your neck or throw salt over your shoulder.
Your mother stiffens when you hold her.
Your mother pulls away and you remain on the steps
of the school. She won’t come again before the fall
begins to turn; it may be too late then for all but snow and nests below the leaves
and trees whose shaking is uncontrollable

Always heard, your mother invisible
as you turn and climb the steps or learn that an eclipse
is the moon across the sun or discover that your age is divisible by none
or put your clothing on before the mirror.        Never nearer
as you turn        or discern a face        ever clearer, 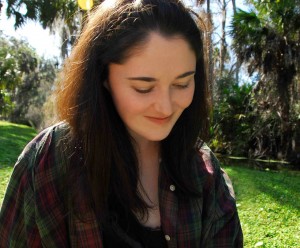 Caitlin Doyle’s poems have appeared in several publications, including The Atlantic, The Threepenny Review, Best New Poets 2009, The Boston Review, Black Warrior Review, The Warwick Review, and Measure. She has been awarded residency fellowships in poetry from the MacDowell Colony, the Ucross Foundation, the Jentel Foundation, the Edward Albee Foundation, the Vermont Studio Center, and others. Caitlin received her MFA in Poetry from Boston University, where she held the George Starbuck Fellowship in Poetry.

Caitlin has taught poetry as the Writer-In-Residence at St. Albans School in Washington, DC, served as the Jack Kerouac Writer-In-Residence at the Kerouac House in Orlando, FL, and taught as a Lecturer in Creative Writing at Boston University. She currently teaches Creative Writing as the Emerging Writer Resident at Penn State University, Altoona.

Of recent note, Caitlin has received an Amy Award in Poetry through Poets & Writers Magazine, a Tennessee Williams Scholarship in Poetry for the Sewanee Writers’ Conference, multiple Pushcart Prize nominations, and an Artist Grant through the Elizabeth George Foundation.

To read more about Caitlin and see additional samples of her work, you can visit her website. You can watch a video of Caitlin reading her poetry at Poetryvlog.com. You can also read Marissa Bell Taffoli’s interview with Caitlin on the Words With Writers website.

Check out all of Gwarlingo Sunday Poets in the new Sunday Poem Index.

Looking for the perfect gift? The Gwarlingo bookstore has an assortment of book titles on my personal recommendation list, including poetry, fiction, art and photography books, and more. A portion of your purchases benefit Gwarlingo.

All poems © Caitlin Doyle. All Rights Reserved. These poems were published with permission from the author.