On Money, Fear, and the Artist

On Money, Fear, and the Artist 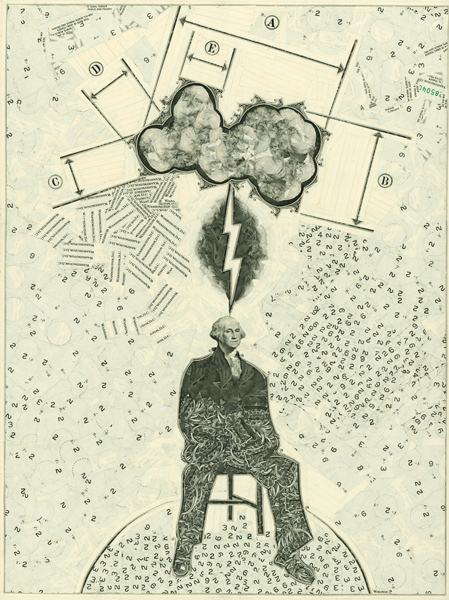 An Artist Gets Audited

A visual artist I know once told me about an audit she endured with the IRS. My friend is a professional artist in New York City with her own studio. Her work is shown at galleries and museums. She has received grants, been accepted to artist residencies around the world, and every now and then, she even manages to sell a few pieces of artwork.

During the audit, one of the IRS employees explained to my friend that she couldn’t keep declaring a loss for her business year after year. “This looks more like a hobby than a profession,” the auditor said.

My friend attempted to explain the financial ups and downs of being a working artist. Yes. There had been a dry spell in the “income department” in recent years, but her expenses were legitimate. Art was her business, her life, her passion–not a mere hobby. The auditor was completely puzzled. “But if you aren’t making any money creating art,” he asked, “why do you keep doing this year after year?” 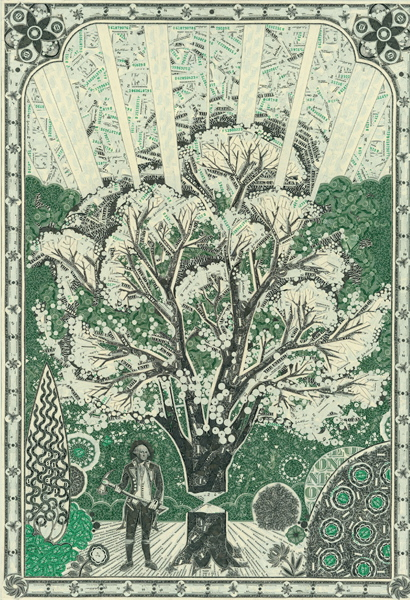 "The one dollar bill is the most ubiquitous piece of paper in America," says artist Mark Wagner. "Collage asks the question: what might be done to make it something else?" (Photo courtesy Mark Wagner at smokeinmydreams.com) 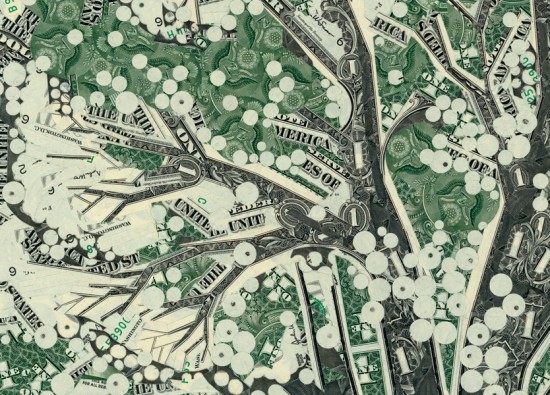 A detail of the above currency collage by artist Mark Wagner (Photo courtesy Mark Wagner at smokeinmydreams.com)

The Idea of Art is Free

I love this story because it says so much about the profit-oriented culture we inhabit as artists (and when I say “artists,” I define that term broadly to include writers, performers, designers, filmmakers, composers, visual artists, etc.).

For most artists I know, money is a constant source of anxiety because most creative projects don’t make economic sense. As artists, we have chosen an alternative paradigm to the profit-oriented one. This doesn’t mean that we shouldn’t be smart about the business-side of art making, only that money isn’t our primary motivator.

The concept of creating for its own sake remains a radical concept in our culture. This is one of the central rifts we saw playing out between Wall Street bankers and supporters of the Occupy movement. One camp placed a higher value on profits, while the other a higher value on more elusive qualities like imagination, empathy, and justice.

Of course, if you have your money invested in the stock market, then you want your broker to be greedy with your money–you want to earn 6%, not 4% like everyone else. But when it comes to art, greed turns the best ideas sour. It isn’t hard to sniff-out the difference between work that was created from a free, deep place, and a blatant commercial commodity.

You may be able sell the end product of art–the concert ticket, the photograph, the book–but the idea itself is free. Art is a gift, and like all gifts, it must be shared in order to make an impact. 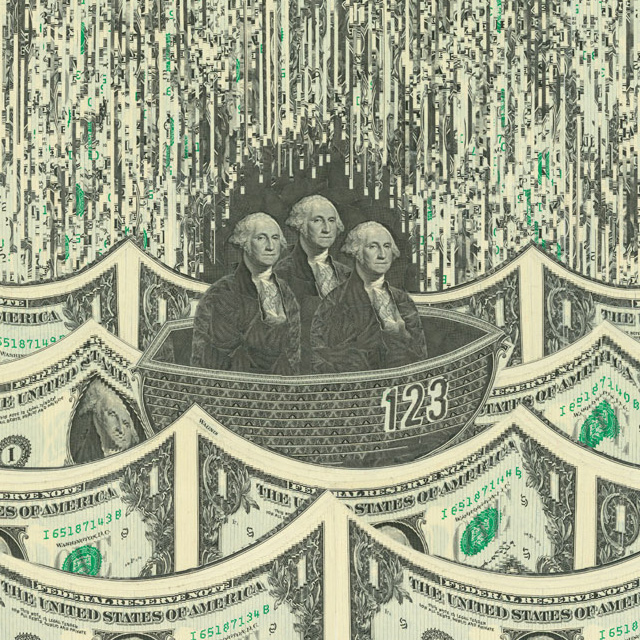 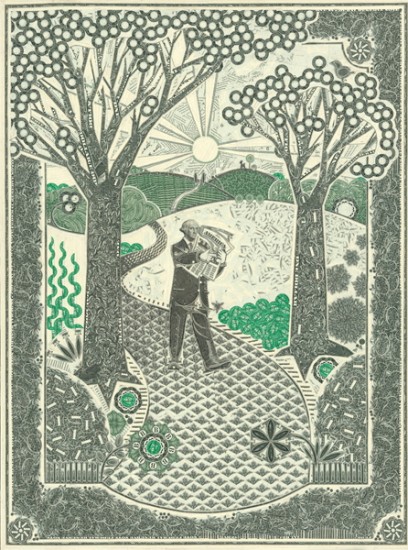 "For most artists I know, money is a constant source of anxiety because most creative projects don’t make economic sense. As artists, we have chosen an alternative paradigm to the profit-oriented one." (Photo courtesy Mark Wagner at smokeinmydreams.com) 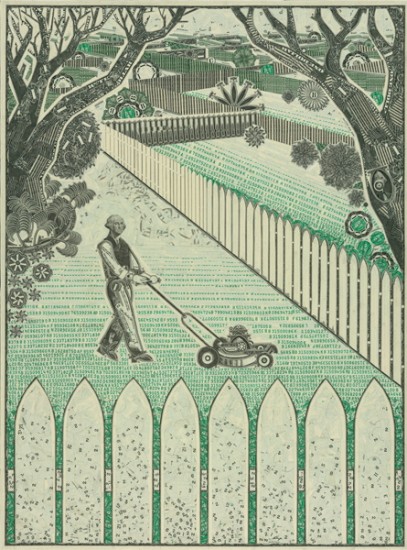 "Fear is normal for an artist--it's the reason we get trapped in the cycle of self-doubt and anxiety, the reason we hesitate to declare a project finished." (Photo courtesy Mark Wagner at smokeinmydreams.com)

Being an artist is so hard because we’re operating in a parallel universe from the larger culture—one that values imagination, creativity, and ideas more than money or status. But a true creative exchange–one in which art is given and accepted without obligation is a way of side-stepping the soul-crushing grimness of consumerism. I would go so far as to say that it’s an alternate way of being. It’s this free exchange between artist and audience that creates movement, provides pleasure, provokes change, and offers meaningful connection.

As writer and MacArthur fellow Lewis Hyde says in his classic book The Gift: Creativity and the Artist in the Modern World, “The gift moves toward the empty place. As it turns in its circle it turns toward him who has been empty-handed the longest, and if someone appears elsewhere whose need is great it leaves its old channel and moves toward him. Our generosity may leave us empty, but our emptiness then pulls gently at the whole until the thing in motion returns to replenish us.”

“Motion” is a key word here, for an artist needs this movement to thrive. “Make the work,” said Walt Whitman. “Just stop thinking, worrying, looking over your shoulder wondering, doubting, fearing, hurting, hoping for some easy way out, struggling, grasping,…Stop it and just DO!” wrote artist Sol LeWitt to his friend Eva Hesse. “All that is important is this one moment in movement,” Martha Graham once said. “Make the moment important, vital, and worth living. Do not let it slip away unnoticed and unused.”

Art that languishes for too long on the hard drive, on the studio wall, or in the murky recesses of the imagination becomes stagnant. At worst, it becomes insular and self-absorbed. “No art is sunk in the self,” observed Flannery O’Connor, “but rather, in art the self becomes self-forgetful in order to meet the demands of the thing seen and the thing being made.”

Fear is normal for an artist–it’s the reason we get trapped in the cycle of self-doubt and anxiety, the reason we hesitate to declare a project “finished.” Our bodies are wired for self-protection. The moment we sense artistic risk or criticism, our “fight or flight” response kicks in. This is perfectly natural, but if we aren’t careful, we can get stuck in this place, unconsciously filling our time with research, editing, re-evaluating, re-writing, re-working (the artist’s version of “flight”). 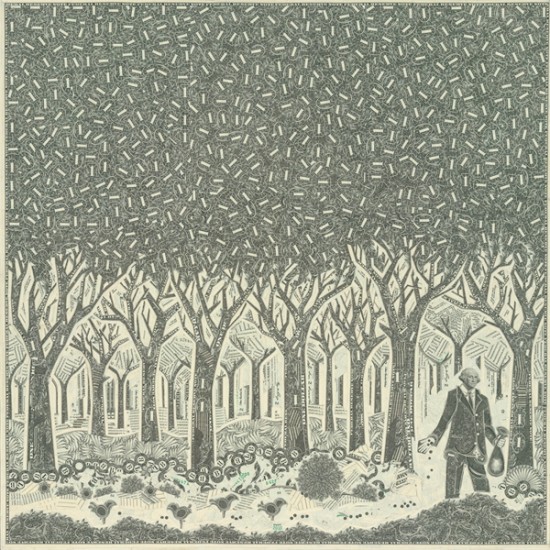 "A true creative exchange--one in which art is given and accepted without obligation is a way of side-stepping the soul-crushing grimness of consumerism." (Photo courtesy Mark Wagner at smokeinmydreams.com) 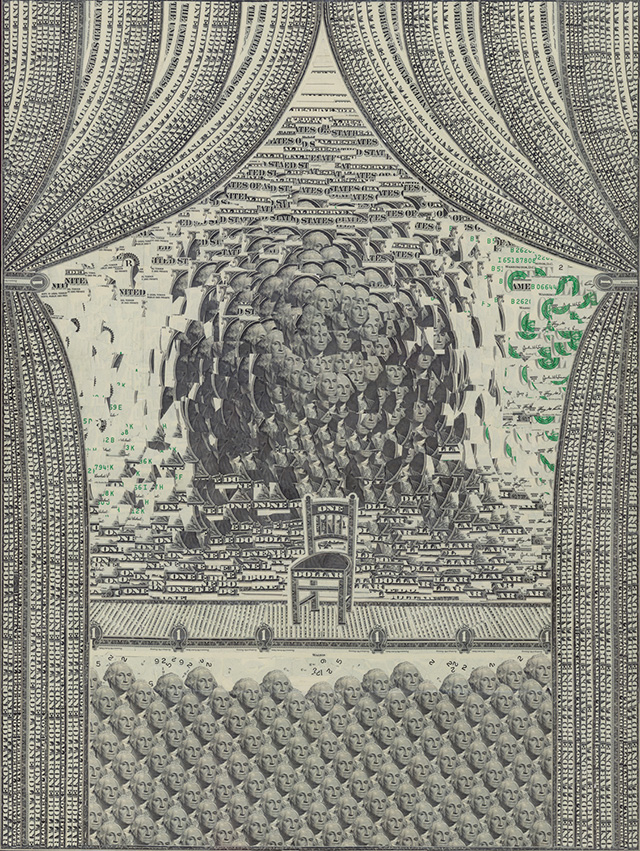 A currency collage by Mark Wagner. See more at markwagnerinc.com 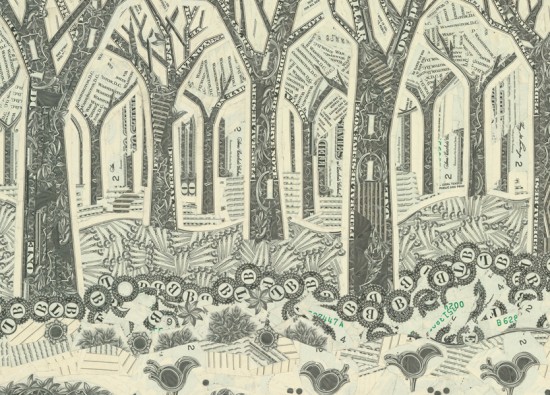 Artists Can’t Begin With the Market

In Journal of a Solitude, May Sarton writes: “There is only one real deprivation,…and that is not to be able to give one’s gift to those one loves most…The gift turned inward, unable to be given, becomes a heavy burden, even sometimes a kind of poison. It is as though the flow of life were backed up.”

This doesn’t mean that stillness isn’t important–it’s key to the creative process–but at some point we have to let go and allow our work to be subjected to the marketplace. “The artist who hopes to market work that is the realization of his gifts cannot begin with the market,” Hyde explains in his book. “He must create for himself that gift-sphere in which the work is made, and only when he knows the work to be the faithful realization of his gift should he turn to see if it has currency in that other economy. Sometimes it does, sometimes it doesn’t.”

A fat bank account may be the sign of a successful stock broker, but a bank balance is the last way to judge the quality of an artist’s work. It is the act of creation and completion that matters in the end. The doing. Not the accolades or silence of the marketplace.

The best art emerges from the tension of these opposing impulses: fear and fearlessness, discipline and play, desire and acceptance, solitude and community, intellect and emotion, success and failure, giving and receiving.

“The passage into mystery always refreshes,” says Hyde in The Gift. “If, when we work, we can look once a day upon the face of mystery, then our labor satisfies…It is when the world flames a bit in our peripheral vision that it bring us jubilation and not depression…for we are only alive to the degree that we can let ourselves be moved.” 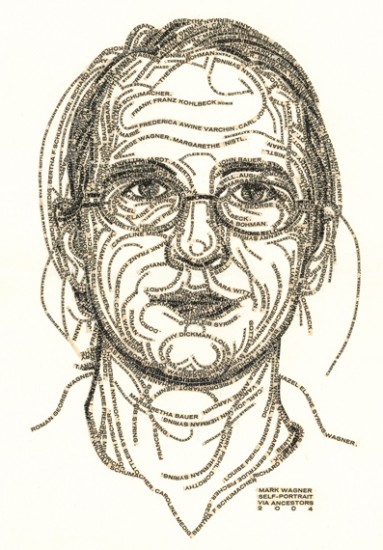 Artist Mark Wagner is co-founder of The Booklyn Artists Alliance, and has published books under the name Bird Brain Press and X-ing Books. His work is collected by dozens of institutions including the Museum of Modern Art, The Walker Art Center, the Library of Congress, and the Smithsonian Institution. It has shown at The Metropolitan Museum, The Getty Research Institute, and The Brooklyn Museum. “The one dollar bill is the most ubiquitous piece of paper in America,” says Wagner. “Collage asks the question: what might be done to make it something else? Blade and glue transform it–reproducing the effects of tapestries, paints, engravings, mosaics, and computers—striving for something bizarre, beautiful, or unbelievable… the foreign in the familiar.” For more information on Wagner’s work, visit his website.