Downton Abbey : You’re Awful, But We Love You

Downton Abbey : You’re Awful, But We Love You 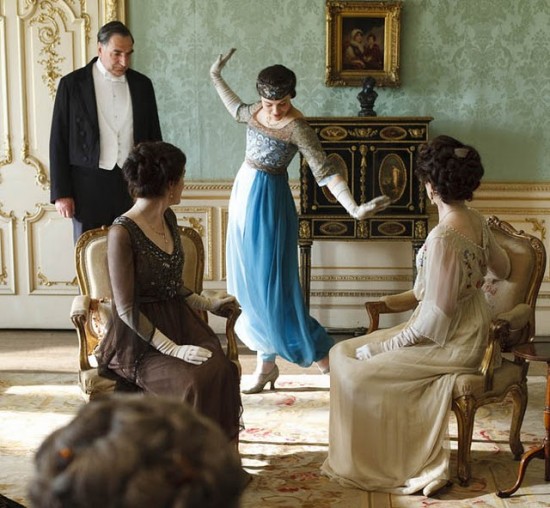 If you’re going through Downton Abbey withdrawal, you’re not the only one. The season finale of the series earned PBS its highest ratings in years with 5.4 million people tuning in to watch the conclusion of the second season.

It’s been fascinating to witness the show’s popularity across all age groups. My young friends have been streaming the show from the PBS website, and mothers, daughters, husbands, and friends have been gathering together on living room couches on Sunday evenings. A few weeks ago, I was visiting my friend’s 92-year-old grandmother in the local retirement home on a Sunday night and was greeted with a British invasion of blaring television sets. As I walked through the corridor, Maggie Smith bellowed from behind the closed door of each and every room I passed.

According to websites that keep track of such things, a third season of Downton is in the works and Shirley MacLaine has been added to the cast of the popular show. But until today, this was all I knew about the elusive third season.

Thanks to British composer Peter Wyer, whose opera Numinous City has been featured on Gwarlingo, we may have proof that a third season of Downton Abbey is being filmed in London as we speak. Yesterday, the composer was walking down Waterloo Place (between Pall Mall and The Mall ) and had a chance encounter with this film shoot. One woman in the crowd confirmed that she had seen one of the stars from the popular series. Pete snapped these photos while he was passing by and kindly gave me permission to share them. 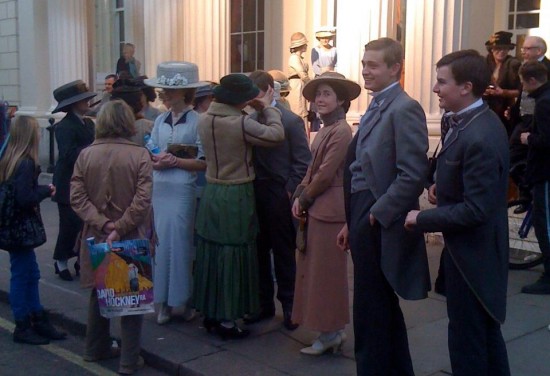 British Composer Peter Wyer had a chance encounter with a Downton Abbey film shoot this week while walking the streets of London near Pall Mall and Waterloo Place. (Photo © Peter Wyer) 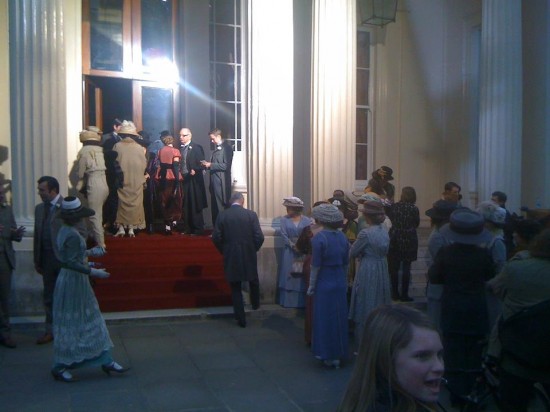 A candid photo from the film set of Downton Abbey's third season. Can someone please get me a pair of the shoes being worn by the lady in green? (Photo © Peter Wyer)

All of these well-dressed extras milling about looks like a potential wedding scene to me. And if it is Downton, what better excuse than a wedding for Lady Cora’s mother, played by Shirley MacLaine, to make the long journey from America?

Today The Sun published the first photograph of MacLaine in her Downton Abbey attire. Rumor has it that during the third season, Lady Cora’s mother, Martha Levinson, will clash with the matriarchal Dowager Countess – played by Dame Maggie Smith. With the right script, it’s easy to imagine the sparks flying between MacLaine and Smith. Let’s hope that writer Julian Fellowes is up to the challenge. Fellowes has recently said the theme of Catholicism would be touched upon in the new season. 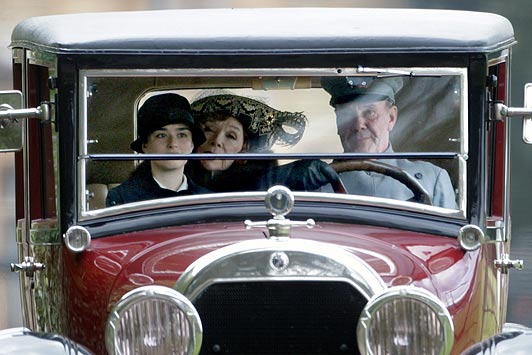 Rumor has it that Lady Cora's mother, played by Shirley MacLaine, will clash with the Dowager Countess-–played by Maggie Smith during the third season of Downton Abbey. (Photo © Flynet Pictures via The Sun)

If, like me, you suddenly feel the need to purge the Rupert Murdoch aftertaste, perhaps this essay by James Fenton from The New York Review of Books will serve as a palette cleanser. In “The Abbey that Jumped the Shark,” Fenton takes a few affectionate jabs at the PBS series (the show isn’t gay enough, Lady Edith would never have outed her sister to the Turkish Ambassador, Downton is shot in the South of England, when it’s set in the North, etc.)

I do agree with Fenton that the plot twist with the disfigured soldier was one too many, but surely there are sharper criticisms that could be made? There is the over-the-top melodrama and hammy dialogue (both are more prevalent in the second season), plus the too-good-to-be-true timing of certain events. (Matthew suddenly appearing at Downton at the very moment Mary is rousing the soldiers and staff with a sentimental song was one coincidence I found particularly irksome).

Fenton does make a few amusing points. I particularly like his observation that no other culture has a country house tradition in literature and film like England does:

“The greatest rival to the English country house tradition is the Russian, with its rich suggestions of a feudal system in decline, and with its great questions hanging in the air: How shall I live to some purpose? How can I reform the world I know? Those who ask such questions may be querulous and ineffectual, but the questions themselves are intelligent and profound, whereas the great questions that hang over the English country house come, for the most part, from the far side of stupid: Can I score a personal triumph at the flower show while forgoing first prize for my roses? Can I secure my lord’s affection by pretending to go rescue his dog? (The answer Downton Abbey offers is yes in both cases.)”

Yes…”How shall I reform the world I know?” versus “Can I score a personal triumph at the flower show?” This sums up the situation nicely. 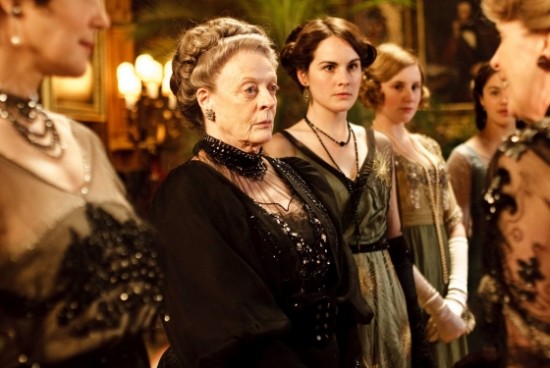 It's hard not to love the period costumes and sets, those hilarious Maggie Smith quips, Sybil's love of radical ideas, radical clothes, (and radical chauffeurs), and the sneers of Thomas and O'Brien during their gossipy cigarette breaks. (Photo courtesy PBS)

While I found Fenton’s essay entertaining, I thought The Guardian‘s Viv Groskop was more on target with her comparison and critique of the first two seasons (Spoiler alert: if you haven’t seen the entire series, you may want to skip this passage)…

Perversely, given that creator Julian Fellowes has tried to cram so much into this series, the story has lacked any real detail. Series one was at its best when it concentrated on minute plot points – a missing bottle of wine, a bitchy moment between two sisters, Mrs. Patmore’s failing eyesight – and made us care about them. Because Downton has such a superb cast, this worked brilliantly: it was all about rivalry, betrayal, repressed sexuality, humiliation, passion, ambition. And all the action happened on the actors’ faces.

Crucially many of series one’s most perfect moments happened off-stage: the untimely death of Mr. Pamuk (“Poor Kemal!”), the theft of the snuff box, O’Brien placing the soap next to the bath. What mattered was not the events themselves, but the characters’ reactions. Series one was seen exclusively in close-up. In series two we’ ve pulled too far away from the actors to care.

That said, it has been absolutely hilarious (apart from when William died and I cried for the entire episode). Personally I am torn between feeling utter betrayal and total delight. Which strikes me as a very Downton place to be. Could it be that series two is actually better because it is worse?

As Groskop says, “Downtown Abbey: you are awful…but I like you.”

I’m in full agreement. Who cares? It’s hard not to love the period costumes and sets, those hilarious Maggie Smith quips, Sybil’s love of radical ideas, radical clothes, (and radical chauffeurs), and the sneers of Thomas and O’Brien during their gossipy cigarette breaks. The pleasures outweigh the annoyances.

As I said at the beginning, this is more like a delectable cream puff than an entree. Granted, ceam puffs aren’t high art, but they are artful–tasty, beautiful, pleasurable, and much harder to make than those Toll House cookies that come in the plastic tube. 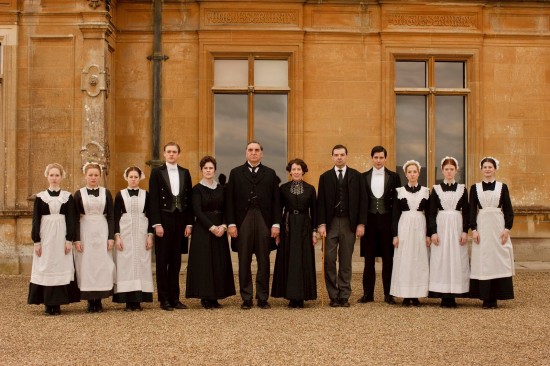 Support Gwarlingo by making a donation of any size. Your help keeps this site going!