A Day in the Life of a Homeless Piano: A Short Film by Anthony Sherin

A Day in the Life of a Homeless Piano: A Short Film by Anthony Sherin 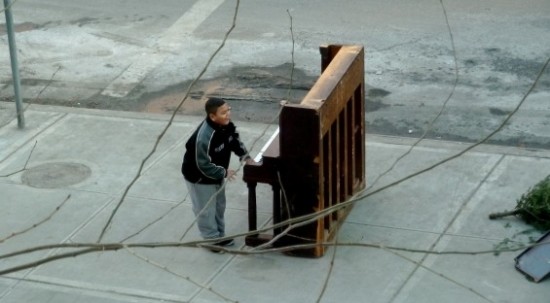 One of the images from Anthony Sherin’s Solo, Piano – N.Y.C.

Since creating its controversial pay wall in 2011, The New York Times has continued to explore new ways of merging storytelling with technology. Their recent multi-media piece “Snowfall: The Avalanche at Tunnel Creek” is an impressive glimpse at the future of web publishing as we move into the new era of HTML5.

Another Times addition that has become a personal favorite of mine is Op-Docs, a “forum for short, opinionated documentaries, produced with wide creative latitude and a range of artistic styles, covering current affairs, contemporary life and historical subjects.”

The series is produced and curated by filmmaker Jason Spingarn-Koff (@jskoff), who does an exceptional job finding thought-provoking content. The films are created by both emerging and established artists and are told from a first-person point of view.

Anthony Sherin’s Solo, Piano – N.Y.C. is one of the films featured in The New York Times’ Op-Docs series

This five-minute short, Solo, Piano – N.Y.C,  by New York-based filmmaker Anthony Sherin caught my attention a few weeks ago, and I haven’t been able to purge the images from my mind since. To me, Sherin’s piece, and the Op-Docs series as a whole, is the perfect way to tell a story online. These short films are both intimate and personal and offer glimpses of everyday life that we would otherwise not be privy to. In other words, they’re the very antithesis of big-budget, commercial filmmaking.

“Making this film was pure serendipity. After a January snowstorm in New York City, I decided to do some work on another film, in my home in Washington Heights. But as I approached my desk, I thought I heard a piano plinking. I looked out the window and saw a piano on the curb below. I was mesmerized by the pattern that emerged. Passers-by would slow, stop and play. Some played well. All day long they collected and dispersed, and into the night they measured, shoved and deliberated the piano’s fate. (If it stayed on the sidewalk, the city could have issued a fine.) I was riveted. Pianos have histories. No one who stopped seemed eager to leave it behind. Their thoughts were obvious: Can we take it? Who abandons a piano? Is it worth anything?

I eventually started snapping stills and thought I would end up with just that — a lot of stills. To my surprise, I discovered after 24 hours that I had captured a story with a beginning, middle and end. My friend Art Labriola created an original piano score, and I had a film. It has screened at several festivals, and I’m pleased to share it with the world on Op-Docs.”

This quiet, poignant piece of storytelling has haunted me since I saw it. (You have watch the entire five-minute film to understand the narrative arc, so don’t abandon Sherin’s piece too soon.) I hope you find Solo, Piano – N.Y.C. as moving as I did.

(Can’t see the film in your email? Click here to watch the video on the Gwarlingo website.)

As I noted in my Christmas post, there is no Sunday Poem this week because I’m currently taking a working vacation in Philadelphia. I have some talented poets in the queue, however, and look forward to sharing their work with you soon. Enjoy your Sunday!

Donate to Gwarlingo Before 2012 Ends

There’s still time to donate to the Gwarlingo Membership Drive in 2012. Instead of selling out to advertisers, I’m “selling out” to my readers instead and raising money for a Gwarlingo podcast and design improvements to the site. 75+ Gwarlingo readers have contributed so far and just over $5500 of the $15,000 goal has been raised.

The interactive Member Profiles available to donors who give $50 are more are proving to be very popular. If you haven’t donated yet, you can check out my video and all of the member rewards here on the Gwarlingo site.

A special thanks to all of the artists who made their work available for this fundraiser: Bill Jacobson, Cindy Kleine, Rachel Perry Welty, Barry Underwood, Margaret Lanzetta, Matthew Northridge, and Anna Schuleit. Check out the work they are offering here.