the other day I was shopping

in one of those giant incredibly brightly lit stores

you can apparently see from space

why do I go to sleep

not having brushed my teeth and dream

of the giant failure

on the loudspeaker was a familiar song

there were no lyrics but I remember

it says we are all skyscrapers

under one blue rectangle that never chose us

to be these sentinels

and watch people far below

the world is old

and full as it will always be

of commerce and its hopeful non profit mitigations

future products from the Amazon

will cure ailments we have

and also ones not yet invented

looking down I saw my cart was full

of a few boxes of some cereal I do not recognize

made of some kind of vegetable

and then I passed an entire row of plastic flowers

and wanted to be the sort of person

who bought them all

but really I am a runway covered in grass

and all I truly love is sleep

I like the word pocket. It sounds a little safely
dangerous. Like knowing you once
bought a headlamp in case the lights go out
in a catastrophe. You will put it on your head
and your hands will still be free. Or
standing in a forest and staring at a picture
in a plant book while eating scary looking wild flowers.
Saying pocket makes me feel potentially
but not yet busy. I am getting ready to have
important thoughts. I am thinking about my pocket.
Which has its own particular geology.
Maybe you know what I mean. I mean
I basically know what’s in there and can even
list the items but also there are other bits
and pieces made of stuff that might not
even have a name. Only a scientist could figure
it out. And why would a scientist do that?
He or she should be curing brain diseases
or making sure that asteroid doesn’t hit us.
Look out scientists! Today the unemployment rate
is 9.4%. I have no idea what that means. I tried
to think about it harder for a while. Then
tried standing in an actual stance of mystery
and not knowing towards the world.
Which is my job. As is staring at the back yard
and for one second believing I am actually
rising away from myself. Which is maybe
what I have in common right now with you.
And now I am placing my hand on this
very dusty table. And brushing away
the dust. And now I am looking away
and thinking for the last time about my pocket.
But this time I am thinking about its darkness.
Like the bottom of the sea. But without
the blind florescent creatures floating
in a circle around the black box which along
with tremendous thunder and huge shards
of metal from the airplane sank down and settled
here where it rests, cheerfully beeping. 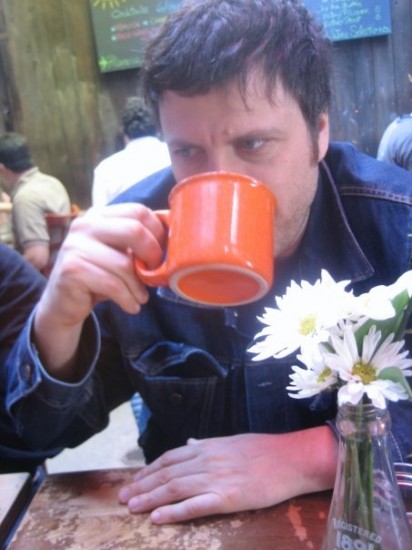 Matthew Zapruder is the author of three collections of poetry: American Linden (Tupelo Press, 2002), The Pajamaist (Copper Canyon, 2006), selected as the winner of the William Carlos Williams Award from the Poetry Society of America, and Come on All You Ghosts, published by Copper Canyon in Fall of 2010. Come On All You Ghosts was the 2010 Goodreads Readers’ Choice selection for poetry, and also was selected as one of the year’s top five poetry books by Publishers Weekly, as well as the 2010 Booklist Editors’ Choice for poetry, and the 2010 Northern California Independent Booksellers Association poetry book of the year.

Zapruder is co-translator of Secret Weapon, the final collection by the late Romanian poet Eugen Jebeleanu (Coffee House Press, 2007). His collaborative book with painter Chris Uphues, For You in Full Bloom, was recently published by Pilot Books in 2009.

His poems, essays and translations have appeared or are forthcoming in many publications, including Open City, Bomb, Harvard Review, Paris Review, The New Republic, The Boston Review, The New Yorker, McSweeney’s, and The Believer. In Fall 2007 he was a Lannan Literary Fellow in Marfa Texas, and he was a recipient in 2008 of a May Sarton prize from the American Academy of Arts and Sciences. 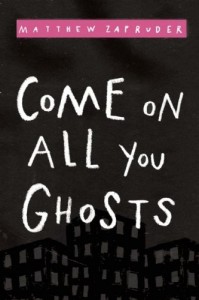 Zapruder currently teaches poetry as a member of the permanent faculty of the Juniper Summer Writing Institute at the University of Massachusetts in Amherst, and is a member of the core faculty of the low residency MFA program at UC Riverside-Palm Desert. The recipient of a 2011 Guggenheim Fellowship, he lives in San Francisco, where he is an editor for Wave Books.

As Dana Jennings noted in the New York Times, Zapruder has a “razor eye for the remnants and revenants of modern culture.” In a Los Angeles Times article, Zapruder discussed the role of rhyme in his work: “

[T]he rhyme is what I would call ‘conceptual,’ that is, not made of sounds, but of ideas that accomplish what the sounds do in formal poetry: to connect elements that one wouldn’t have expected, and to make the reader or listener, even if just for a moment, feel the complexity and disorder of life, and at the same time what Wallace Stevens called the ‘obscurity of an order, a whole.’”

Check out the Gwarlingo Store for some of my favorite poetry books. Your purchases benefit this site.

“Poem Without Intimacy” and “Pocket” © Matthew Zapruder. “Pocket” originally appeared in Come on All You Ghosts, Copper Canyon, 2010, and was reprinted with permission from the author.