Soon it will be winter and soon
a nightingale with a bandaged throat,
a plum tree in bloom, and a white
hill pushed up against the door.

Illness arrives like Mozart,
sits down at the black piano
and its voice touches with a single note.

It sails along, the fool, not knowing —
can’t brush the wave from its eyelash.

Somewhere a shutter bangs shut,
and you bend toward the sketch.
Mozart creates like a god!
And the two of us, childless.

We’d be husband and wife,
together forever it seemed.
But burned by Greeks and barbarians
we fled, leaving no trace. 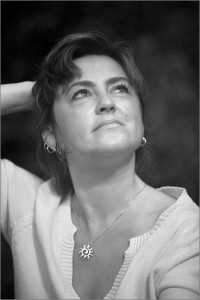 Anzhelina Polonskaya was born in Malakhovka, a small town near Moscow. She began to write poems seriously at the age of eighteen. At that time she was a professional ice-show skater. Between 1995 and 1997 she lived in Latin America, working as an ice dancer. Her first book of verses Svetoch Moi Nebesny (My Heavenly Torch) appeared in 1993. In 1998, the Moscow Writer’s Publishing House published her second book Verses. The Sky in a Private’s Eye followed in 1999. In 2002 her book Golos (A Voice) was published in Moscow; an English version of A Voice was shortlisted for the 2005 Corneliu Popescu Prize for European Poetry in Translation.

Polonskaya has been a fellow at the Cove Park Scottish Arts Council, the Hawthornden International Retreat for Writers, The MacDowell Colony, Bellagio, and the Villa Sträuli in Zurich. Translations of her poetry have appeared in World Literature Today, Poetry Review, American Poetry Review, and the International Poetry Review. In 2012 a bilingual edition of her new poems titled Paul Klee’s Boat will be published by Zephyr Press.

On October 22, 2011 Kursk: An Oratorio Requiem–a collaboration between Polonskaya and composer David Chisholm–will premiere at the Melbourne Festival. The libretto for Kursk consists of ten of Polonskaya’s poems, which are a tribute to the 118 lives lost in the tragic sinking of the Kursk submarine in August of 2000. For more information about Anzhelina Polonskaya, please visit her website.

Looking for a great book to read? Check out the new Gwarlingo Store–a hand-picked selection of some of my favorite books. All of your purchases directly support this site.