Can Christmas Music Ever Be Cool? The Real Reason Dylan Made the Critics Squirm

Can Christmas Music Ever Be Cool? The Real Reason Dylan Made the Critics Squirm 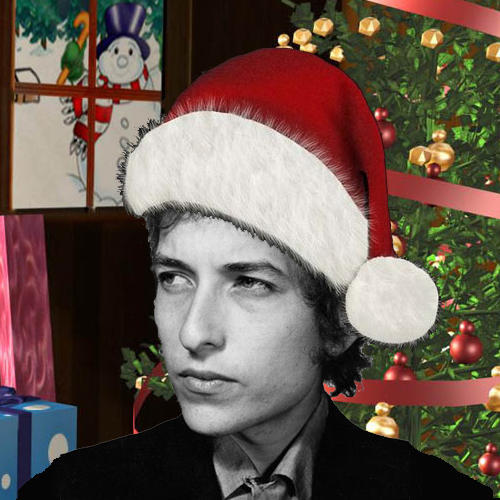 It’s time to discuss a topic more divisive than religion, more inflammatory than right versus left or the 99% versus the 1%. A topic that will either make your eyes twinkle or your blood boil.

There are two distinct camps when it comes to this subject: the lovers and the haters, and never the twain shall meet. The hipsters and aficionados who love to hate Christmas music deride its sentimentality, kitschiness, and commercialism. And the Christmas music lovers (the ones who put the first Christmas carol on the stereo before the Thanksgiving leftovers have been safely secured in the fridge) accuse the haters of being scrooges–no fun and too sophisticated for their own good.

The case of Bob Dylan wonderfully exemplifies this musical rift. In 2009 when Dylan announced that he would be releasing a Christmas album with the alarming title Christmas in the Heart, nervous critics panicked and attempted to cover for their hero’s lack of judgment by explaining that Dylan’s holiday album was “ironic.”

But Dylan didn’t cooperate. He disputed the claim, saying although he is Jewish, the songs were part of his Minnesota childhood. “These songs are part of my life, just like folk songs,” he told Bill Flanagan. “You have to play them straight…Critics like that are on the outside looking in. They are definitely not fans or the audience that I play to. They would have no gut level understanding of me and my work, what I can and can’t do — the scope of it all. Even at this point in time they still don’t know what to make of me.”

Dylan simply brushed off the musical establishment’s bafflement and proceeded to donate all of the profits from his best-selling album to charity. 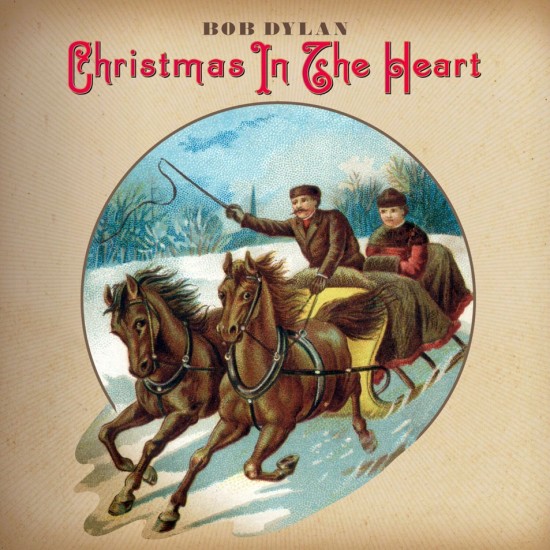 Bob Dylan understood something that many of his critics didn’t. He understood that all music is nostalgic. Whenever we hear a song, it is forever tied to a specific time and place in our lives. From that point forward, whenever we hear that song again, we evoke that past experience, while simultaneously adding another layer of association.

Music always contains these layers of memory. For Dylan, Christmas music was closely linked to his Minnesota childhood. Instead of ignoring or dismissing this part of his past, he chose to embrace it instead. In many ways, Dylan’s sincerity for this project was a radical act. It was unexpected and, for some critics, not in keeping with his image as a cutting-edge, creative artist.

Music’s close connection with memory is one of the reasons it is so tied to personal taste. This is true of Christmas music in particular. Songs like Nat King Cole’s “The Christmas Song” or Perry Como’s “There’s No Place Like Home (For the Holidays)” are steeped in memories of Christmases past, both good and bad.

Is it any wonder the holidays are stressful? While we might dream of sitting around the fire with our loved ones, dressed in our hand-knit Christmas sweaters and sipping eggnog, this isn’t reality. Comparing our lives to a Christmas song or a dreamy album cover is a sure-fire way to make yourself miserable. 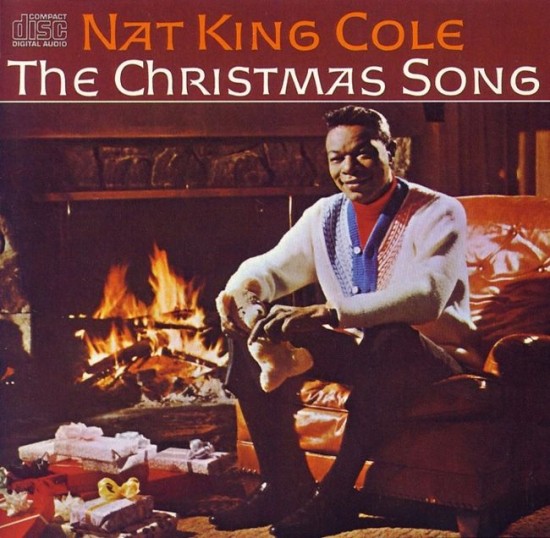 Musical taste taps into some of our deepest ideas about personal identity, about where we come from, and where we want to go. It can be a badge of belonging or exclusion, or even a way of gaining prestige. As the French sociologist Pierre Bourdieu argues, taste is never disinterested. Our judgments are a form of social currency that place us within a certain social class or community.

Dance parties and holiday gatherings are ripe environments for these musical divisions to play out in dramatic fashion. As long as Aretha Franklin or The Talking Heads are playing, most people are happy, but the minute you break out the ABBA, Madonna, Gene Autry, or any other artist with a high campiness factor, the grumbles will begin. You can actually feel the wave of condescension as the hardcore hipsters and tastemakers migrate to the edges of the room in protest.

But is it really the music we’re arguing over, or is it our own ideas about who we are (or who we were as our younger selves) and who others should be? There are many reasons to like or disdain a certain piece of music, and few of them have to do with quality. Our own personal baggage drives the bus of taste more than we’d like to admit.

Personally, I don’t mind a few cornball standards at the holidays. I could live without the 24/7 Christmas music barrage when I’m shopping for toilet paper at the local CVS. And those songs about grandmother getting run over by a reindeer and the Christmas donkey? Do I even have to say it?

Here are a few of my own personal holiday music favorites. Granted, not all of these albums are strictly “Christmas” music. I only know that listening to these records reminds me of decorating the Christmas tree, baking cookies with my mother, and my grandfather’s annual Christmas ritual–grinding the family’s only knife down to a nub on the electric knife sharpener in preparation for the big turkey carving. 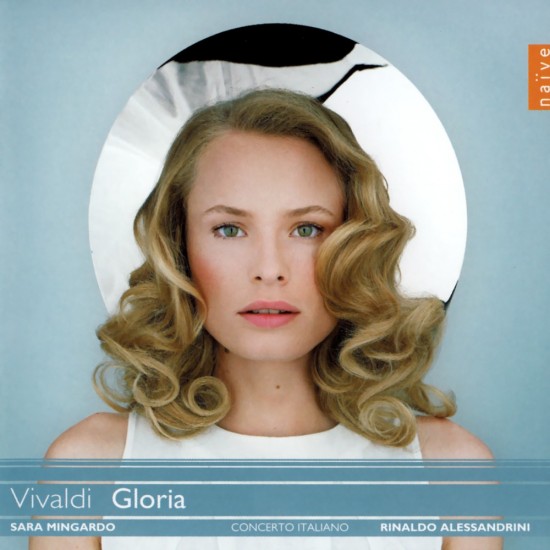 Antonio Vivaldi’s “Gloria” RV 588 and RV 589. Vivaldi’s “Gloria” has grown in popularity in recent years and for good reason. The opening movement’s joyous chorus is the perfect music for dark, winter days. There are no samples of this album available online, but this movie excerpt by filmmaker Philippe Béziat will give you some sense of Ronaldo Alessandrini’s conducting style. This is a particularly fast version of “Gloria,” but it works. In this clip Alessandrini conducts Concerto Italiano as they perform the opening chorus from Vivaldi’s “Gloria” in the beautiful auditorium at the Church of Crema in Italy. (Click on album cover for more information) 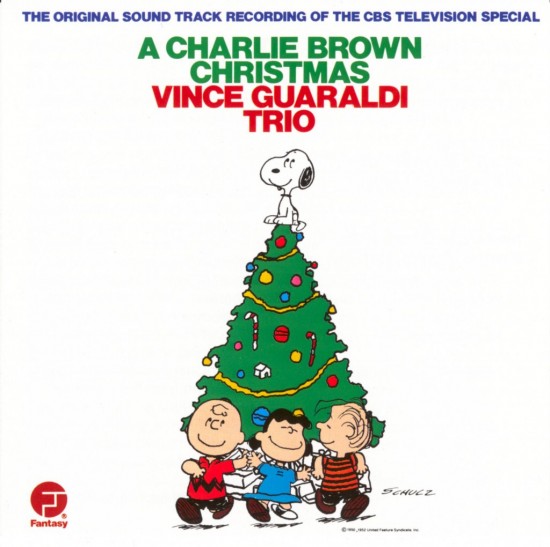 A Charlie Brown Christmas by the Vince Guaraldi Trio Sure, it’s nostalgic. Vince Guaraldi’s tunes conjure memories of poor Charlie Brown, ice skating, that funny Peanuts dance, and that measly Christmas tree. But the music is pretty fantastic too. (Click on album cover to preview in iTunes) 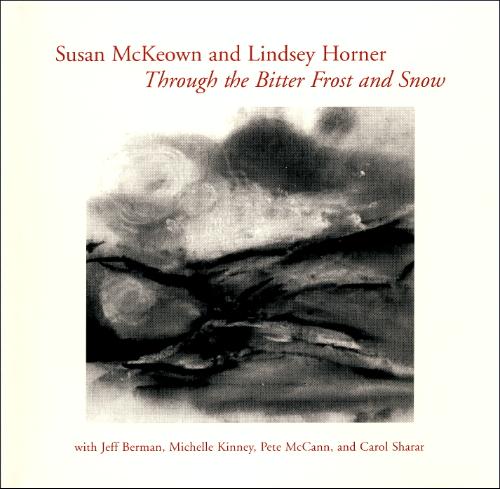 Through the Bitter Frost and Snow by Susan McKeown and Lindsey Horner I didn’t realize I would miss Susan McKeown’s captivating voice and Lindsey Horner’s light, jazzy bass until this album mysteriously disappeared during a move. I found that I couldn’t live without this stark, haunting album, so I went out and bought it a second time. Through the Bitter Frost and Snow is brimming with quiet acoustic songs that pay homage to winter. I doubt you’ll find a better rendition of “Auld Lang Syne” anywhere. 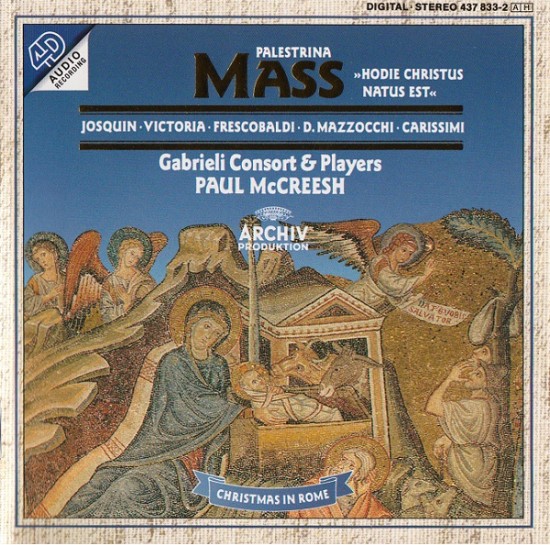 Christmas Mass in Rome by the Gabrieli Consort and Players The human voice remains one of my favorite instruments, and as this recording proves, the voice is all you need to produce beautiful, compelling music. This version of Palestrina’s Mass is breathtaking. You don’t have to be religious or Catholic to appreciate the moving choral work of early composers like Josquin and Palestrina. Once, I was playing this album while placing an online Christmas order over the telephone. “Where are you?” the customer service rep asked. “It sounds magical.” (Click on album cover for more information.)

Here is a video of the Gabrieli Consort & Players performing the opening piece from the album–“Motet: Præter rerum seriem” by Josquin Desprez. 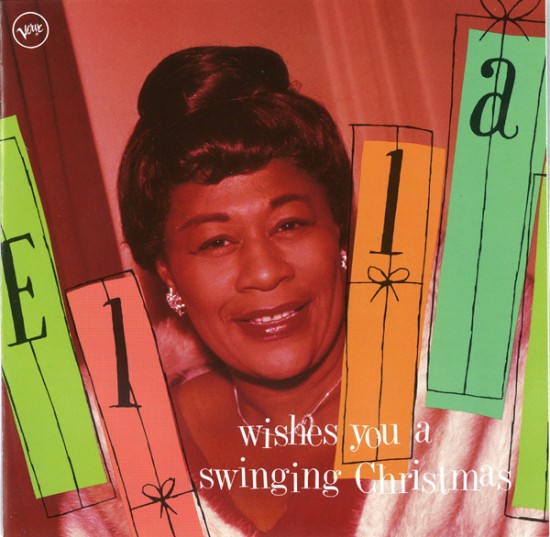 Ella Wishes You a Swinging Christmas by Ella Fitzgerald This Ella Fitzgerald classic, which was originally released by Verve in 1960, remains one of the swing-ingest, sexiest Christmas albums around. “Sleigh Ride” will make you dance, and “What are You Doing New Year’s Eve?” will break your heart. (Click on album cover to preview in iTunes.)


So what are own guilty Christmas-music pleasures? Which holiday albums do you play this time of year, which ones do you avoid, and why? I’d love to hear your suggestions in the “Comments” section below or on the Gwarlingo Facebook page.